Eye test app ‘is as accurate as a chart’

The portable eye test app, Peek, has been shown to work as well at testing sight as a visual acuity chart 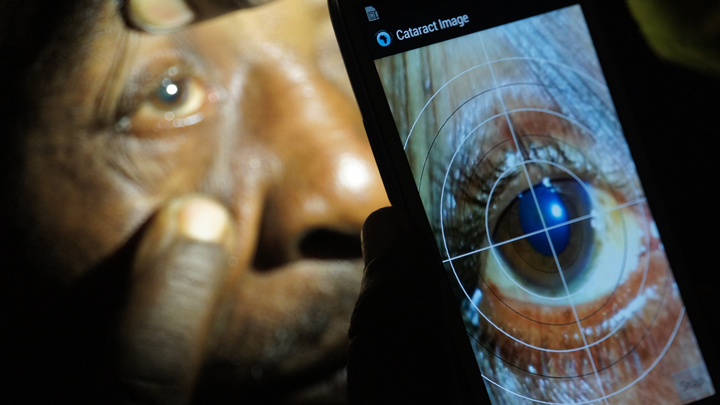 A portable eye examination kit (Peek), which uses smartphones to test the sight of people remotely, has been shown to be as accurate as a traditional visual acuity chart.

Peek consists of a series of apps which can be connected to a piece of hardware called ‘Peek Retina’. It was designed in collaboration with scientists at the London School of Hygiene & Tropical Medicine, the University of St Andrews, and NHS Greater Glasgow and Clyde.

Published in JAMA Ophthalmology, researchers tested participants using ‘Peek Acuity’, which determines how clearly an individual sees. Eye examinations were performed on 233 people in their own homes in Kenya, before being repeated in eye clinics across the African country on two consecutive days.

Consequently, researchers found that the tests performed with Peek were as reliable as those from standard paper-based charts and illuminated vision boxes in an eye clinic.

The tests performed in patients' homes found that Peek produced results “to a clinical level equivalent to the much larger and more expensive standard electricity-dependent chart – the average difference being the equivalent of less than one line on an eye chart,” a statement released by the London School of Hygiene & Tropical Medicine reads.

Lead author on the paper and co-founder of Peek, Dr Andrew Bastawrous, explained: “With most of the world’s blind people living in low-income countries, it is vital we develop new tools to increase early detection and appropriate referral for treatment. Mobile phone use is now so widespread that it seemed to be an ideal platform.

“In this study we aimed to develop and validate a smartphone-based visual acuity test for eyesight which would work in challenging circumstances, such as rural Africa, but also provide reliable enough results to use in routine clinical practice in well-established healthcare systems.”

The validation study was completed as part of a wider community study which took place between December 2013 and March 2014.

Dr Bastawrous added: “Our ultimate hope is that the accuracy and easy to use features of Peek will lead to more people receiving timely and appropriate treatment and be given the chance to see clearly again.”