Researchers at the University of Wisconsin-Madison have tackled the challenge of delivering photoreceptors to the retina with a tiny scaffold that resembles an ice cube tray.

The study, which is published in Science Advances, describes a micro-moulded patch designed to be implanted under a damaged or diseased retina. 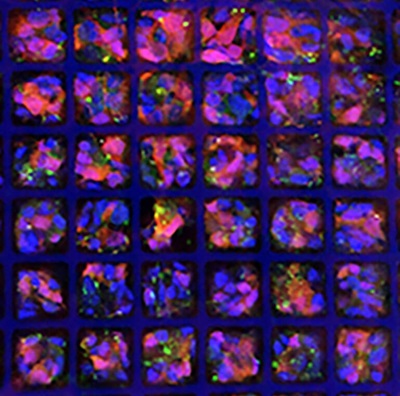 University of Wisconsin-Madison
Photoreceptors grown from stem cells in an ice cube shaped scaffold.
Microscopy revealed that the completed scaffold was capable of holding more than 300,000 photoreceptors in approximately the area of the human macula.

Professor of electrical and computer engineering, Zhenqiang Ma, described the results as “exciting and significant.”

“Once we figured out the recipe, mass production became immediately possible, and commercialisation will be very easy. The fabrication methods can be used to create many other types of soft scaffolds for various biomedical applications,” he highlighted.

The research team is preparing the scaffold patch for surgical testing in large animals. If this step is successful, then the technology will be tested in humans.

David Gamm, director of the McPherson Eye Research Institute, shared his hope that early generation retinal patches will be safe and will restore some vision.

“Then we’ll be able to innovate and improve upon the technology and the outcomes over time,” he highlighted.