“We want this to be the start of the conversation”

Sarah Campion, director of engagement at Fight for Sight, tells OT  about the charity’s Time to Focus research report, which is calling for a doubling of investment in eye health research over the next decade

1. Sight loss touches the lives of millions of people across the UK, and the number is growing every day.

Yet, research for new treatments and cures is desperately under-funded. Put simply, this is a public health crisis that cannot go on. That’s why at Fight for Sight we commissioned our Time to Focus report to show the personal impact and wider costs of sight loss. Time to Focus is the combination of several reports by Fight for Sight and our partners that covers: the cost to the economy; the personal impact on all areas of life; research activity in the UK compared to the rest of the world; and the effect that COVID-19 has had on people living with sight loss and researchers in the sector.

2. It's a really thorough report. There are some interesting findings. We found that sight loss and blindness can impact on every aspect of people's lives.

We did a massive survey of people with sight loss: from their finances and mental health, to relationships and social life. People with severe sight loss actually report lower quality of life than with many other serious conditions, using the standard quality of life measurement. We're not sure if this has been done before, but our research has shown that it's literally one of the lowest, compared to other serious conditions, even depression and advanced breast cancers. Obviously, we think that's a major cause for concern.

We also looked at the economic impact of sight loss, which is vast and wide-ranging. As part of the report, we worked with the London School of Economics (LSE) to develop a new costing tool, based on a review of over 350 academic papers. This costing tool shows that sight loss costs the UK economy £25.2 billion a year – with the majority of these costs lying outside the health and social care system, mainly due to lost productivity through the barriers people with sight loss experience in the workplace and the need for family and friends to provide informal care. Costs to the NHS and social care are also vast, equating to £3.9 billion a year. 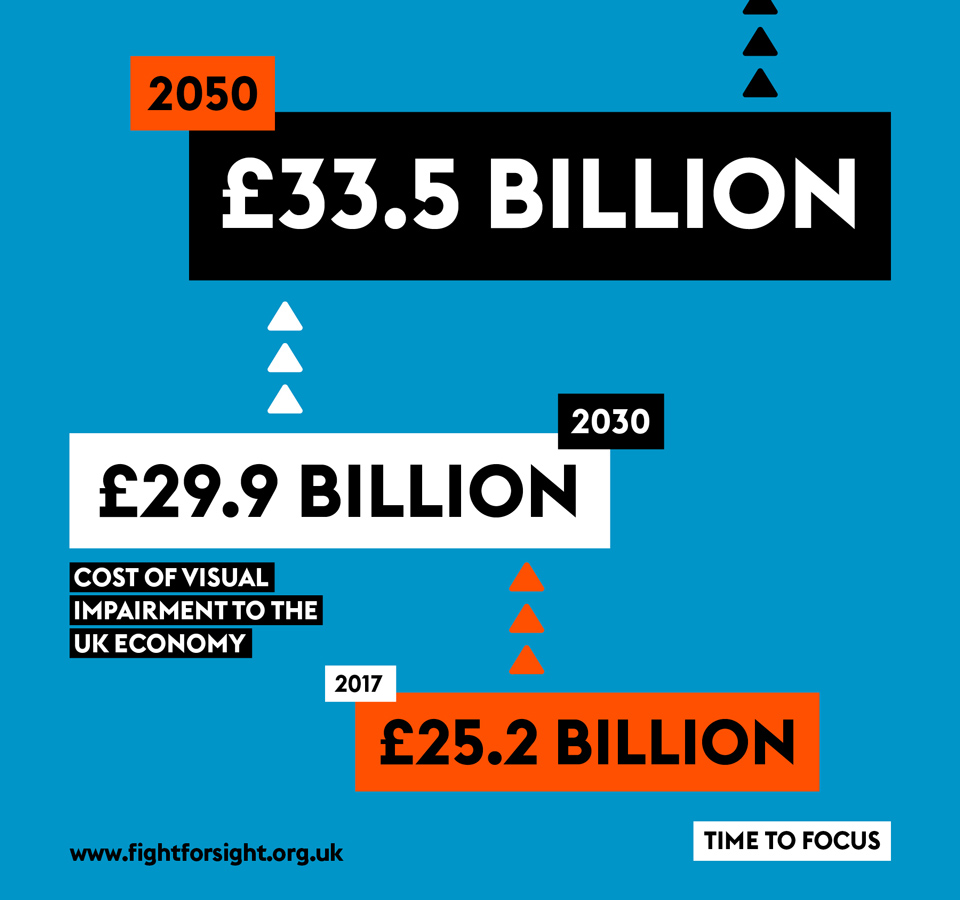 The costing tool shows that if we could reduce the prevalence of sight loss by just 1% year-on-year, through research and prevention measures, not only could we transform lives, but we could avoid billions of pounds in costs to the UK economy. This really makes the case for why it’s in our interest as a society to invest more in research and prevention.

We wanted to ensure that the research was really robust, and that it would be a really useful resource for the sight loss sector, research community and decision makers.

We began by identifying what we wanted to achieve: to demonstrate the huge personal and societal cost of sight loss, and to make the case for urgent investment in eye research. We really want sight loss to be treated as one of the major public health issues of our time. One of our recommendations, our calls to action, is to achieve a doubling of investment in eye research in the next decade, which we think would transform lives and take pressure off an overstretched NHS.

4. In terms of COVID-19, fortunately we'd completed most of our research in February.

We'd done our big survey in January, so that was very lucky. Inevitably, it did change our plans. We put back our original report launch to September, and it became a virtual rather than a physical event. We also revisited some of our research, which we’d just completed, because we wanted to make sure it was still relevant in the pandemic. For example, the partners at London School of Economics, who carried out the health economics modelling for us, used the model to go back and calculate the potential costs of delays in diagnosis - for example - for glaucoma patients who weren’t able to access eye tests during COVID-19. There's a figure in the report showing the cost of those additional delays.

We also went back and did a further survey of people with sight loss. Our big initial survey looked at 800 people with sight loss. In the second one, we had 325 people take part, to understand how they were being affected by COVID-19. We released the results of that in May. We found that two in five were finding it difficult to social distance safely and to access the treatment and services that they needed, and four in ten were concerned that their sight had deteriorated in the pandemic through not being able to access the services and treatment they needed.

Ultimately, new treatments that prevent sight loss are going to take pressure off an overstretched NHS. I believe we still need to push forward that message: that we need urgent investment in eye research

We also surveyed our researchers to find out how they were being affected. We found that more than nine in 10 were unable to access labs, experiencing delays to their research. Inevitably, the pandemic has had a huge impact and has risked bringing vital research to a standstill. We've been doing all we can support researchers in getting back to the lab.

We think COVID-19 has made the case for investment in research even more urgent. Ultimately, new treatments that prevent sight loss are going to take pressure off an overstretched NHS. I believe we still need to push forward that message: that we need urgent investment in eye research. At the moment only 1.5% of grant funding for medical research goes into eye research, although two and a half million people are currently living with sight loss, and it's escalating. We just think it's time for that to shift. Most of the money goes into care and support, which is obviously vital. But even doubling income is actually a relatively small amount. And by doubling investment in eye research you could make a massive difference. 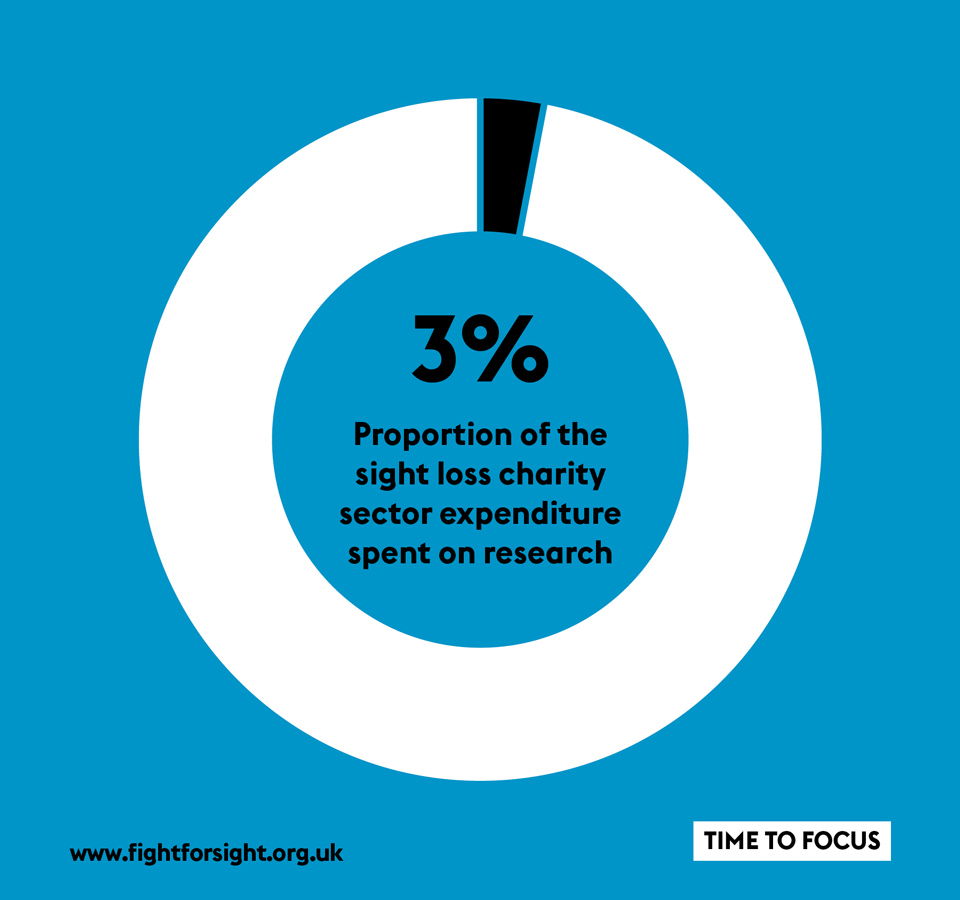 5. We launched the research with an interactive webinar, which was attended by supporters, researchers and decision makers.

We'll be promoting it widely through media, through our own communications channels and to our supporters. Most importantly, we'll be continuing to try and meet with decision makers and government to really discuss the findings and make the case for urgent investment, and also working collaboratively with our partner charities. We want this to be the start of the conversation. There needs to be an ongoing conversation, to tip the balance towards investment and research.

Only 3% of charity expenditure at the moment goes on research. We think it needs to shift

That's not to say investment should be taken away from care and support, which is really vital. But we believe 1.5% investment from national medical research funding isn't enough. If you look at charities, only 3% of charity expenditure at the moment goes towards research. We think it needs to shift. We need to increase the pot and put more in the research side, as well as of course maintaining the current support.

We had other charities involved in the steering group for the report, and we are reaching out to different charities. I think it's about starting that conversation: working with them, working with government, and with industry. We were able to do such a robust piece of research because the report got funding from four funders: Novartis, Santen, Roche, and The Clothworkers’ Foundation. It's been a really in-depth piece of research. It was great to be able to get external funding to do that. 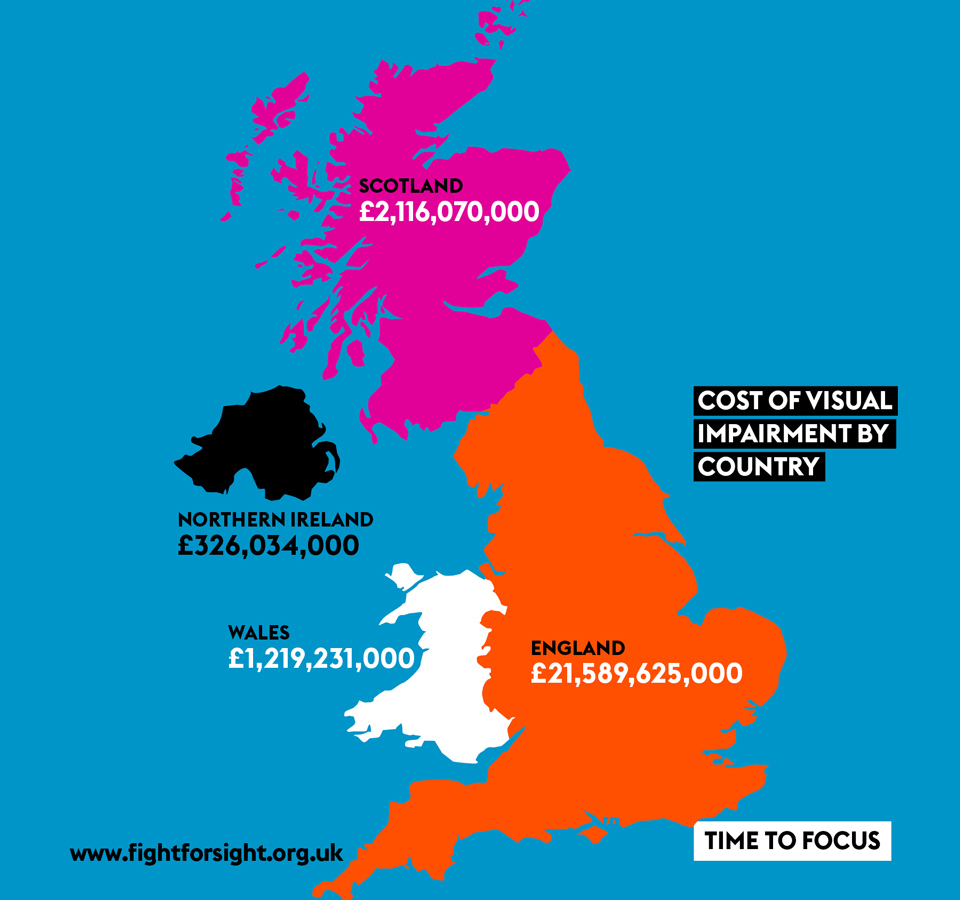 6. We put together recommendations for key stakeholders.

Firstly, the doubling of investment in eye research in the next decade. Currently only 1.5% of public research funding is invested in eye research. That's £24 million at the moment, so we're saying let's bring that up to £50 million. At the moment it's just £9.60 per person.

We know that this sort of increase is feasible when the government takes a health condition seriously. For example, between 2012 and 2015 the UK Government doubled investment into dementia medical research and in 2017/18 they invested the equivalent of £97 for every person with dementia. We're calling for that kind of step change.

I think it's such an exciting time in eye research. Our research shows that there's so much research that is already making breakthroughs or is on the verge of making new ones, whether it's in gene therapies, stem cells, or emerging technologies. We really feel that now is the time to be taking action. If we can put more investment into research, we know the science is there, the need is there and the talent is there in terms of the ophthalmologists and researchers to take research forward, so now is the time for us all to act.