Eye research charity, Fight for Sight, has announced funding for two research projects that it hopes will eventually lead to a treatment or cure for Charles Bonnet Syndrome (CBS).

The research projects, on which Fight for Sight has partnered with Blind Veterans UK, Esme's Umbrella and Health and Care Research Wales, will take place at Cardiff University and the University of Oxford.

The team of researchers at Cardiff University has developed a method to induce controlled hallucinations in the lab, which will allow them to explore the mechanisms underlying CBS.

At the University of Oxford, researchers will use MRI scans to compare the brains of people with and without CBS. They will measure the levels of chemicals in the visual areas of the brain to see whether they are abnormal in those with CBS, something which could be leading to the hallucinations.

It is hoped these studies will provide insight into the cause of the hallucinations, which could help inform larger studies in the future that have the potential to test interventions to help improve the condition.

Chief executive of Fight for Sight, Sherine Krause, said: “So much more needs to be done to understand CBS. This is an area of research that little is known about and that has largely been neglected, so we are very pleased to fund these two important research studies.

“With a better understanding of the causes, we will be one step closer to developing a treatment and eventually a cure for the condition. This is just one area where much greater investment in eye research is needed to ensure we can continue transforming the lives of people with sight loss.”

Some of those diagnosed with CBS have reported that they were never made aware that it is a common condition in people with sight loss, suggesting that more awareness is also needed. Sometimes it can also be confused with the onset of dementia. 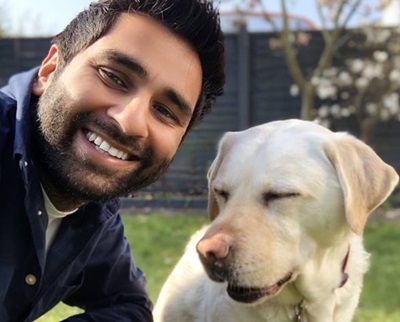 Doctor Amit Patel, who has been suffering from CBS since 2015
The COVID-19 pandemic and subsequent lockdown has exacerbated the condition in some CBS patients. Doctor Amit Patel, who lost his sight unexpectedly in 2013 and has been experiencing regular visual hallucinations ever since, has seen the number of hallucinations increase in recent months.

Discussing the original onset of his hallucinations, Doctor Patel said: “One day, not long after I lost my sight, I was walking down the stairs in my house and this girl suddenly appeared in front of me. I realised it was the girl from the horror movie ‘The Ring’. The hallucination only lasted a few seconds, but it was enough for me to fall down the stairs.

“At that point I wasn’t really comfortable talking to people about what I was going through in losing my sight and I was very much in my head and in a bad place, so I put it down to that.

“After a few weeks though this same girl kept appearing, and that’s when I knew I was having visual hallucinations and I thought that it may be CBS.”

Campaign group Esme’s Umbrella - which was set up to help support people living with CBS and works closely with Fight for Sight - say their helpline has received double the number of calls over the past five months. Sufferers have said that the stress and isolation they’ve experienced during the pandemic has turned otherwise benign images into frightening ones.

For more information on CBS, visit Fight for Sight’s website.