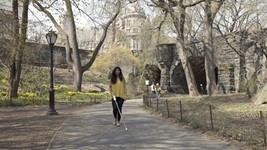 A graduate student from the University of Waterloo in Canada has developed a standardised acuity chart using Arabic text.

PhD student at the University of Waterloo’s School of Optometry and Vision Science, Dr Balsam Alabdulkader developed the chart after returning to her clinical work in Riyadh, Saudi Arabia.

As part of her Master’s project, she learned about the importance of standardised features in near acuity charts.

“I wanted to get a standardised chart in Arabic for testing my patients,” Dr Alabdulkader said.

“I then discovered that we don’t have one,” she added.

There were several challenges in developing a standardised acuity chart using Arabic text.

Arabic is cursive, meaning there is a wide variation in letter height.

Assisted by her superviser, Dr Susan Leat, Dr Alabdulkader developed a chart using a single repeated sentence, with one letter within the sentence determining the font size for each line and the spacing between lines.

The Balsam Alabdulkader-Leat (BAL) chart is available in three different versions. Each chart has 15 print size levels that are labelled in logMAR and point size.

The researchers have obtained copyright on the BAL chart and it is being commercialised through Precision Vision.

The first sales of the chart were made at the Academy of American Optometry conference in San Antonio in November last year.