The heart of sight

From start-ups to world-leading research, London is a global hub for progress in eye health. OT  talks with innovators at the forefront of a pioneering city 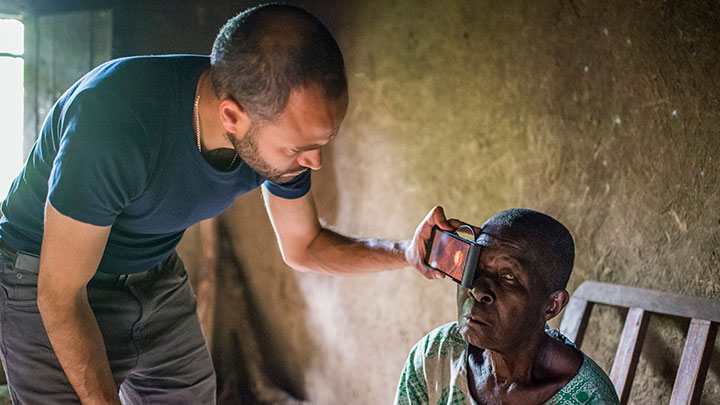 London is a city of global landmarks. Big Ben, the London Eye, Buckingham Palace, the Shard – these are all names that have been scribbled on lists at the bottom of a tourist's handbag, touchstones for a trip long ago.

When it comes to the more specialised world of eye health, the institutions in London are just as iconic internationally.

Leading universities, hospitals and technology companies combine to tackle the big issues in ocular health. The impact of eye health innovation created in the capital can be felt in far-flung corners of the globe.

The Peek school screening programme has tested the eyes of more than 100,000 children in Kenya, Botswana and India.

Peek Vision chief impact officer, Tim Carter (pictured below), told OT that London is the perfect place for the social impact enterprise to be based.

"London has from a historical perspective built up the institutions and the know-how for scientific endeavour. That combines with the fact that London is also a hub for funding and wealth. When you bring those two together it means that knowledge stays and proliferates within London," he highlighted.

Having previously worked for Google and as a relative newcomer to the world of eye health, Mr Carter told OT that becoming involved with Peek Vision was an illuminating experience.

He observed how cataract surgery not only benefited the patient but had a ripple effect on their whole family, with the individual able to contribute through daily household tasks and work again.

"The impact of eye care was previously unknown to me. It makes the work at Peek so rewarding because we are able to be a conduit for all of that benefit," Mr Carter emphasised. 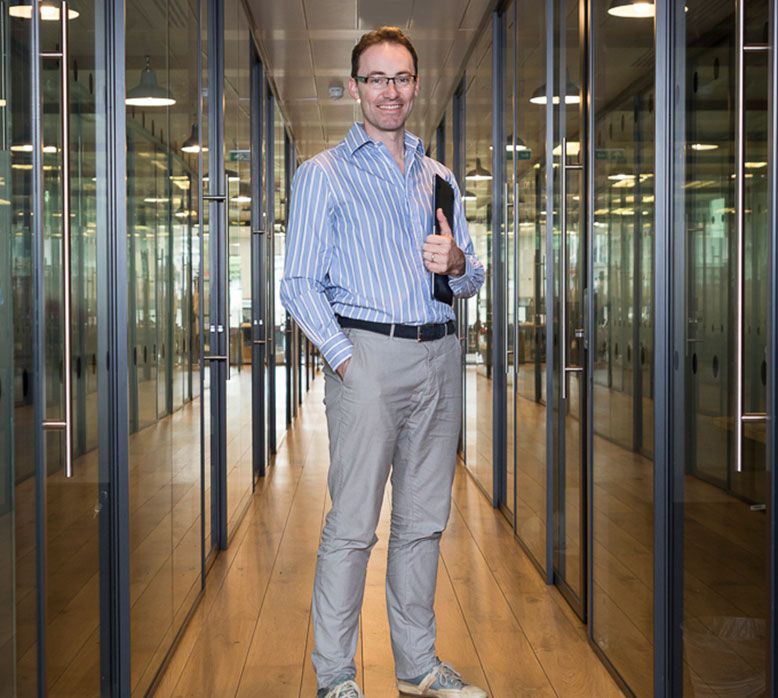 "I grew up very short-sighted and was aware at a young age when I got my first pair of glasses the dramatic effect it had on me," he explained to OT.

"I was also aware that had I been living somewhere else I might not have had the opportunity to access basic services. I had it clear in my mind that this was an injustice that I wanted to do something about," Dr Bastawrous elaborated.

He trained as a doctor before becoming an ophthalmologist and working in the NHS for close to 10 years.

A moment working at a clinic in Kenya stands out in Dr Bastawrous’ mind as a turning point in his career. He had worked from morning until night with queues of patients – the majority of whom were unnecessarily visually impaired.

"I realised that I could spend the rest of my life doing these clinics and I would still not make a difference," Dr Bastawrous explained.

"It became clear to me that I was going to have to move from being a clinician to doing something else if I really wanted to change things," he elaborated.

Dr Bastawrous completed a PhD at the London School of Hygiene and Tropical Medicine to learn more about the differences between managing the health of an individual and the health of a population.

He highlighted that there are 2.5 billion people globally who are not accessing basic eye services.

"Many of the people who go on to be visually impaired or blind don't need to be. Our role is finding those people and linking them with appropriate services," he added. 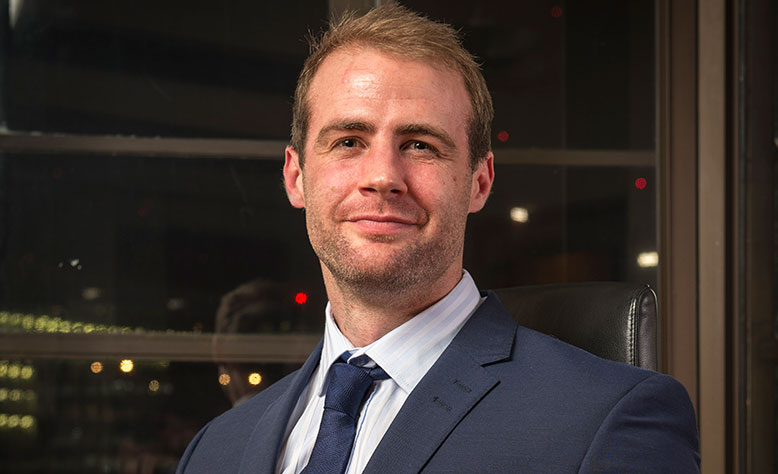 From Israel to London

Wearable assistive technology company, OrCam, established a base in London two years ago. The company, which was founded in Israel, has sold thousands of MyEye devices to visually impaired and blind people throughout the UK.

OrCam UK marketing manager, Shaun Kemp, told OT that London was remarkable in terms of the support the city provides for visually impaired and blind people.

"It is great to work collaboratively with other institutes and companies to better the service that is provided," he emphasised.

"This is where everyone is based," Mr Kemp added.

The OrCam MyEye device fits on the side of spectacles. It can be programmed to recognise faces and products, as well as monetary tender. The MyEye is capable of reading printed text from any surface, including smartphones, tablets and computers.

Mr Kemp explained that users of the technology had different levels of visual impairment.

"Our users may be completely blind or they may have a learning difficulty, as well as being varied in age. There are those who aren't visually impaired at all but find the use of document reading and identification technology useful, such as those who suffer with Dyslexia," he elaborated.

The main goal for OrCam is to provide people with independence, Mr Kemp highlighted.

"We have had people at conferences break down in tears because they have never had that independence of doing things themselves. They previously relied on others to do it for them," he shared.

"It was very transformative for me to see the enormous need, but also the impact you can have"

A hub for innovators

Optometrist Bhavin Shah (pictured above) told OT that the networking opportunities that were available in London helped him when he established his technology start-up.

Mr Shah is developing a tool to detect and monitor visual causes of reading difficulties named Okimo. He explained that start-ups converged in London.

"There's a lot of support from other people going through the same thing. It might not be eye health – it might be another health start-up," Mr Shah explained.

"You've got all of the investors and a lot of the key people and influencers here. That's one of the reasons London is a hub," he added.

Mr Shah's team have screened 400 children in Paraguay using Okimo and hope to conduct another large-scale trial of the app in the UK.

The ultimate goal of the technology is to improve the educational outcomes of children who would have otherwise struggled in their study.

"This has the power to influence a child's life forever," Mr Shah highlighted

"You can imagine the kind of impact it has on a child if you give them the tools to be able to read," he emphasised. 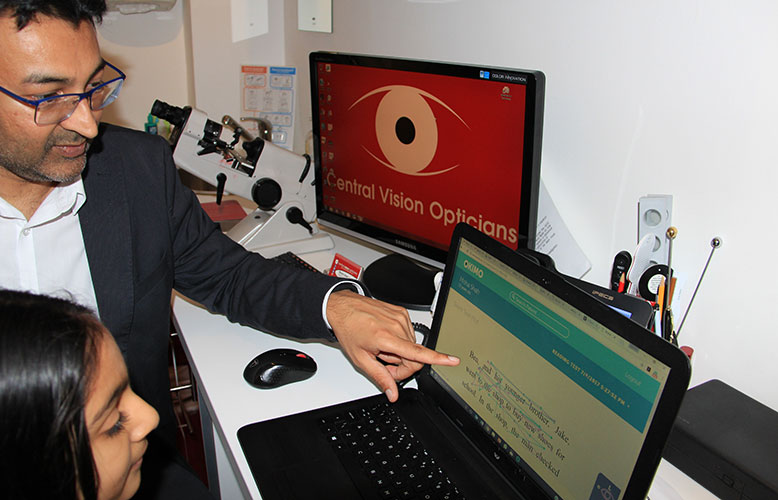 A key feature of the eye health landscape in London is the International Centre for Eye Health (ICEH). The centre, which is now based at the London School of Hygiene and Tropical Medicine (LSHTM), was established in 1980.

ICEH co-director, Professor Allen Foster, told OT that the centre was established by Professor Barry Jones who "recognised that ophthalmologists were very good at clinical ophthalmology but not so good at the public health approach – addressing the eye care needs of whole populations particularly when resources are limited," Professor Foster explained.

During the decades since it was established, those working at ICEH have produced original research with a focus on low income countries, as well as providing training to eye health practitioners. "We have trained more than 600 eye specialists from around the world in public health eye care, preparing and enabling them to go back and be leaders in their country," Professor Foster shared.

"We continue to do a lot of education programmes including the Community Eye Health Journal that is sent free of charge around the world to keep eye health workers up to date on the latest developments," he added.

DeepMind was founded in London in 2010 with the aim of using artificial intelligence technology to create a positive social impact. The company was acquired by Google in 2014.

One aspect of its operations is Deep Mind Health - an endeavour that supports the NHS by using advanced technology to help make the journey from test to treatment faster and more accurate.

More than 3000 OCT scans are completed at Moorfields Eye Hospital each week. The aim of the project is to develop a system that would give clinicians a better and faster understanding of eye disease.

The ICEH has been instrumental in developing new treatments for eye disease. Trials that led to a treatment for river blindness were conducted by the ICEH in the 1980s, and trials for an antibiotic treatment for trachoma were carried out at the LSHTM in the 1990s.

Professor Foster shared that his time working in Africa provided a strong motivating force for his work in public health.

"It was very transformative for me to see the enormous need, but also the impact one can have," he explained.

"As I approach the end of my career now I enjoy seeing the enthusiasm and expertise of the next generation coming through. There is much more being done now than when I was in my 30s," he elaborated.

Professor Foster recalled that when he was younger the number of blind people globally was increasing by one million per year – from 28 million in 1978 to 45 million in 1995.

However, over the past two decades there has been the opposite trend with the figure reducing from 45 million in 1995 to 32 million in 2010.

"It is very encouraging and at the same time humbling. You realise how many people around the world are involved all doing their bit to reduce avoidable blindness and improve eye care," he concluded.

The ICEH is training cataract surgeons in Cape Town, South Africa using a simulator. After an initial pilot the project has moved on to a randomised trial that compares traditional cataract training – an apprenticeship with a consultant – with a training programme involving a simulator. Surgeons practise on artificial eyes.

The prevalence of open-angle glaucoma is higher in many African nations than other countries, including the UK, with limited access to eye drops or treatment facilities. The ICEH is exploring the possibility of performing one-time laser surgery rather than ongoing eye drop treatments in Africa.

The ICEH is working in partnership with patient groups in Kenya to encourage people to go for regular eye examinations. The Centre also has a diabetic retinopathy network that is working to improve access to diabetes treatment in 15 countries, as well as working with the Ministry of Health in India.

ICEH Professor Clare Gilbert is working in Latin America, Eastern Europe and India to prevent retinopathy of prematurity by improving the availability of neonatal care, as well as screening and treatment services.