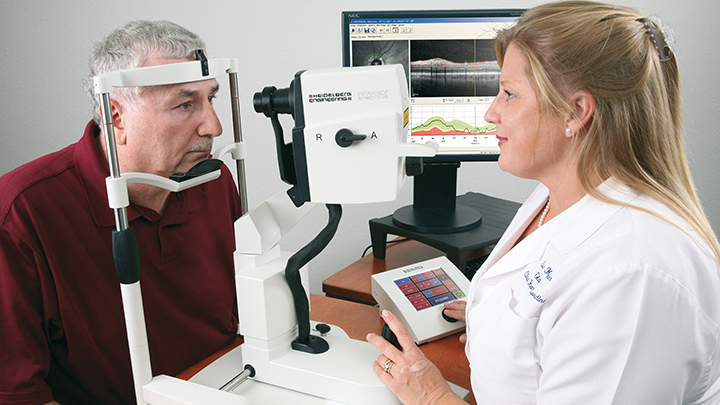 OCT testing of retinal thickness by an optometrist should be part of the yearly optical monitoring of multiple sclerosis (MS) patients, new research suggests.

The thinning of the peripapillary retinal nerve fibre layer (pRNFL) can predict the progression of the degenerative disease, a new Lancet Neurology paper concludes.

The cohort study was conducted in Canada, the Czech Republic, France, Germany, Italy, the Netherlands, Spain and the US. A total of 879 patients, who had several types of MS but not optic neuritis, were recruited then tracked for an average of two years.

The symptoms of 252 patients had worsened during the study, and patients with thinner pRNFL were more likely to see their disease progress, research co-author, Dr Pablo Villoslada, told OT.

The study also tracked macular volume, but found no associations between this and disease development.

The 43-person research team concluded that monitoring pRNFL thickness using OCT was a useful predictor that a patient’s disease would worsen.

His hospital’s neurology department has its own optometrist to conduct such monitoring, he explained. “They work in the neurology outpatient clinic. An ophthalmologist reviews the OCT test from the first visit for incidental findings. This works easily and everybody is happy with the solution,” he noted.

Previous research has shown thinning retinas are associated with multiple sclerosis and other neurological degenerative conditions, such as Alzheimer’s and Parkinson’s diseases.

Dr Villoslada’s team is currently assessing whether OCT monitoring of pRNFL could predict the progression of such conditions as well as MS.