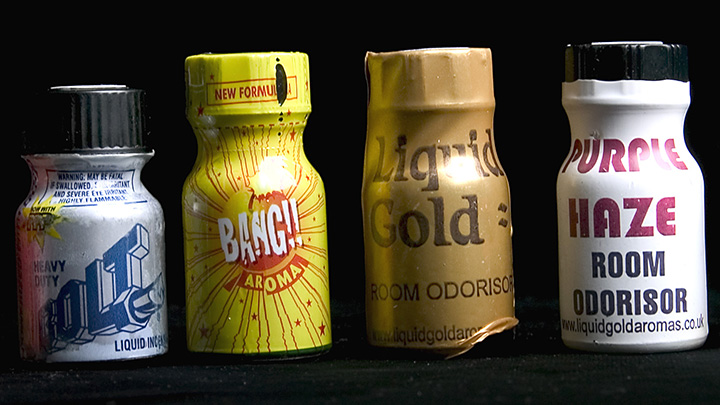 The legal high will soon be banned in the UK when the Psychoactive Substances Act is signed into law, which is expected in April. However, Minister for Policing, Crime and Criminal Justice, Mike Penning, said the Advisory Council for the Misuse of Drugs is reviewing the drug, popular with rave-goers and gay men, for its possible inclusion on the legislation’s exempted substances list.

The BMJ paper said a 52-year-old man first noticed central visual blurring and metamorphosia after inhaling alkyl nitrates, commonly known as poppers, for the first time when clubbing. The otherwise healthy man presented at an ophthalmology clinic after 10 days of first noticing these symptoms.

He noted that in the previously reported cases of visual damage by poppers, several had indicated the damage to the retina goes beyond the macula.

He explained: “The cells basically die. There’s no way of replacing them.”

But Dr Luis said he thinks there are far more people whose vision has been affected by popper use than the numbers reported in official case studies.

He emphasised: “If you ask a lot of people if they would have taken them if this was a possible side effect, they say no. If they had known they might have changed their mind … People should be more aware of what [this drug] does.”

It is suspected the free radicals released by the alkyl nitrates are the cause of the damage, which ceases to progress when the patients stop using the legal high.

There appears to be no relationship between higher consumption of poppers and a higher likelihood of eye issues, with Dr Luis’ paper demonstrating that infrequent and even first-time users are also susceptible to retinal damage.

AOP professional adviser, Geoff Roberson, said the Association recommends that people with concerns about their vision after taking poppers should visit their local optometrists.

“There is increasing evidence [alkyl nitrates] are harmful to the eyes,” he concluded.

The study can be found here.