A lack of optometrists in the north-east, south-east and east Anglia has been highlighted in the College of Optometrists’ Optical Workforce Survey, released on 12 February.

The data, focused on optometrists and dispensing opticians, show the per-capita distribution of optometrists highest in Scotland, Northern Ireland and Greater London.

“People seem to want to study where they live … and work near where they studied. It’s a generational thing,” he told OT.

Mr Bowen said the areas with the lowest frequency of optometrists often have older populations and therefore higher demands for eye health services.

“We need to ask: ‘Are there areas that are under served?’”

Mr Bowen added the south-east did have a high concentration of dispensing opticians. He said this is likely in response to low optometrist numbers: “There’s less of an issue of mobility with dispensing opticians who are ‘home grown’ and already live where they work.”

Separate estimates also indicate the UK has a higher need for optometrists than currently working.

The report calculates 12,912 full-time equivalent (FTE) optometrists were needed to serve the population, based on elderly patients requiring an annual sight test, adults an exam every two years and children an exam every four years. However, the survey reports the country currently has 12,099 FTE optometrists. 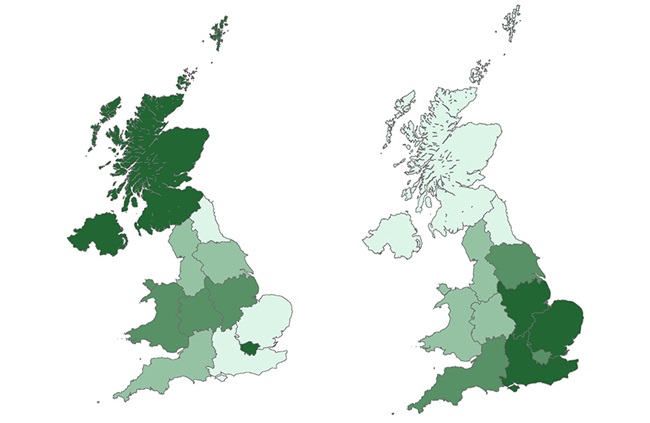 Mr Bowen said with the ageing population and growing eye health issues, it is important to know what the level of demand will be for optical professionals. “It’s probably a lot more complicated than that … and we need further analysis.”

Concerns over high numbers of university courses causing an oversupply of optometrists led to a 2014 petition to cap the number of tertiary courses. The petition stressed that high supply might impact negatively on salaries.

The recent survey found the percentage of optometrist respondents earning more than £40,000 had fallen since 2010, from 52% to 43%.

Mr Bowen said it was difficult to know if one factor such as higher numbers of registered optometrists has contributed to lower salaries.

Another key survey result is that just two in five respondents said they have had a clinical appraisal in the last year. Mr Bowen commented it was “common sense” from an employer’s perspective to have all staff clinically appraised regularly.

The survey also captures the recent rise in locum working. More than one in six optometrists now work as a locum, compared to one in 10 in 2010.

Despite the industry upheavals, four out of five optometrists and dispensing opticians report themselves to be satisfied to extremely satisfied with their job, the report also noted.