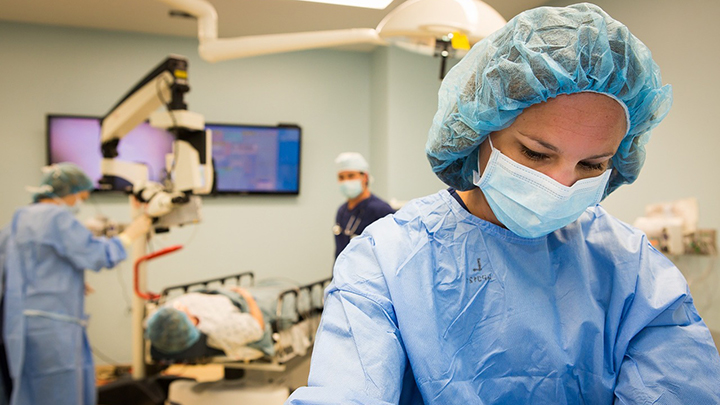 A closer working relationship between ophthalmologists and optometrists may help to ease the burden on hospital eye services.

A report commissioned by The Royal College of Ophthalmologists, The Way Forward, provides an overview of the way that ophthalmology departments in the UK are working to meet growing demand.
One theme in the report is that a multi-disciplinary team, including optometrists, ophthalmic nurses, orthoptists and technicians, can be influential in providing more capacity.
Professor Carrie MacEwen, president of The Royal College of Ophthalmologists, told OT that working relationships between all those involved with managing eye patients’ care is hugely important.
“The Way Forward report has identified that there are a number of roles in many areas of ophthalmic practice for non-medical eye healthcare professionals,” she explained.
In the report, Professor MacEwen highlighted that more ophthalmologists were needed.
“Some eye departments may still be meeting demand with traditional models of service delivery, but increasingly, the challenge that the growing patient population presents may lead to decompensation of those services as capacity becomes insufficient,” she continued.
The report found a common theme across new models was the development of a multi-disciplinary eye healthcare team.
“Used well, this team can ensure consultant time is optimised, freeing up more time to perform surgery, deal with more complex patients and concentrate on decision-making commensurate with their training and experience,” the document stated.
AOP chairman, Kevin Thompson, highlighted to OT that the AOP supported a multi-disciplinary approach to meeting the increasing demand on eye care services.
“The AOP has long argued that optometrists are underutilised in this way – with many optometrists across the community and in hospitals ready to take on an expanded role,” he emphasised.
The Way Forward revealed that cataract surgery represented 6% of all surgery carried out in the UK, and was expected to grow by 25% over the next decade.
The proportion of the population with diabetic retinopathy was projected to increase between 20% and 80% over the next two decades.

A constant increase in acute eye care attendances was also highlighted in the report.

It indicated that most units were reviewing patients in-house using nurses, orthoptists or optometrists and some were discharging uncomplicated post-op cataracts patients to community optometrists who had been appropriately trained and could return feedback for audit.
The report noted that tens of thousands of patients were discharged annually in this way, without major systematic problems.

It was important that there was a direct line of communication with the hospital eye service if the patient or optometrist needed to raise problems, the document emphasised.

Recommendations for glaucoma treatment included considering setting up a virtual review service for images within the hospital eye service, and establishing repeat field or repeat pressure schemes in collaboration with local optometrists if none were in place.

The Way Forward explained that advances in imaging technology had changed the way the age-related macular degeneration (AMD) services were provided.
Two thirds of departments interviewed had non-ophthalmologists making clinical decisions in their AMD pathways, with the majority of those decisions made by hospital optometrists, but also by nurses and orthoptists.

In a section on emergency eye care, the report suggested evaluating whether referring GPs and optometrists could discuss cases with ophthalmologists and avert some referrals. One suggestion was establishing a referral support line so that those referring from primary care could access advice. The main point of reviewing emergency eye care was to ensure that patients were seen by a consultant to ensure that they were appropriately treated and discharged.