Responding to rapid change: a period of transformation for PES

Primary Eyecare Services spoke to OT  about the developments seen over the last few years, including structural changes, tech and software implementation, and extended services

Primary Eyecare Services (PES) has seen a period of “rapid and intense change” in recent years, according to the provider’s chief executive officer, Dharmesh Patel.

This might come as little surprise, with two years of a global pandemic affecting all companies in a variety of ways, but change was in progress even before the events of 2020.

Speaking to OT about the journey of the eye care provider, which contracts with NHS clinical commissioning groups (CCGs) and trusts for funded services in optometry practices, Patel explained that in 2017 conversations turned to long-term sustainability, and ensuring the organisations had all they needed to provide more shared learning and deliver greater consistency.

“A piece of development around a change in the way the NHS was doing procurement in 2019 led to substantial parts of the Midlands joining as well,” Patel continued. “We had a domino effect over a two-year period,” he said, amalgamating 20 Primary Eyecare Companies.

“That’s where Primary Eyecare Services was born,” Patel explained. “We’d gone through a rapid expansion over those two years, to the point where we were covering large parts of the country and were able to start to get some consistency and build on the great work of the local primary care companies, the LOCs and LOCSU.”

It was a Herculean operational effort from everybody, with the support of LOCs and LOCSU along the way

In late 2019, the organisation set up a head office in Manchester, acting as base and facilitating the establishment of a referral hub.

In this period, Patel said, “We were going through a substantive development and amalgamation. But the core function and structure of commissioning for the NHS, subcontracting and delivering maximum care through practices and maximising the fees for practices, remained the principal purpose.” 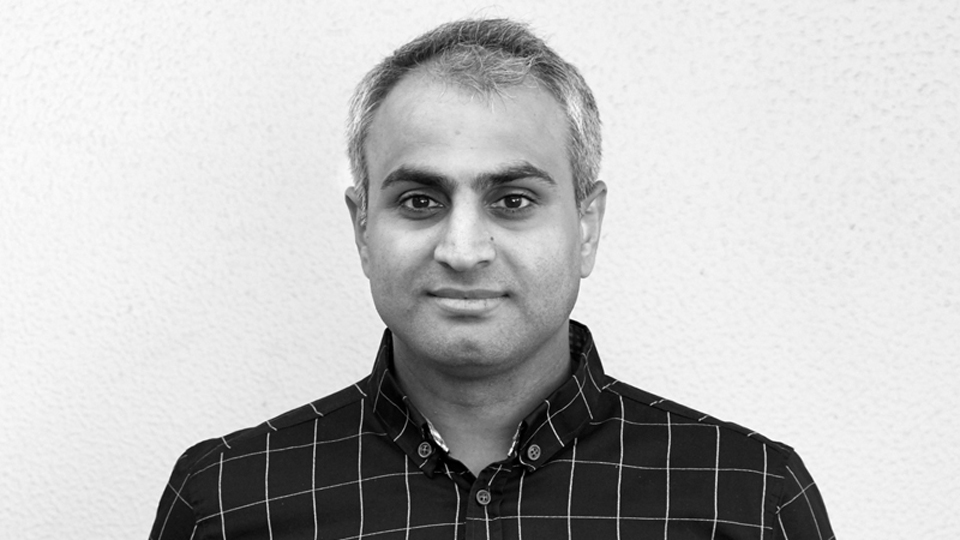 Like many practices, PES remained fully operational throughout the pandemic, and the roll-out of the COVID-19 Urgent Eyecare Service (CUES) saw PES adapt to support practices and the NHS through the pandemic.

This represented a significant implementation project for PES. Patel explained: “We had to roll that out at pace across the country. Where, previously, we would have been mobilising services by a handful each month, we were implementing 10 to 20 services a month in the early parts of COVID-19.”

In some areas, this meant changing from existing models, like the Minor Eye Condition Services (MECS), while other areas of the country required the implementation of an entirely new system.

“It was a Herculean operational effort from everybody, with the support of LOCs and LOCSU along the way,” Patel said.

During the pandemic, PES launched the Find a Practice tool, a webpage that directed patients to CUES and MECS services in areas of the country covered by PES.

As the application was well received, PES are developing a next iteration of the platform with the aim of helping patients find the services they need.

The team had been considering new IT solutions before the pandemic, but the arrival of COVID-19, and the CUES model, meant the need for a new system took on a greater urgency.

“We had to very quickly test a new solution, because our existing IT supplier couldn’t provide the image sharing capability that we were going to need and our provider was leaving the sector,” Patel said. “Some people might ask why we chose to change IT systems in the middle of COVID-19, but the circumstances meant we had to.”

PES began testing the Opera platform, by IT provider Referral Management Services (previously known as FDS Consultants), in all the areas that moved to CUES, finally confirming a new long-term partnership with the provider in August 2020.

“We selected the supplier of Opera largely following the success of the CUES roll-out, but actually the biggest thing about the platform was its ability to move at a faster pace and integrate with other systems,” Patel told OT. “The sector talks a lot about connectivity, so it was really critical for us to provide that.”

“It was a substantive IT project for the sector,” Patel said. “There have been some bumps along the way and it was a difficult journey – IT changes are always difficult.”

Challenges included an interruption to financial processes in 2021, due in part to moving finance systems and changes in the NHS. Patel acknowledged: “This did cause disruption, both for PES and for practices, and that was difficult for everybody. The practices were very patient, and having recovered from that, we’re in a much better place and more timely payments are flowing to practices again.”

The next step for the platform is continuous development, Patel said, “to make it easier for practices to use, and hopefully delivering for more commissioned services.”

Describing the functions of the platform, Patel explained that Opera supports practices to share images in a substantive way, adding, “It’s connected the sector in a way that hasn’t been possible before.”

“What a lot of people don’t realise is that it also enables us to make referrals through the NHS eRS which made a very big difference in terms of the way we work and communicate with hospitals,” he said.

PES and the Opera platform were selected as one of a number of suppliers for the electronic eyecare referral system (EeRS) and the Opera EeRS has already launched in several areas.

“We’re live currently in mid and south Essex, and in the first phase of implementation in the North West, and we’re spreading further,” Patel said.

We’re really proud we have reached this stage, with our LOC stakeholders and the support of LOCSU

Preparing for the future

Late last year, PES saw an internal restructure, Patel explained: “That’s put us in a much better position to be able to meet the ever-increasing needs of the NHS, and to support our practices as the largest lead provider of commissioned extended services in the country.”

The organisation has recently appointed a new chair of the board, Rt Hon Dame Janet Paraskeva, DBE. The former chief executive of the law society and first civil service commissioner replaced Mike Fegan who has retired.

PES is currently contracted to deliver services in 29 of the 42 Integrated Care Systems (ICS) planned under the NHS reforms. PES is also delivering more than 380,000 episodes of care a year, Patel said, with the vast majority provided through practices and commissioned via PES.

“That’s a fantastic achievement for the sector, our practices, and for us, to be able to provide that support. We’re really proud we have reached this stage, with our LOC stakeholders and the support of LOCSU,” Patel added.

Looking ahead, the provider is considering what the future for commissioning could look like, as the Government discusses plans for NHS reform. Top of the agenda is the transition to ICS and Integrated Care Boards (ICBs).

“In some places that will have less of an impact, because the geography of the CCG is synonymous with the ICB, and in other places it will have a more considerable impact where the geographies are not synonymous,” Patel explained.

“We see the development of ICBs as a real positive,” Patel anticipated, but added, “we want to see that scaling of commissioning up to the ICB level of consistency.”

delivers over 380,000 episodes of care a year, with the majority provided through practices

Patel noted that concerns remain around ‘place-based’ commissioning – based on the geographies of the existing CCGs – adding: “We’re still looking for clarity from systems around the country as to what their plans are.”

Earlier this year, plans for the reforms were delayed, with a new target date for the commissioning systems to take effect from 1 July.

This delay could enable commissioners time to clarify some of the areas where questions and concerns remain.

“We’re really busy mapping what this will look like across the country and what impact the changes will have,” Patel said, adding that the organisation is working closely with LOC partners in the areas where it is likely to have an impact.

There is an operational side to the reforms, however. Patel said, “We need to make sure that our services continue to run uninterrupted through that process.”

While strategic and operational changes are underway for the NHS, hospitals are meanwhile facing significant demand and waiting lists, exacerbated by the pandemic.

Earlier this year, PES was selected as the lead provider for the first three areas to be selected as early adopters of the Optometry First model, supported by the National Eye Care Recovery and Transformation Programme.

Patel commented that this represents an opportunity to test the model, which looks to maximise care outside of hospital settings, at scale.

“That’s an interesting development and will become a big part of our focus in the coming year,” Patel explained. “While there is a focus on Optometry First as an early-adopter concept, the ongoing established models continue to be extended further too.”

PES will be focused on “continuing to maximise our existing services, to make sure we’re seeing as many of the patients as we can within our contracts, so we’re helping with those backlogs.”

“At the same time we’ll be looking to commission additional services in areas with commissioners and acute trust hospitals, to deliver more where we can in areas where it will help,” Patel explained.

For practices, Patel said PES hopes to continue adding to its support mechanisms, making processes as easy as possible within the constraints of the governance requirements of the contracts.

Care in the community

“There is a need to ensure that we are maximising the use of our extended services. Developing those roles that can support the ophthalmology departments in the NHS systems is a really big priority,” Patel said. “We’re here to support the NHS and practices ultimately, and to facilitate that commissioning model using our optical practices.”

Going forwards, the priority will be on the next development of these services. Patel said: “We’ve always had two categories of services, first contact care, which is about reducing referrals going into hospitals, and those low-risk patients who could come out of hospitals and be monitored or managed in primary care.”

“That focus remains unchanged, except the demand, scale and speed at which we need to do that has become more acute.”

There will be a particular focus on glaucoma services, Patel predicted, because it makes up such a large proportion of the NHS ophthalmology backlog. PES will be working to augment its existing models of care around glaucoma as a result.

Patel told OT: “We have been asked as a provider company to support triage models of care, which is great because the whole purpose of triage is to make sure we direct more patients into our extended services, rather than into hospital – where that is the clinically appropriate thing to do.”

“It’s a challenging time for practices, both in terms of capacity and the environment they are working in, whether that’s workforce challenges in some parts of the country, or other issues,” Patel concluded.

“We’re trying our best to make sure we support them to be able to participate and deliver services,” Patel shared, expressing his appreciation for the hard work of optometry practices.