“The medical conscience” of Moorfields Eye Hospital’s board

OT  speaks to the clinical director at Moorfields Eye Hospital, Nick Strouthidis, about his role and the part that optometrists play at the hospital in tackling current challenges

What was your role at Moorfields Eye Hospital before being appointed as clinical director?

I first came to Moorfields in 2002 as a research fellow in the glaucoma unit, which I did for two years and then I got on the registrar training programme. I went away to the US at the end of my registrar training for 16 months before coming back as a clinical glaucoma fellow. That took me up to the time that I was appointed as a consultant in the glaucoma unit. Prior to taking up the role of medical director, I was director of the glaucoma service for about three years.

What are your responsibilities as medical director?

It is a big portfolio, but I am the medic who sits on the executive board of the hospital – the medical conscience of the trust’s board. I look after the clinical conduct of the doctors that are here in terms of quality and safety of care that they provide. In that role I have an additional title of responsible officer, so I recommend if the doctors are fit to continue to practise, according to the General Medical Council’s guidelines. I am a conduit between the board and the doctors, and in reverse, in terms of how we deliver the strategy for the organisation. I started in August, on my birthday.

What are the current challenges in ophthalmology?

I think it’s important for us to recognise that ophthalmology in the hospital setting has got a lot of challenges. We are facing problems with capacity and that’s largely driven by the fact that we have an ageing population. If you look at the main disease entities that we see, which is cataract, macular degeneration and glaucoma – all three are disease of ageing. As the ageing population increases, the number of patients requiring treatment for those conditions goes up. We’re already very busy and that’s not unique to us at Moorfields – it’s the same across the board for all ophthalmology clinics around the country.

There’s limited capacity to see the patients that need care now and that stress will increase as time goes on. We need to be more agile in how we deal with this capacity issue and that means coming up with new ways to see patients, having patients being seen in the community, having patients seen in partnership with our community optometry colleagues and it’s about integrating technology, such as Moorfields’ DeepMind. That type of development will help in terms of referral refinement and decisions to bring people into hospital.

In the coming years, there will be a lot of emphasis for me on the clinical side of things to make sure that we can introduce these new pathways and technologies but always with a view to making sure that we provide the highest possible level of care for our patients. 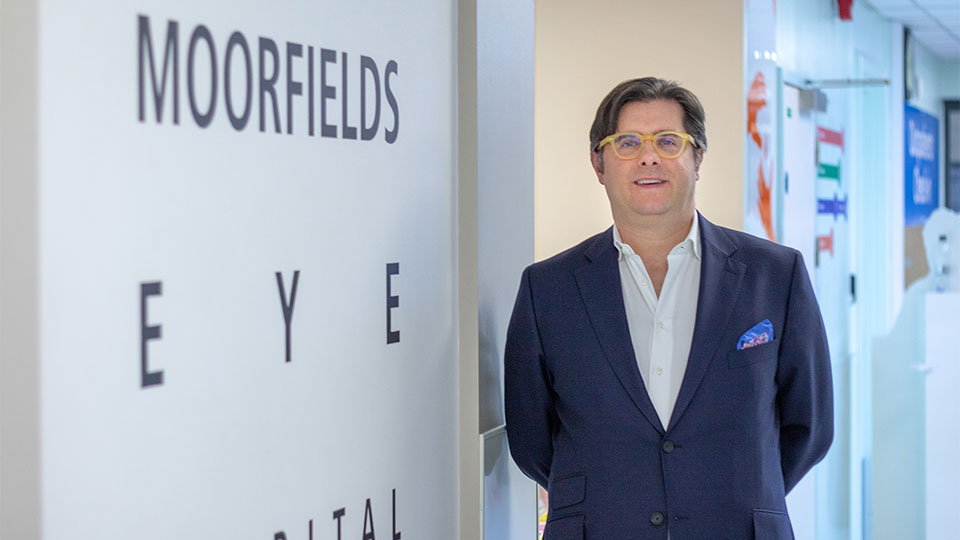 How can optometrists play a role in addressing these challenges?

Optometrists already play a very significant role at Moorfields in providing optometry-led services within the hospital. We’ve invested enormously into an annex at the hospital, which we call Cayton Street, which is partially a setting for glaucoma clinic but there is also an optometry-led service. In the morning, booked urgent appointments from eye casualty are seen and managed by optometrists – these are independent prescribing optometrists. In the afternoon, it’s an optometry-led glaucoma clinic where follow up patients who are at a higher risk level are seen by optometrists. We’re already using our optometry workforce in a novel way to deal with capacity issues.

Moving forwards, there will be some patients that can be managed in the community setting once they’ve been diagnosed and treatment has been initiated. One of the things we’re looking to exploit is teleophthalmology to help facilitate this. In practice, the optical coherence tomography images for patients that might have wet-age related macular degeneration automatically come up to the hospital and advice will be fed back to the optometrist. The future is very much about partnering with our colleagues in the community setting as well as using optometrists in the hospital setting.

Where Moorfields will have the greatest impact in terms of optometry management of medical conditions will be in education, particularly sub-speciality skills. We already have various courses for glaucoma management and we will be developing these in other sub-specialities such as cornea and retina. I think Moorfields will be at the spearhead of giving people validated training that they can confidently use in either a hospital environment or in a community setting.