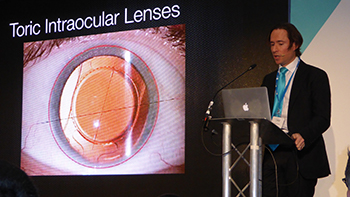 Thirty million refractive surgery treatments have been carried out worldwide, with over 50,000 in the UK alone, delegates heard at 100% Optical (4–6 February, ExCeL London).

The figures were revealed by consultant ophthalmic surgeon Allon Barsam (pictured), to address the “scepticism” in the profession, he explained during his presentation, Refractive surgery in 2017: The state of the art.

Mr Barsam, who specialises in cornea, cataract and laser eye surgery, as well as lens implant surgery, sends his patients back to their optometrist following their surgery and treatment, he revealed.

Looking at the history of refractive surgery, he told delegates that the biggest breakthrough was excimer lasers. “They can sculpt a human hair and use minimal heat so are often called ‘cold’ lasers,” he highlighted.

“LASIK is the most common surgery in the world today,” said Mr Barsam, explaining that it was because the shape of the cornea was preserved.

Turning to femtosecond lasers, he showed a film of him performing surgery, highlighting that it was “not painful, not unpleasant” for the patient. Mr Barsam added: “The visual recovery is astounding. I have seen patient back at work the next day.”

Tackling the issue of a lack of evidence on outcomes of laser eye surgery often cited in the optometric profession, he emphasised that over 6,000 studies have been done.

The PROWL study done by the FDA looked at 990 military and civilian patients and reported very high satisfaction rates, with a reduction in dry eye and only one lost best spectacles-corrected visual acuity (BSCVA), delegates heard at the London trade show.

Looking at possible complications after surgery, Mr Barsam said that dry eye, glare and halos were rare three weeks after the operation. Infection or inflammation were less likely than contact lens complications, he highlighted. Corneal ectasia, which could develop after refractive surgery, was the most feared complication by surgeons he revealed.

Key to successful outcomes is selecting the right patients, Mr Barsam highlighted, revealing that he excludes one in six people interested in the treatment if they are ‘not fully invested.’

Mr Barsam said that the optometrist’s role in refractive surgery was to identify patients with the right motivation. He highlighted to delegates that an appropriate referral from an optometrist could lead the patient to tell their children, and possibly their grandchildren, to go to that optometrist.

He urged optometrists to avoid patients with unrealistic or unreasonable expectations of refractive eye surgery, such as those who thought they would never need spectacles again after the operation. Those patients with suspected kerataconus should also be avoided, he told delegates.

Mr Barsam explained that he excluded patients going through life-changing events, such as a divorce and would urge them to wait until their life settled down again, even years later, before continuing. “Always review the patient’s needs,” he concluded.