The AOP has launched its annual Don’t swerve a sight test campaign to remind motorists of the importance of regular sight tests for safe driving, particularly in winter months.

The launch of the campaign follows research by the AOP which revealed that 85% of optometrists report that they continue to see patients whose vision falls below the legal standard.

Over half of the 1127 practising optometrists surveyed reported that they have seen more patients driving without an up-to-date prescription after delaying their sight test during the pandemic. Almost 60% said they had recently seen patients who are unable to meet the required driving standard using glasses or contact lenses, but continue to drive.

Approximately half of those surveyed felt that the public are unaware of the dangers of driving with poor vision.

Head of clinical and regulatory at the AOP, Henry Leonard, highlighted the importance of good vision when driving, not just to see ahead, but to be able to read road signs and see what is happening in the peripheral vision – as well as having an impact on reaction times.

Through the campaign, the AOP is urging motorists to give themselves “the best possible chance” of avoiding dangers and keeping safe on the road and has issued a series of winter driving tips. 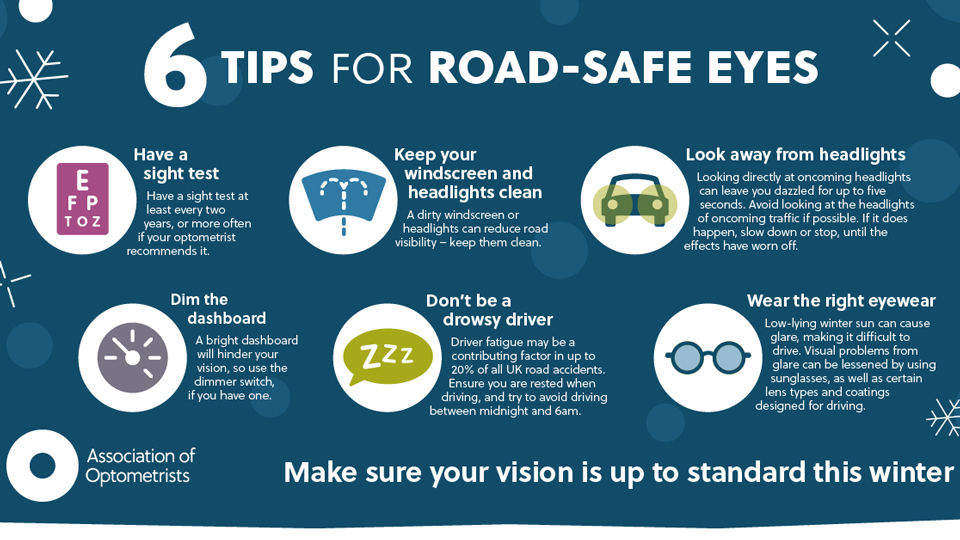 The AOP has produced a graphic sharing tips for vision and winter driving
A range of campaign resources, including social media graphics, are available for optometrists to download and share.

The Don’t swerve a sight test campaign first launched in 2017 and encourages drivers to have regular sight tests.