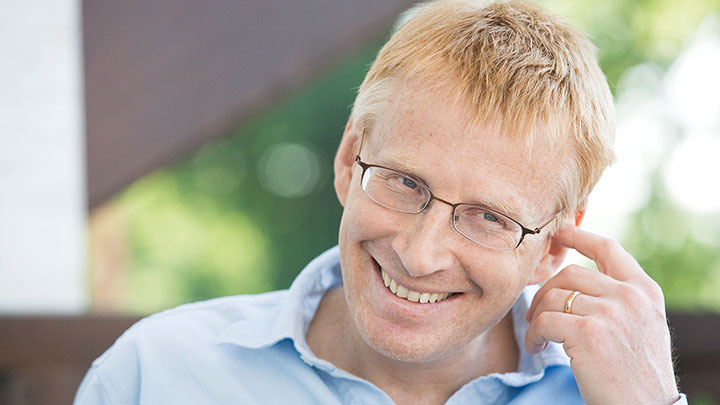 I started working as a doctor, a comedian and a journalist very early on in my career. I wouldn’t say the career path was particularly planned. It started off as therapy.

I began my career back in the day when junior doctors worked 120 hours a week some weeks. The journalistic side of me kicked in and I thought I would start raising concerns about this.

I formed a double act with another junior doctor, Tony Gardner, which we called Struck Off and Die. We first went to the Edinburgh Fringe in 1990 to blow the whistle on junior doctors’ working conditions. It was really black and bleak. I thought we would be crucified but people loved it.

I like jokes that surprise you. Sometimes you can spot a punchline coming over the hill, but I like ones that catch you off guard. A friend of mine used to say that the best jokes are like the knight’s move in chess – they hit you from the side.

I think comedy can be an agent for social change. It is a very clever way of crystallising an argument. But the problem with comedy is that it doesn’t always offer solutions. Once comedians start getting preachy, they cease to be funny. There is a danger sometimes that if you laugh at something, it releases pressure, which is good but also it can stop you from acting on it. If you really want comedy to change things, you can laugh but you also have to follow up.

"I think comedy can be an agent for social change. It is a very clever way of crystallising an argument. But the problem with comedy is that it doesn't always offer solutions"

I think when you get voted for by your peers, patients or people you admire then that is special. When I was a lecturer in communication skills for student doctors at Birmingham University, the students voted me Teacher of the Year. I had never experienced anything like that before. Because it was from the students it really felt special.

Optometrists do a fantastic job. I have been heavily myopic and astigmatic from a very young age and have had a series of wonderful optometrists over the years. Without my optometrist, I wouldn’t be able to function.

For me satisfaction is about feeling part of something bigger – that your job is worthwhile and that you are valued. Compassion and a life-long love of learning are also key.

I think my approach to career satisfaction has changed over time. When you are younger you are desperate to achieve, to be noticed and possibly you are more interested in money. As a journalist at the beginning of my career I was exposing scandals in the NHS, but in quite a brutal, black-and-white way. I have learned as I have got older and kinder that actually the best way to achieve change when things aren’t going well is to do it fairly and constructively rather than harshly and angrily. I have become much less angry and I am less interested in being noticed.

The AOP Awards 2018 will be held at ExCeL, London on Sunday, January 28. To vote, visit the AOP webite.