Optometrist and newly-elected AOP chairman, Mike George, shares his journey into optics and what led him to the AOP

My first encounter of optics was when I had my first sight test with Helen Cope in Cardiff at the age of 11.

My brother’s teacher had asked our mum to take him for a sight test because he wasn’t concentrating in class. I didn’t have any problems, but she took both of us for a check and it turned out that I needed glasses and he didn’t.

During my first visit to the optometrists, and those thereafter, I became fascinated by the experience of having my eyes tested – as a kid, you don’t get to see those types of tools being used anywhere else.

Plus, when it came to deciding on a career, the educational requirements for an optometry degree suited the subjects that I was keen on at school.

When I was five years old I wanted to be a lollypop man helping children to cross the road; I suppose that career option may still be open to me when I retire from optometry.

After I graduated I completed my pre-reg placement at Wangler Opticians – an independent group in Gwent.

I learnt a lot from their team of optometrists and can still remember the clinical pearls of wisdom that I gleaned from each of them. I went on to spend the next six years working full-time at Cole Opticians in Newport alongside great optometrists who helped me develop professionally.

With a desire to open my own practice, I went into business with a friend and colleague, Steve Elworthy.

We opened a part-time independent practice in Blackwood, which we ran for around seven years. However, it turned out that it was financially more viable for us to rent out the building and pursue other professional interests, so we wound it up in 2011.

Since 2011, I have worked part-time at Monnow Eye Care, a dynamic independent practice in Monmouth which has a great team of dedicated optometrists that includes a GOC councillor, a College of Optometrists councillor and a former chief optometry adviser to Welsh Government.

In 2001 I did some volunteer vision screening at the Special Olympics in Cardiff.

I spent time with Dr Maggie Woodhouse, who had been one of my lecturers at university. She suggested that I return to the School of Optometry in Cardiff to supervise some third year clinics. What started out as two hours a week has become three days a week during term-time, and I now teach both second and third year students on the undergraduate course. I also work for WOPEC, the optometry post-graduate education centre, on an ad hoc basis.

In 2005 I started working one day per week for the Health Board as an optometry adviser.

We have pioneered developments including the first optometry cataract post-operative assessment service in Wales and optometry-based Optometric Diagnostic and Treatment Centres for glaucoma and wet age-related macular degeneration (AMD).

I don’t have a typical working day. I can be at the university, the health board or in practice.

I could be teaching students how to refract a person with learning disabilities, meeting local health managers to discuss moving hospital eye services to primary care optometry, removing a corneal foreign body under the Wales Eye Care Service or checking people’s eye health and making sure they have an optimal optical prescription. 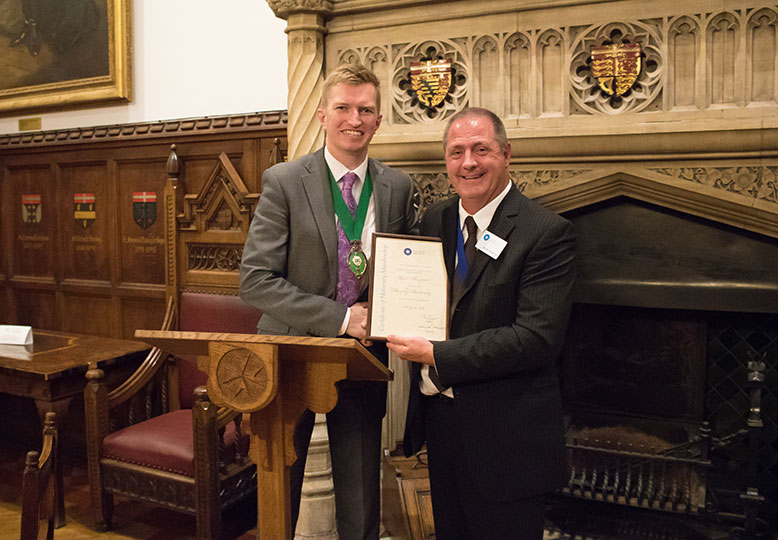 In terms of setbacks over the years, the reality of owning an independent practice through the 2007–08 financial crisis was certainly one of them.

The realisation that sometimes, no matter how hard you work, how much money you spend on marketing, how professionally skilled you are or how well you treat your patients, a practice can fail.

The most rewarding aspect of being an optometrist is the satisfaction that I get when I help someone.

Whether that’s fitting a patient with contact lenses for the first time, helping a student optometrist perform a clinical technique better or simply explaining a patient’s eye condition in a way that they understand.

I first became aware of AOP at university but, like many students, I was overwhelmed by the alphabet soup of optical body acronyms and didn’t really know what the AOP did.

In 1999 two colleagues and I attended an AGM of the then Gwent Local Optical Committee (LOC). It was our first time at an LOC meeting and jaws dropped that three young optometrists had attended voluntarily. The welcome was warm, there was a good sense of fraternity and fellow-professionals looking out for each other. As I became more politically aware in optometry, I gravitated towards the AOP. My motivation has always been for optometrists to look after each other – our own interests and our profession – because I am sure that no one else will.

I first became a Councillor of the AOP in 2003, representing Wales.

By 2007 I was on the Board of Directors and now I am chairman, having officially been inducted at the Association’s AGM in June.

Being on the AOP Council gives me a great sense of satisfaction. I feel that I am putting something back into the profession by supporting fellow optometrists and protecting them from legislative and regulatory burdens that may restrict their independence.

There is also satisfaction in being part of the team that provides the premier legal support package for UK optometrists on which over 80% of the profession rely.

I also believe that being a Councillor improves your clinical practice because you mix with so many other optometrists and eye health professionals that you’re constantly involved in informal peer discussion.

As chair of the AOP I want to make sure that we tackle a range of issues, including supporting AOP members throughout their careers, particularly in new areas such as wellbeing.

I also want to make sure we are increasing the public’s awareness of our members’ roles; that we are defending our members’ interests and livelihoods when they are threatened by politicians, regulators, the NHS or employers; and that we are keeping our members up-to-date, practising safely and that they are equipped for the future of our profession through our CET and CPD programmes.

I believe that for a chairman to be effective, they need passion and commitment to the cause (our members’ interests in the case of AOP) and courage to enable the AOP to make decisions in the best interests of the whole membership, which may not be popular with everyone in the profession.

Since I joined AOP Council, the Association has expanded to meet increasing demands from members for clinical, legal and regulatory advice and for other support year on year.

The AOP has embraced technology to improve the efficiency and delivery of member support, including developing online resources such as our forums and website. The AOP has realised that sometimes we must shout loudly for our members’ interests in spite of any consternation that may cause other optical bodies.

To practitioners who are not members of the AOP I ask, ‘Who’s got your back and who will put your interests first when the chips are down?’

Forget politicians and regulators; charities and public interest bodies; the NHS; your employer and your employer’s insurer: only the AOP will protect, support and represent you throughout your career.

The back-up to optometry on my university application form was BSc Physics and Music, so if I wasn’t an optometrist I would probably be a sound engineer or a teacher of physics or music.