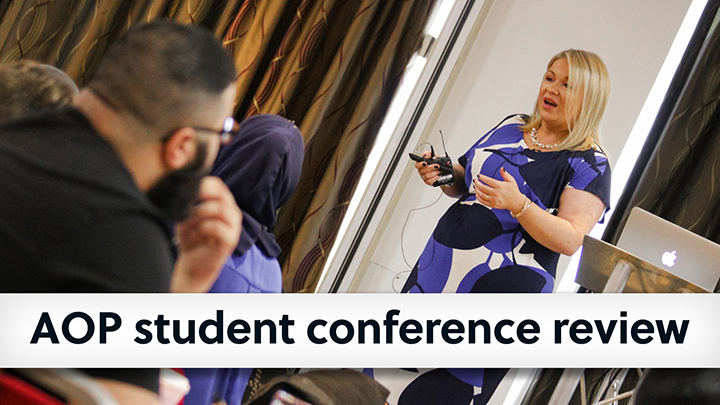 More than 200 optometry undergraduates from all 10 UK universities that offer the degree attended the AOP’s popular student conference in Warwick last month (26–27 November).

For the first time, the annual conference welcomed third-year students to the event following the introduction of a dedicated programme stream, which focused on a range of clinical and pre-reg advice. It also allowed the students to participate in their first peer discussion, a mandatory requirement of the General Optical Council’s enhanced CET cycle, which they will be required to complete after qualifying.


The second-year stream saw students learn about the career options that are available to them after qualification, from the multiple, independent and hospital settings, to industry and charity. They also received CV and interview advice from careers group, CoSector.

The AOP’s senior solicitor, Ella Power, was on-hand to speak to delegates from both years. While she highlighted the legal pitfalls to be aware of on qualification to second years, third years were informed about the Association’s pre-reg contract query checking service that is offered to AOP student members.

Speaking about the event, Aston University’s Aaisha Anwar told OT: “I came to the student conference this year because I thought it was a great way to network with other students across the country who have the same interests as me in optometry.” She added that she thought it is an “insightful and informative” event.

Sharing her highlights from the conference, Aisha Saddiqa, from Ulster University, said: “[The highlight] for me personally was gaining a different outlook on specific clinical skills, looking at them from a new angle that I wouldn’t have done normally.”

The University of Manchester’s Josie Evans added: “It was nice to learn more about what the pre-reg period would be like as we are left a little in the dark about it during the third year, so that was really useful.”