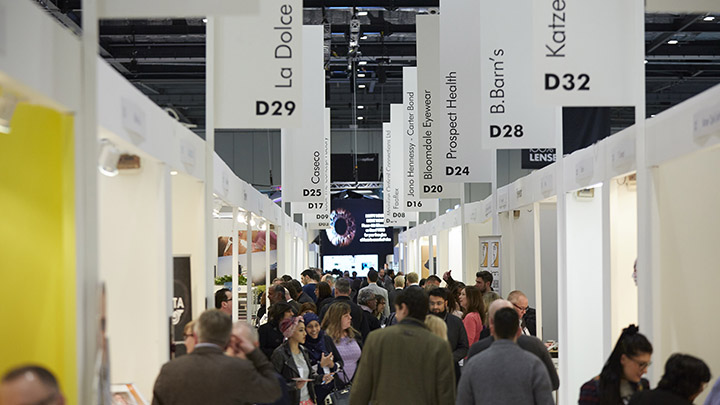 A 20% increase in visitor numbers to 100% Optical, which was held at London’s ExCeL Exhibition Centre earlier this week (February 6–8), has been reported by organisers.
Hosted over three days, the event combined an exhibition of more than 200 companies, with a comprehensive education programme which was designed and delivered by the AOP.

A number of international names joined the trade show for the first time this year, including Essilor, Specsavers, Birmingham Optical, and De Rigo.

Returning to the show for the third consecutive year were Heidelberg Engineering, Shamir and William Morris London, to name but a few.

Opening the education programme on the first day of 100% Optical was Professor Kovin Naidoo, CEO of the Brien Holden Vision Care Institute, who addressed a full Main Stage theatre on myopia as a growing public health concern.

Speaking to OT, he warned: “There are currently two billion myopes in the world right now, but by 2050 this will have risen to five billion, which represents 50% of the world’s population. That is a massive public health issue and has the potential of becoming the largest public health issue that this profession this have ever faced.”

Both the AOP and Media 10 welcomed the attendance of Alistair Burt MP, Minister of State for Community and Social Care, to the show on the Saturday. Taking to the stage to speak for the first time to an exclusively optical audience, Mr Burt said that he was determined to ensure that the development of primary care was not centred solely around general practice and that all primary care professions are recognised and valued.

Commenting on the Minister’s attendance, chief executive of the AOP, Henrietta Alderman, said: “It is particularly important to have a really diverse programme at 100% Optical and to be able to have the Minister who is responsible for optics within the show and speaking to our members about the challenges and also the way he sees optics fit within primary care is incredibly important.”

Of the 83 educational seminars hosted throughout the trade show, more than 76 were CET-accredited.

A wide range of AOP member-only seminars were hosted on the AOP stand, from sold-out peer review to sessions especially for pre-reg optometrists.

Commenting on the show, Ms Henrietta Alderman, told OT: “This is the third year of the AOP’s partnership with 100% Optical and the show’s delivery through Media 10, and it’s getting bigger and better each year.”

She added: “Supporting AOP members through 100% Optical is really about trying to deliver for our members what they need with regards to education. Therefore, with the programme that we have provided, all of their educational needs on a number of different topics are catered for. In addition to that, 100% Optical is a place to network and see a fantastic exhibition. It’s also an opportunity to bring the whole sector under one roof as a complete package.

Reflecting on a successful show, 100% Optical event director, Nathan Garnett, said: “The feedback from exhibitors and visitors has been incredible. We saw business being done from the moment the doors opened on Saturday morning, right until they closed Monday evening and the atmosphere was just electric.”

Next year’s show will be held at London’s ExCeL Exhibition Centre on 4–6 February, 2017.