Specsavers co-founder, Dame Mary Perkins, on regularly recycling her specs and the future of eyewear and personalisation

I’ve just counted them and I have 21 prescription glasses, as well as some for reading and some multifocals. My prescriptions do vary, but not by much.

When it comes to sunglasses, I have 12 in total; some are plano, a few are for reading and a couple are multifocals.

While I have one particular pair of spectacles that sit by the phone in the kitchen at home that I have had for around 10 years, the rest I regularly sort through and recycle with Vision Aid Overseas.

Can you describe your first pair of spectacles?

I got my first pair of spectacles when I was 11. They were quite modern really – they were rectangular in shape and made from a solid, thin black plastic. I was prescribed for oblique cyls, -0.75 or -1.00, if I remember correctly.

I actually didn’t wear them that much, and looking back, I’m sure that my dad, being an ophthalmic optician, simply thought that his daughter should wear glasses.

Do you have a current favourite pair of spectacles?

My current favourite are a design in our Kylie (Minogue) collection. They are smoky grey multifocals, with silver sparkly spring hinged sides. Like Kylie, I’ve not got a big face, and these fit beautifully. Plus, the multifocal lenses I have in them are comfortable.

"I have so many lovely specs, I will go on proudly wearing those when making a speech — let's face it, people expect me to wear glasses"

How long have you worn spectacles for and what prompted you to go for a sight test?

Forgetting the pair that I had aged 11, it would have probably been about aged 46. I have had my eyes tested regularly since qualifying as an optometrist in 1966. Therefore, nothing had actually prompted me to go for an eye test when I was finally given a reading correction.

I have my eyes checked regularly as I enjoy seeing whether my prescription stays similar – it does. I also like having the health of my eyes checked using technology such as optical coherence tomography (OCT). In fact, I had an OCT scan done last weekend.

Who would you pick as your eyewear style icon and why?

That’s a difficult one as there are so many general style icons nowadays who like to wear glasses.

I must say that I love Gok Wan in his glasses – he became a good customer of Specsavers and designed a range for us. Now my husband is older, he loves Jeff Banks’ designs too.

I don’t wear contact lenses because I only really have a correction for close work. However, recently I have thought once or twice about using one lens for reading at public functions, but as I have so many lovely specs, I will go on proudly wearing those when making a speech – let’s face it, people expect me to wear glasses. 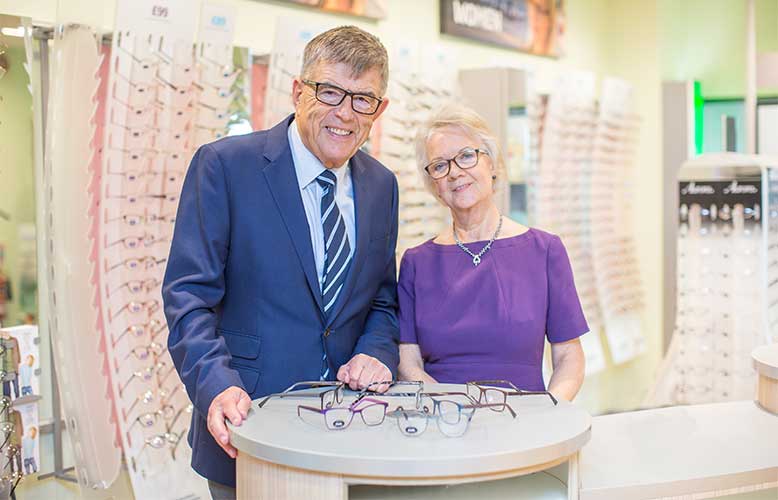 How have eyewear trends changed during your time in the industry?

I wish I had kept samples from back in the 1950s and 60s, and each decade up until now – I’d have a really good spectacles museum. Trends tend to come and go, and then come back around. However, eyewear has still really changed over my time.

There used to be lots of two-tone plastic supra frames with upswept brows that were suitable for ladies and men. Then there were the large ‘Deidre Barlow’ frames, which are being worn again now.

Up to the 1980s, NHS frames dominated, with its gold-filled half eye 722, and the children’s C223, which many disliked. They were similar to the glasses worn by Harry Potter – fast-forward three decades and people can’t get enough of them.

The 70s, 80s and 90s also saw the rise of many designer named frames – some of which had none or minimal design input from the famous name. However, they were all very expensive and were not worn by your everyday working family.

At the moment, plastic remains trendy, and rounder frames seem to be sticking around too. People seem to also be a fan of a fancy arm.

If you could get anyone to design a range of spectacles for Specsavers, who would it be and why?

Our ranges are designed to cater for spectacle wearers of all ages, not just the young who “just have to have” a designer name on everything they wear. As a result, we are always on the lookout for the next big thing, not just for our UK market, but for Australia and Scandinavia too.

The problem is that names come and go, and because we see customers of all ages, one name doesn’t always cater for them all – men, women, the young and the old.

Looking ahead, I see great potential in technology that provides customers with the ability to design their own frames. We have seen 3D printing emerge in recent years and I think, in five to 10 years’ time, we may be at the point where people can design their own frames with ease. It’s being done on a small scale already, but I think on a commercial level, as 3D printing becomes quicker and less expensive, it could become more common in years to come.

On the whole, what the spectacle wearer wants is to look great in their glasses – some will want to stand out in the crowd, others not – it’s the same with all fashion items really.