British Superbike racer, Brad Ray, talks to OT  about the practice that has supported him to find the perfect spectacles for racing since he was 14

My parents took me for my first sight test at 18 months old, as my two older brothers needed glasses. It turned out I needed glasses then and I have worn them ever since. I used to have a pair of flexi glasses as I would always break my old pairs playing sports or from being under my helmet, as I’ve been racing since I was four years old. It wasn’t until I went to see Jim Green and Eyesite Opticians in Brighton, at the age of 14, that I was able to really progress in my career.

I currently have four. I have a pair of Oakley Latch, which are my daily glasses and I use when I’m not racing or training. I also have a nice pair of Ray Ban prescription sunglasses. Without putting them on your face, you wouldn’t realise that they had my big +6.5 prescription in, so it’s a pretty amazing job by Jim and the team. I also have two pairs of Oakley Crosslink, which are my racing spectacles. 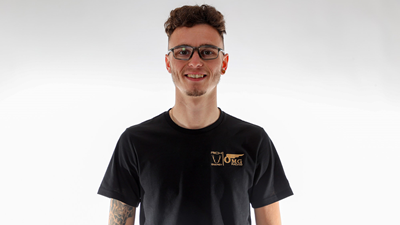 Brad Ray, British superbike racer
I think my Oakley racing spectacles are my favourite pair; they are more curved, have silicon behind the ears and are wrapped around the face more. They also have clear arms, whereas in the past I had black frames. I prefer the clear sides as it gives me an even wider field of vision, which is exactly what I need for racing, giving me potentially 160 degrees of vision. When I put them on it’s like wearing an old pair of slippers, and they are so comfy that I sometimes forget they are on my face.

What is important to you in the eyewear you choose, either for leisure or for competing?

We’ve talked a lot about mental preparation on a race day and removing anything that I may have worries about, and my eyewear plays a big part in that. For example, I never have to worry about weather conditions, as my racing specs use Essilor lenses with their Optifog coating and Crizal Sapphire treatment. This means, whether it’s warm, cold or chucking it down with rain, they never fog up.

Even my leisurewear glasses are important because I have to feel comfortable in them, as pre-race is a huge part of the event itself; it’s about getting myself in the right frame of mind for winning. Having the right eyewear for my needs has definitely made me a better racer.

What made you decide to compete in your glasses, and have you tried other options such as contacts?

With a +6.5 prescription in my left eye, +6.75 in my right and a -3.5 astigmatism, there hasn’t really been a lot of choice but to wear glasses. I can get away with wearing contacts in day-to-day life but when we tried them for racing the vision was never clear enough, and due to my reduced blink rate and the wind in my face when I’m going at speeds of 150mph they tend to dry up a bit more. We’ve also discussed laser eye surgery, but the fact is, my glasses work, and we’ve decided it makes no sense to risk something that could make it worse.

How long have you been visiting Eyesite Opticians and what was it like to receive your personalised spectacles from them at the age of 14? 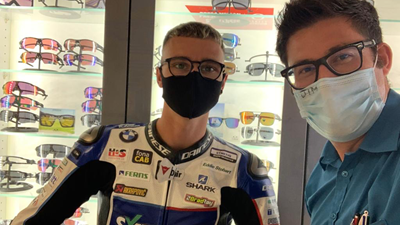 Brad Ray, British superbike racer and Jim Green and Eyesite Opticians
It was incredible. I went to see Jim and the team at Eyesite for the first time in 2011 and we sat down for a good hour to talk about what I was looking for and the problems I was having, such as headaches from looking over the top of my glasses, or that they would slide down my face. We then spent probably another two hours doing, what I’ve come to realise, is the most advanced eye test you can get on the High Street.

When I first put on those personalised racing specs it was almost like seeing again, everything was crystal clear. The first time going onto the track with them was an absolute gamechanger and allowed me to take that next big step at a crucial time. There was a period where I thought that I may not be able to compete professionally, as there was no-one on the grid that even wore glasses, never mind had my unique prescription. But since that first visit to Eyesite, I have never once thought that my glasses would stop me competing at the highest level.

Could you describe your relationship with the practice now, nine years on?

I still return to Eyesite every year before the season starts, not just because it’s part of my medical submission before the first race, but it also gives us a chance to tick the box that my eyes are doing everything we want them to do. I have a really good relationship with Jim, which means that I’m able to articulate what’s working well, and he has been brilliant at understanding my requirements. Every year we work together to try and get that extra one, two or three percent out of the glasses to keep improving. The work never stops really.

Me and Jim have also talked about understanding my vision and glasses as not an impairment, but rather as my superpower. Through the support I have received, I probably know my eyes better than anyone on the grid and, really, that assistance from Eyesite has been the difference between having a career and not having a career.

How important is eyewear to reflecting your personality?

I’ve worn them for longer than I can remember. Wearing glasses has defined my whole career. When I first started out I had these round glasses and, coupled with my slightly blond hair back then, I became known as the Milky Bar Kid. Glasses have always been a part of who I am, and I think they will always be a part of who I am. To be honest, I don’t think I would ever change that.

What are your top tips for others in selecting the perfect pair of spectacles?

The most important thing is going to see someone professional who knows exactly what they are talking about when it comes to both glasses and eye tests, as well as finding someone who understands exactly what you need. Once you have that, your options are endless really, as there will always be a pair of glasses out there for what you want, whether that be for leisure or for sport.