“Every decision that you make has a knock-on effect”

What were you doing for the last hours that you were a teenager?

George Bailey’s 20th birthday was spent on the show floor at one of the UK’s largest optical events describing his vision for a sustainable eyewear brand.

Coral Eyewear was established last year after the University of East Anglia student received £50,000 in Scale It funding to develop his range of spectacle and sunglass frames made from recycled plastic.

The company uses a hybrid of nylon waste collected from oceans and landfills all over the world sourced through a partnership with Econyl.

The aim is to incentivise customers to return their used frames which would then be fed back into the production process.

Ultimately each pair of Coral Eyewear frames could one day contain multiple generations of plastic, bringing new meaning to the weathered concept of brand DNA.

“Although currently we are using fishing nets, we hope that we will be using our own frames in the future,” Mr Bailey explained.

A desire to steer clear from the waste created by fast-fashion has influenced the approach to design taken by Coral Eyewear.

The brand has six frames in four different colours.

“The brief that we worked with was that we wanted commercial styles that we knew would be popular. We didn’t want to create a press piece that was nice from a design perspective but which people wouldn’t actually want to wear,” Mr Bailey shared.

“We want to stop frames from sitting in warehouses and factories,” he added.

The second-year philosophy, politics and economics student has brought his parents, who previously owned BOS Opticians in Manchester, into the business full time.

The concept for Coral Eyewear came while Mr Bailey was browsing an optical trade show.

“I wanted to look at ways that I could make a difference from a sustainable angle. With my family background in eyewear and optics, I thought there was definitely a market for creating a recycled product that also looks great,” he shared.

Motivation comes from the concept that when it comes to sustainability, individuals do have the power to make a difference.

“Every decision that you make has a knock on effect. I hope that this can create a difference for the patients and the consumers who we serve,” Mr Bailey said. 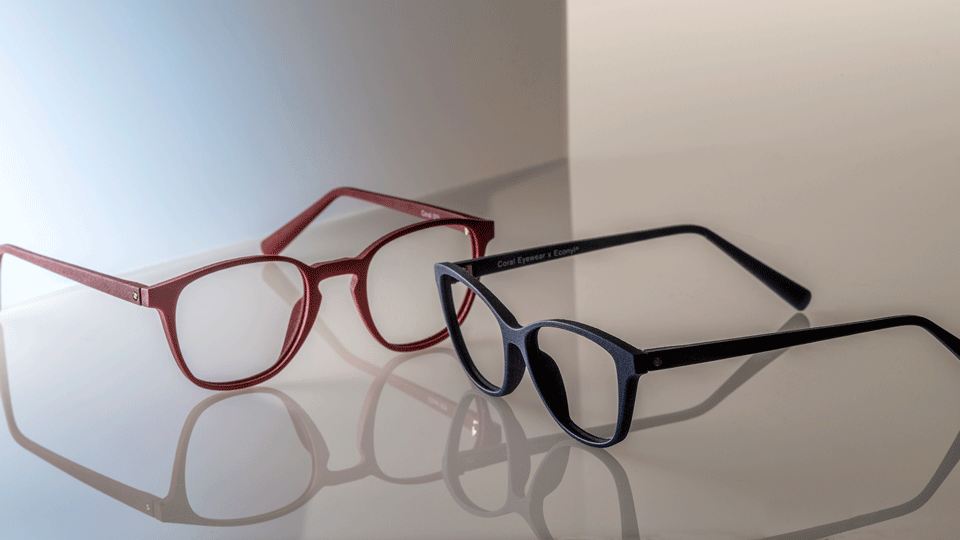 Credit: Coral Eyewear
Coral Eyewear uses a hybrid of nylon waste collected from oceans and landfills all over the world
When looking at the optical industry generally, Mr Bailey believes that there should be less of a reliance by eyewear manufacturers on virgin plastic as well as a broader look at the production process for spectacles and sunglasses.

This would include an examination of how products are shipped and what happens at the end of use.

“In the UK there has been a contact lens recycling scheme. We are seeing garden furniture made from contact lens packaging which is really great,” Mr Bailey said.

He has partnered with a company named Econyl that sources recycled fishing nets and other plastics to produce material for brands such as Adidas and Stella McCartney.

The Coral Eyewear frames will be made by melting plastics and injecting them into a mould by workers at a family-run factory in Italy.

The frames will be packaged in tissue paper rather than plastic bags and sustainable transportation will then be used to ship them to the UK.

When asked how he has found translating the theory learned in lecture halls to the world of business, Mr Bailey highlighted while there has been a transition, the focus of his degree has been on pragmatic action.

“A lot of philosophy degrees focus on theory and history. Within my degree, I tried to choose modules that focused on action,” he shared.

“If you are looking at environmental ethics, the question is not ‘Should we?’ but ‘How do we?” Mr Bailey observed.

The Coral Eyewear team has grown to seven, including interns from the University of Anglia, based in Norwich and Kent.

“I found that when I took on the project it helped me balance my study by creating an ethos of focus,” he said.

“I know that when I have the time to sit down and do some university work I really have to focus and get it done within a set period,” Mr Bailey emphasised.