07 August 2019 Advertorial
Brought to you by

Ball & Gatehouse Opticians was established in 2015 when optometrist Oliver Gatehouse, alongside his wife Nicola, took over the practice they had previously been working in.

In a bid to modernise the practice, Oliver looked directly to Optos technology. He explains: “From the very start we wanted to build on the enhanced services already offered and find something more striking to set us apart from our competitors.”

Within six months of establishing his practice, and after attending Optrafair, Oliver decided to invest in an Optos Daytona.

Producing a 200° single-capture image of the retina in less than half a second, known as an optomap, the Optos Daytona has the potential to make serious eye issues, such as retinal breaks, tears and detachments, more visible.

Despite Ball & Gatehouse Opticians offering assessment of red eyes, glaucoma, and flashes and floaters, its unique selling point is its retinal imaging device.

Oliver proudly acknowledges: “We’re the only practice in the area to offer such cutting-edge technology. As far as I’m aware, our patients would have to travel as far as North Wales to come across it elsewhere.”

As well as differentiating Oliver’s practice, the Optos Daytona has dramatically increased the quality of care his patients receive. Allowing for an ultra-widefield (UWF) image of the eye, the device picks up alterations in the retina’s periphery that might otherwise go unnoticed and have a potentially detrimental effect.

Oliver expands: “Using UWF technology, we’ve been able to spot retinal tears and holes that we would have previously missed. We’ve even observed changes to vessels in the periphery, which has led to patients swiftly receiving necessary laser treatment to prevent their conditions from worsening.”

Three of the five optometrists working at Ball & Gatehouse Opticians are locums and frequently work in opticians that don’t offer Optos technology. Oliver comments: “Having worked with and without UWF, our locums really appreciate the reassurance it provides during consultations. It’s so central to our practice and to quality customer care that we’d now be at a loss diagnosing without it.”

Half of Ball & Gatehouse Opticians’ patients now actively choose optomap as part of their eye tests. Offered to all for an extra fee, the service takes the form of an upgrade package for NHS patients. It is visibly marketed throughout the practice and all front of house staff are confident in discussing its benefits with patients.

Oliver explains: “When confronted with their optomap, our patients are amazed by the level of detail captured. A lot of them have never seen the back of their eye before and are really impressed by what the technology can uncover.” He adds: “Our Optos device is key to patient retention and even helps us attract new customers.” 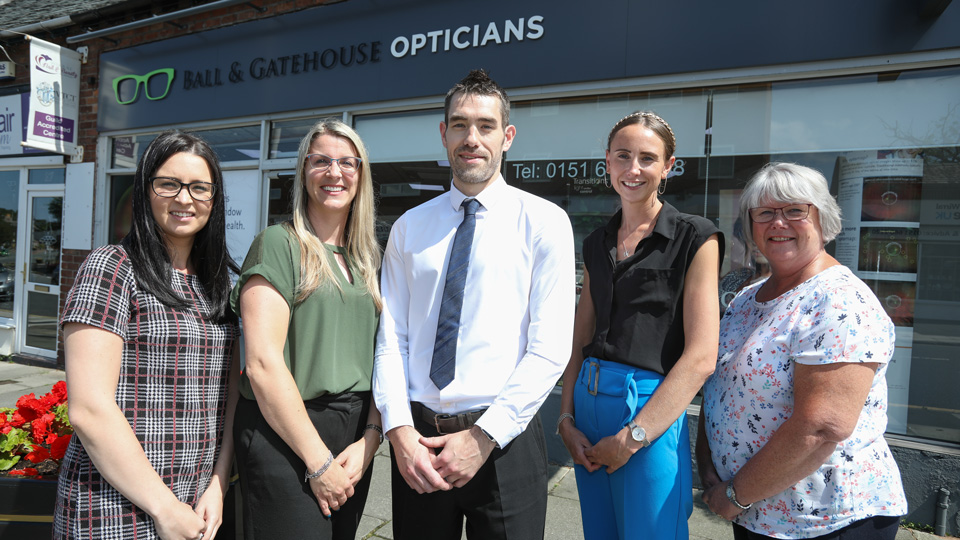 The team at Ball & Gatehouse Opticians

Oliver’s original mindset behind investing in the technology was that, whether the device broke even or cost the practice slightly, improved customer care was well worth the added expense. Nonetheless, once costs had been covered and the Optos Daytona had effectively paid for itself, it yielded a £10,000 profit for the practice over 24 months.

Confident in the financial and medical benefits Optos technology brings, Oliver is now looking to upgrade the practice’s Optos Daytona to an Optos Monaco, which incorporates optical coherence tomography (OCT) functionality. He says: “When we were first looking to invest in the latest technology we had to make a choice – OCT or Optos. With both technologies now rolled into one device, we can become twice as strong while maintaining our unique selling point.”

The device is really straightforward and easy to use, so much so that we never faced a learning curve when integrating it into our practice. While we hit the ground running with it, it’s reassuring to know that Optos are always there to refresh your knowledge, provide further training and offer support if we come across any problems

Smooth process from start to finish

Although Optos offers the chance to trial its technology, Oliver decided to forego this step and jumped right in with his investment in the Optos Daytona. Following one single day of training by an Optos representative (for which Ball & Gatehouse had a stream of patients booked in to test the device), the practice was up and running with the new offering.

Oliver reveals: “The device is really straightforward and easy to use, so much so that we never faced a learning curve when integrating it into our practice. While we hit the ground running with it, it’s reassuring to know that Optos is always there to refresh your knowledge, provide further training and offer support if we come across any problems.”

Asked if he has any tips to share, Oliver comments: “I’d thoroughly recommend that optometrists new to the technology check out the Optix Software forum and familiarise themselves beforehand with the example optomap images it displays and analyses. It’s a hugely valuable tool.”

He finishes: “Implementing Optos technology into our practice has been a smooth process from which we have only reaped rewards – I’d invite others to follow in our footsteps.”

Find out more about Optos and UWF on its website.

Brought to you by