When nothing is something

Ultra-widefield (UWF) imaging has intrinsic merit regardless of the outcome. Ian Cameron, of Cameron Optometry in Edinburgh, believes that it is important to manipulate the pervasive mindset that questions the value of a retinal scan if it shows no pathology. “A clear scan is not a failed scan,” the optometrist asserts.

Mr Cameron heads a large, single-site independent optometry practice that specialises in clinical eye care and contact lenses. He and his colleagues have long been known for employing cutting-edge technology in the practice. Although he had regarded optomap® technology with great interest for many years, he did not purchase a device until the introduction of the Optos Daytona in 2014.

"It is a great technology and there has been a huge benefit to having it in our practice," Mr Cameron said.

The optometrist shared that he utilises the technology as a component of a standard exam package, which also includes the use of optical coherence tonometry (OCT) and a fundus camera.

"I have been using the Daytona on every patient since day one," the optometrist confirmed, adding: "We have one level of eye exam that is the very best that we can do. So everyone receives an optomap scan. For that reason, I needed it to be quick to use; it could not take up much space; it had to be easy for my staff to use and easy for my patients to understand." The Daytona fitted that criteria, he confirmed.

"90% of scans have nothing of great interest in them. Yet they have enormous value"

Mr Cameron explained that he uses optomap in a unique way, which has established an excellent business case for the technology. He pointed out that because optomap differs so much from OCT, as well as his fundus camera, and as a result it allowed the practice to change its pricing structure for an eye exam. "optomap is sufficiently different and so impressive that it provided a good business case," he said. "When we re-launched our pricing structure, optomap was the cornerstone investment and it has been extremely well received. From a pricing and business point-of view it has gone very well."

Mr Cameron noted that patients’ images form the basis of their consultation, and he believes that it offers a unique selling point, which is both powerful in patient education, as well as ensuring patient retention and generating referrals. "We offer a comprehensive exam and review discussion where we build the experience with patients, allowing them to first 'get their bearings' with the fundus camera and OCT, then we move on to explore the breadth and depth of view through the dynamic attributes of optomap," he explained.

"When my patients see this huge area out into the periphery of the eye, and they begin to grasp the function of their own eye, it is a really impressive moment," he elaborated. 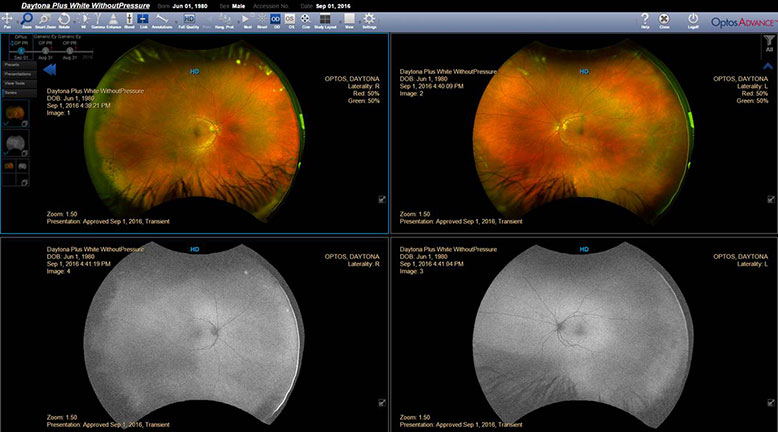 What you don't see

Mr Cameron emphasised that it is this perspective – the patient perspective – that is typically under-recognised and under appreciated. He stressed that the general focus placed on the value of UWF images needs to shift to encompass the value of the image that holds no pathology, no clues to an impending issue, yet holds an exceptional value in peace of mind for both the patient and the practitioner.

"Most lectures on new devices focus on the ‘weird and wonderful’ conditions that are detected, but in most community practices 90% of scans have nothing of great interest in them. Yet they have enormous value,' he said.

Mr Cameron explained that the clinical mind is driven to find the abnormal in a sea of normal. "What is really part of the joy and excitement of being an optometrist is finding something early and saving someone’s sight. However, from the patients’ point of view, it is completely the other way around. They don’t want you to find something. So there is a fundamental difference between what drives the optom and the patient who really can’t wait for you find nothing at all!"

The optometrist underscores the tremendous value of utilising optomap for patient education, noting that he has found it to be particularly beneficial when helping his diabetic patients see the changes occurring in their eye and motivating them to make lifestyle changes to improve their systemic health.

"When my patients see this huge area out into the periphery of the eye, and they begin to grasp the function of their own eye, it is a really impressive moment"

Mr Cameron references a recent patient who had diabetic retinopathy and who presented asymptomatic at his latest exam. The optomap showed changes which were not evident on the scan from the preceding year. This early detection and the ability to share this clearly with the patient resulted in him taking immediate action and drawing up a disease management plan with his primary care physician. "optomap is really fantastic in this way, showing subtle new changes where nothing was apparent on the fundus photo," Mr Cameron highlighted.

Even though Mr Cameron initially experienced amazement at the number of pathologies that had been missed previously, or might have been missed, his estimation of the technology quickly shifted from focusing on the 10% of scans in which pathology was found, to finding the value 100% of the time. "The value of nothing is really what this is. My patients and I are reassured by the fact that I can see so much of the retina and find nothing alarming there," he said.

Mr Cameron indicates that his clinic has experienced significant success in the confidence generated in his patient base and this has resulted in greater retention and increased referral. He said: "I don’t really worry about missing something in the macula because I use my OCT. Similarly, now using optomap, I don’t worry about missing something in the retina. optomap gives me additional confidence – the business case, the clinical aspect and the personal confidence – which are incredibly valuable. It has been a great investment."

Educated in Edinburgh, Mr Cameron graduated from UMIST with a first-class honours degree in optometry before he went on to undertake his pre-reg year at the Manchester Royal Eye Hospital. After qualifying, he worked for Eurolens Research, the Royal Eye Hospital and taught undergraduate refraction at the University of Manchester before returning to Scotland to work in private practice. Today he is managing director of Cameron Optometry Ltd, a multi award-winning business in central Edinburgh. With diplomas in contact lens practice and independent therapeutic prescribing, Mr Cameron lectures widely on all aspects of optometry and continues to be active in optometric research.