Imperatives of the periphery

The periphery matters is the assertion that is typically embraced in cases, such as retinal breaks, in which a patient might present with flashes and floaters, and a practitioner is prompted to explore the retina further. However, it is not as commonly understood in the early detection and progression of other pathologies and diseases, which are often asymptomatic in early stages, such as in diabetic retinopathy.

In a 2015 study that compared ultra-widefield (UWF) optomap technology with early treatment diabetic retinopathy study (ETDRS) (7 Standard) film photographs, 40% of diabetic lesions were discovered outside of the ETDRS gold standard area. Furthermore, the presence of the predominantly peripheral lesions were associated with the nearly five times greater progression of diabetic retinopathy over four years, independent of baseline severity and A1C.

An additional study that was undertaken demonstrated that an optomap-assisted fundus examination might enhance the detection of retinal lesions by 30%, when compared with traditional fundus examination alone. In short, without history or symptom, a preponderance of imperative data lurks outside the standard view.

UWF optomap imaging has opened an expansive view of the landscape, exposing otherwise obscured issues. The increasing utilisation of this technology is rapidly changing the vistas of ocular healthcare. Contrasting exploration prompted chiefly on a patient’s report of symptoms or history, and conducted with limited scope, optomap imaging captures a high resolution, 200° digital image of the peripheral retina, as well as the central pole, in a single dynamic image. 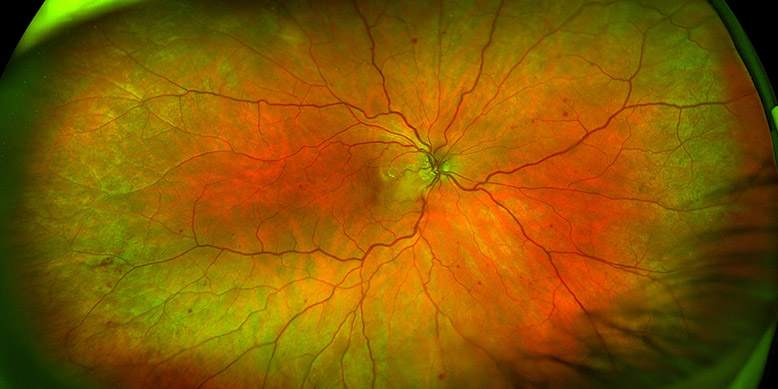 Dr Jeffry Gerson, of Grin Eye Care in Kansas City, was an early adopter of the optomap and has observed the evolution of the technology over the last 13 years.
Dr Gerson immediately saw the value of UWF optomap imaging and concludes that he cannot imagine practicing without it. “Initially it impacted on how I practiced. Because of an increase in pathology, I was suddenly able to identify what I did not expect to see, or otherwise would not have seen,” he explains.
Dr Gerson adds that he has found that optomap technology has increased in value through the identification and treatment of peripheral retinal breaks, assessing risk in diabetes and in understanding how the peripheral retina corresponds with macular pathology.
In the case of peripheral retinal breaks, Dr Gerson notes that, historically, discovery was typically directed by patient reports of symptoms. “However,” he emphasises, “we discover peripheral pathology frequently in patients who are completely asymptomatic.”
An assessment of diabetic risk, or severity of disease progression, can be observed in advance in the presence of subtle, peripheral retinopathy. “If you are not looking at the peripheral retina, you don’t have the whole picture, and you are not able to adequately assess risk. This is why we need to look at everybody and see what is out there,” Dr Gerson says.
The optometrist further explains that the peripheral retina often corresponds with macular pathology. “Looking at optomap autofluorescence images enables me to identify peripheral changes that cue me to look at the macula harder. The colour images may not look bad. However, the functional ability may not be good,” he says.
Dr Gerson notes that the consistent discovery of peripheral pathology and the early detection of disease in the periphery have become somewhat normalised in his practice. “This aspect – that I will find what would otherwise be obscured pathology – no longer surprises me.”

However, he stresses that the advances in optomap technology continually enhance how he practises. “Over the years I have witnessed the updates and upgrades as well as the advances in image quality,” he shares, adding: “I believe initially one of the big concerns for practitioners was image quality. That issue really doesn’t exist anymore. The image resolution is excellent.”

"If you are not looking at the peripheral retina, you don't have the whole picture and you are not able to adequately assess risk. This is why we need to look at everybody and see what is out there"

“An excellent example of being able to educate patients is in the cases of diabetes cases,” Dr Gerson explains. “I can help patients to become more actively involved in their own care by showing them clear examples in the optomap image where disease progression is evident. They really appreciate being shown something rather than just being told.”
Dr Gerson further emphasises that fundus autoflouresence (FAF) imaging is similarly effective in patient education. “This has been particularly helpful with my patients with retinitis pigmentosa,” he says, adding: “The FAF image clearly shows the progression of the disease. Relying on the colour image is not nearly as effective.”
Another example of where AF is helpful is in dry age-related macular degeneration, or geographic atrophy. In such cases, AF will identify whether the disease is stable or active based on hyper verses hypofluorescence.

Dr Gerson describes grasping the potential and importance of utilising all of the functions of optomap technology as “an evolving mindset,” wherein practitioners must progressively venture beyond the ability to obtain a UWF colour image and further utilise red/green separations and AF to obtain a comprehensive picture of a patient’s ocular health. 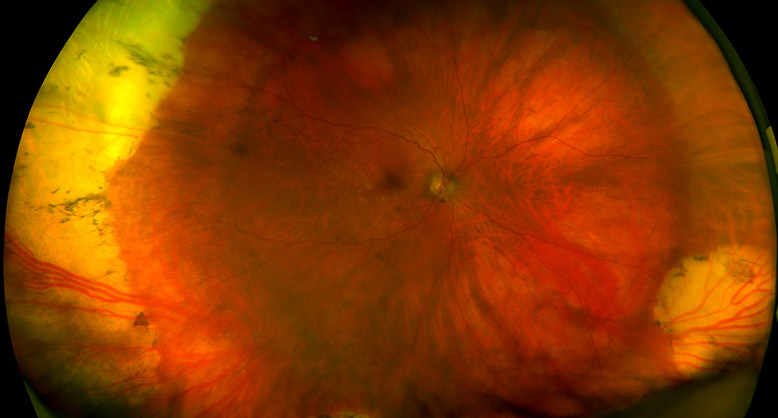 Jeffry D Gerson is a practising optometrist, as well as a writer, lecturer and thought leader on retinal disease management. He graduated from Indiana University School of Optometry in 1997 and completed his residency at the VA Medical Canter in Kansas City. He went on to become faculty at the University of Kansas School of Medicine. Dr Gerson is a member of American Optometric Association and Kansas Optometric Association, which named him Young OD of the Year in 2008. He is also a fellow of Academy of Optometry and Optometric Retina Society and serves on numerous advisory boards.

Watch Jeffry Gerson speak at 100% Optical 2017. His main stage lecture on Why the retinal periphery matters will be held on Sunday, 5 February from 11–12.00.