The views of consumers when it comes to their contact lenses were explored during a roundtable event hosted by CooperVision in Newcastle in November (4 November).

The contact lens manufacturer gathered 24 consumers to discuss what they want from their contact lenses, as well as their understanding of the options that are available to them, including modality and materials.

When discussions began, it was clear straightaway that while the majority of consumers were comfortable sharing the name of their lenses and the frequency at which they changed them, no one was aware of what material their lenses were made from.

“I didn’t know that there was so much choice,” 31-year-old consumer Kirsty, who is a daily disposable silicone hydrogel lens wearer, told her group, adding: “I didn’t go into that much detail with my optician. Although I tried four different lenses, I just picked the one that felt most comfortable.”

Similarly, in the daily disposable hydrogel lens wearing group, 55-year-old consumer Angus, who has worn lenses for 30 years, said: “I wear daily disposable lenses and I wear them all day, every day. I know that they are daily disposables, but I couldn’t tell you what type of lens they are.”

While consumers expressed an interest and knowledge about their choice of lens modality, the majority said that, prior to the event, material was something that they had not considered.

Many consumers shared that they had listened to their optician’s advice on contact lens modality and what was recommended to them, and made their selection accordingly, but that material was not commonly discussed.

“I listen to my optician and go with their expertise and what they say,” consumer Kirsty said.

Unaware that their contact lenses were made from silicone hydrogel, consumers in this group explained that they had opted for daily disposables due to both convenience and infrequency of wear, which made the lens modality more cost effective for them.

Many of the daily disposable silicone hydrogel wearers had previously worn frequent replacement lenses and stated that they made the switch due to convenience, cost and experience of infections. These reasons were more paramount to their lens choice than the notion that daily disposables could be a healthier lens modality for their eyes.

Being a dual spectacles and contact lens wearer who wears contact lenses mainly for sport, 47-year-old consumer Matt said that daily disposables were “more cost effective than monthlies” for him.

“There is a lot of new technology out there so I am interested to know why I have not been informed of that and what is new, just so I can have the best possible lens, even if it costs more money. If it was more comfortable and I could wear it for a little bit longer, I would be more interested in doing that.”
Kirstie, 31, Newcastle: Daily disposable silicone hydrogel lens wearer

“For me, it’s always about moisture because where I work has air con and computers so it is the worst place for my eyes.”
Ashleigh, 28, Newcastle: frequent replacement lens wearer

All consumers who wore contact lenses spoke openly about how they would like to wear their lenses for longer than they currently do, with comfort, eye dryness and irritation all frequently referred to as barriers to wear time.

Consumers in the daily disposable silicone hydrogel group shared that they wear their lenses for between seven to 12 hours.

When asked if they felt restricted by their lens wearing time, the consensus from this group was that they did.

Longer wear times were also acknowledged by consumers who were considering contact lenses, with all day wear expressed as what they desired.

For 51-year old non-lens wearing consumer Alison, she was looking to be able to build her contact lens application and removal in to her morning and night time routines. “[I would like to] put them in when I clean my teeth in the morning and take them out when cleaning my teeth in the evening,” she said, to much agreement from the group. 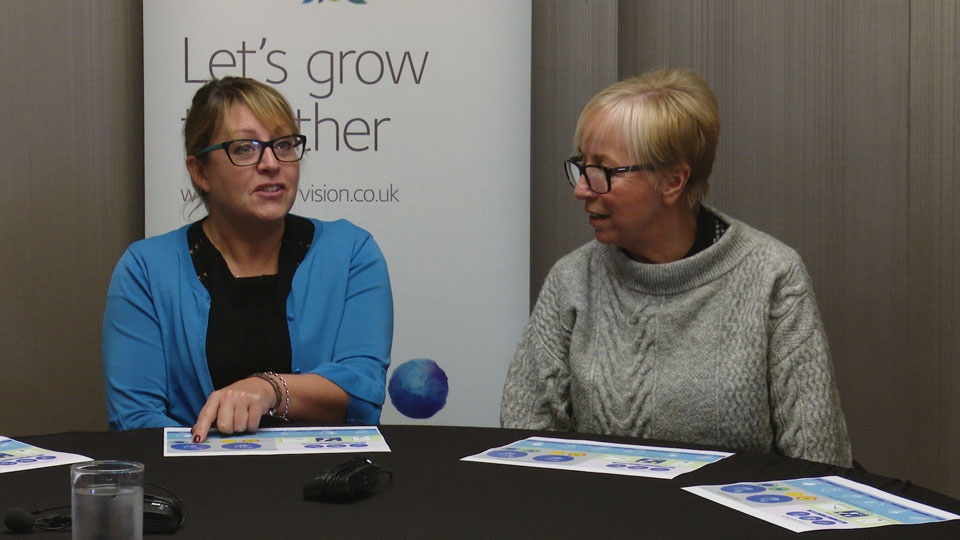 Having had a whistlestop tour of the differences between silicone hydrogel and hydrogel lenses earlier in the evening in a presentation by contact lens optician and CooperVision professional services consultant, Sam Armstrong, consumers expressed an interest in learning more about the technology involved in developing contact lenses, specifically the benefits of different materials and their link to oxygen accessing the eye.

Expressing shock that they were wearing lenses designed using technology originally developed in the ‘70s, consumers in the daily disposable hydrogel group said that while they wouldn’t research contact lens technology themselves, or raise it with their optician, they would welcome the optician speaking to them about it.

When asked if they felt that the optician was there to recommend and offer them the best option for their eyes, the group unanimously agreed.

Consumer Angus said that he welcomes his optician informing him of what options are available for him. “Over the years, every two years or so, my optician has upgraded me. They’ve told me that something new is out and asked if I would like to try it,” he shared.

One daily disposable silicone hydrogel lens consumer pointed out that being informed about the technology and materials would mean that she understood her eyes better. “I would like to be told and know more about oxygen getting to the eye,” consumer Kirsty said, explaining that if she understood more about the technology she would have known why her eyes sometimes appear red, for example, and would not assume it was due to infection.

While a number of consumers felt that the optician should raise new technology with them, they were aware of time constraints on the appointment, with 28-year-old frequent replacement lens wearer, Ashleigh, commenting: “[Technology] has changed so much so it would be interesting to find out how it’s working,” adding that for opticians to do this may be “tough on consultation times.”

Consumers in the frequent replacement lens group discussed how they cannot always remember what it discussed with them during their appointments at the opticians. As a result, 55-year-old consumer within the group, Brian, suggested that giving patients information to take away with them from the appointment would help keep them better informed.

Asked by CooperVision senior marketing manager for the UK and Ireland, Sarah Weston, if consumers in the non-contact lenses wearer group felt that the use of oxygen maps was an effective way to explain technology benefits, there was agreement.

Speaking to and educating patients about technology regarding lenses appeared to ease non-lens wearers’ nerves about opticians being sales people and there was general agreement that while they would like to be told about new technology, they would question the reasons behind it.

“I would like to hear about new technology, but I am always suspicious about whether it’s for a sales-related reason,” said 55-year-old non-lens wearing consumer Christine.

While these suspicions were acknowledged by the group, they also agreed that their optician was also an expert of the eyes. “They have a duty of care and there are so many things that they can pick up before it leads to blindness,” consumer Alex said.

“Just like a heart specialist specialises in the heart, my optician specialises in eyes. But I do believe that there is an aspect of sales in there too – perhaps its 90% about the eyes and 10% sales,” said 44-year-old non-lens wearing consumer Rob.

Sarah Weston, CooperVision senior marketing manager for the UK & Ireland: “[Consumers] want to know about the options available to them. They want value for money, but that doesn’t necessarily mean the cheapest thing.”

Sam Armstrong, CooperVision professional services consultant: “Build rapport with your patients. The [consumers] who said they were more loyal were the ones who had built a rapport with their optician. They felt that they had a connection and that their optician had understood their needs.”

Tim Wooff, director of Wooff Research: “The best consumer is an informed consumer as they then make the right choice. But, if you don’t give them the choices in the first place, what are they meant to do about it?”

When consumers in all four focus groups discussed the aftercare appointment, there was a general consensus that consumers were keen to hear the views and recommendations of their practitioner.

When asked about their expectations of their optician when it comes to discussing contact lenses, daily disposable hydrogel lens wearer Sarah said: “You would assume that you are in the best lens as it’s recommended by your optician.”

The level of satisfaction that consumers had for their lenses appeared to correlate to the level of loyalty that they had with their optician.

Frequent replacement lens wearer Ashleigh had used the same optician for ‘a long time’ and tried various modalities during that period. When speaking about her optician she said: “My optician is really good and if I wanted to try something new, he would give me a trial.”

“He’s honest and will tell me the truth about things,” she added.

A second frequent replacement lens wearer, 55-year-old Janet, expressed fierce loyalty to her optician. “I think it’s because I can see properly now,” she said with a smile. 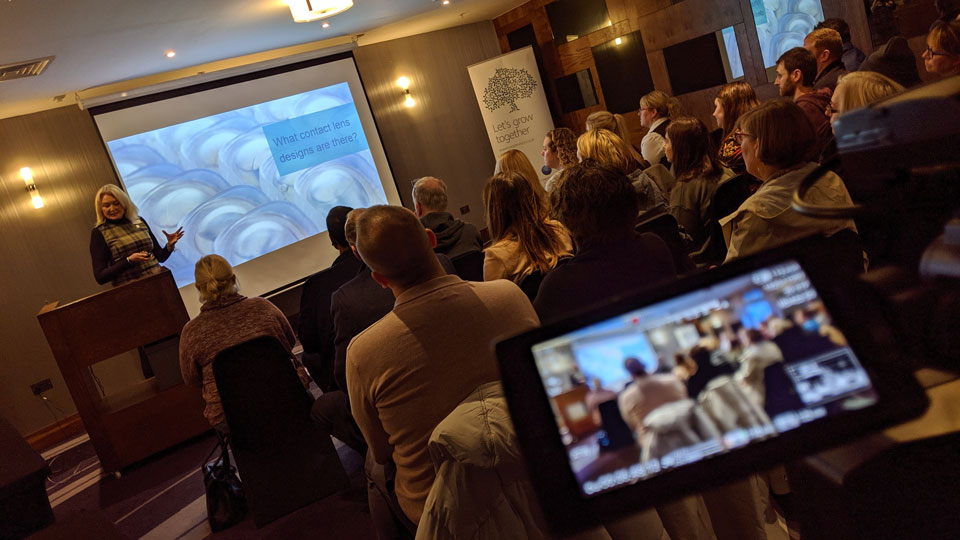 Consumers listen to a presentation by Sam Armstrong
When it comes to switching lenses, consumers had mixed views.

“If I was told that there was only one option, I would ask why,” non-lens wearing consumer Rob said. Similarly, consumer Karen said: “I would question [my optician] without a doubt.”

“I would question my optician and go elsewhere,” added consumer Alex.

Like the majority of non-lens wearers in the group, Rob would also do his own research before visiting his optician. “I would research on the internet about contact lens suppliers and providers to find out about what was available before I went to my appointment,” he said.