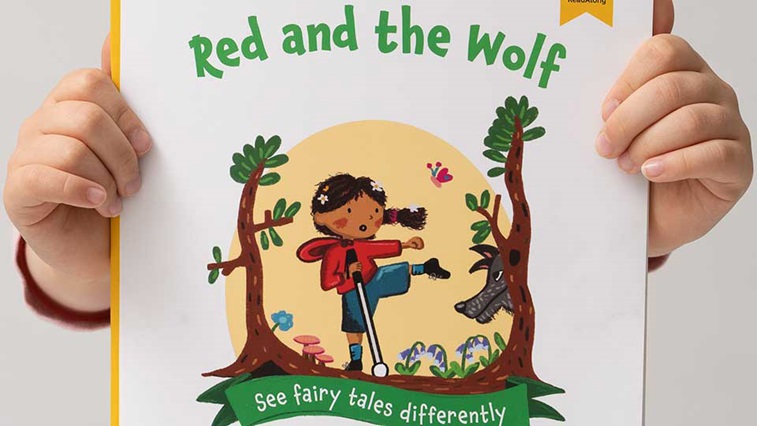 The Royal National Institute of Blind People (RNIB) has put a spin on the classic story of Little Red Riding Hood, by reimagining its central character as a visually impaired little girl who walks with a cane and has a skill for martial arts.

The charity hopes that the book, entitled Red and the Wolf, will counter the lack of disabled role-models in children’s books.

Aimed at children aged three to seven and written by author Deborah Fajerman, Red and the Wolf is available in accessible formats.

The RNIB hopes that the book will shine a spotlight on the lack of positive role models with disabilities in literature.

RNIB head of innovation and development, Caroline Beard, said: “Some of our earliest perceptions of the world are shaped by the books we read as children. It is essential that children see disability as natural from an early age, gain an understanding of difference, and can help all children, including those with disabilities, feel included in society.

“We launched Red and the Wolf to refresh a classic story and turn it into something that celebrates difference. We hope that many children will enjoy reading about Red and how she overcomes the barriers she faces.”

When developing Red and the Wolf, the RNIB found that 78% of parents and grandparents said that they would like to increase children’s awareness and understanding of disabilities.

Author Deborah Fajerman said that she was “overjoyed” to work on the book with the RNIB.

“I've worked for many years in disability organisations, writing about and talking to people with sight loss and other disabilities,” she said. “I think that reading this picture book with a young child is a great way to create some space where they can look and ask questions.

“Obviously, this story is not going to show what the daily reality is for any one child with sight loss, but we can make it something that's ok to talk about.”

Red and the Wolf is available to purchase now from readalong.org.uk for £8.99, including delivery.

All formats include audio and special sound effects, which are designed to enable children to ‘read along’ with the story, helping young readers to enjoy the story independently.