Larry Benjamin, retired ophthalmic consultant and an overseas volunteer with Orbis for 16 years, on scaling up the charity’s remote training capabilities in light of COVID-19

Beginnings and working with Orbis

I was taken to see the previous Flying Eye Hospital when it was at Stansted in 2004, by Alcon. I was impressed by what Orbis was doing. The thing that impressed me most was that they major on making things sustainable, teaching local people in organisations how to do their own thing rather than doing fancy surgery and flying out again. It was the sustainability aspect that I liked.

Who: Larry Benjamin, volunteer with Orbis
Location: Milford on Sea, Hampshire
Priority: Maximising remote training for medics during the pandemic

My first trip was to the Philippines. I've done a few trips since then, around the world, at a minimum once, and sometimes twice, a year. It's been interesting. I used to take annual leave, because the trips are usually a week. It didn't interfere with NHS work at all really, in that respect.

On one trip I took my wife and my daughter with me to Zambia - my daughter was a medical student at the time, so it gave her a bit of insight into one aspect of what goes on. 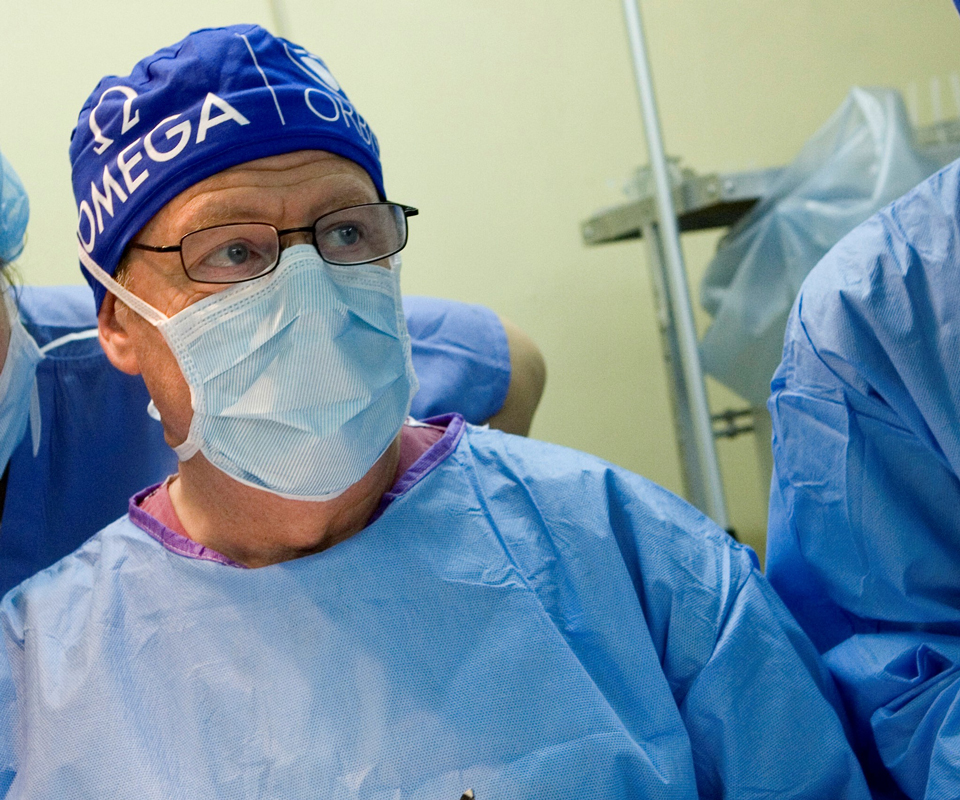 Orbis
Operating in Zambia in 2012

Part of my NHS job has always been teaching and training, and in the UK I've helped set up microsurgical skills training for ophthalmology since the early 1990s. So, I've always been involved with that side of things. Part of what Orbis does is passing that on - it's not only teaching skills; teaching how to teach has also become an important thing. Not everybody is a natural teacher, but I think learning how people learn and how to teach is quite important. We try and build that into all the programmes now, which is good.

I delivered a lecture to Cameroon at the request of one of the nurses, who wanted his team to know more about paediatric cataract management. We just set up a Zoom call. That sort of thing is happening a bit more spontaneously

Most of what I do is hospital-based training, which is where you go without the aeroplane, just fly out either with an eye care nurse or an orthoptist and an optometrist, and run a programme in the local hospital. I've been with the Flying Eye Hospital several times, but I think the majority of what I've done has been without it. The plane does eight programmes a year, on average. So, there are many more programmes that go on outside that, which are hospital-based training. I've done a bit of each, and they're different. When the plane is there, it's like having a fully-fledged, very modern operating theatre with you. You've got everything you need; and you can teach to a very high level and show people what is achievable. When you're doing a hospital-based programme, it's very much that you're using local facilities and local equipment. So, it's a very different emphasis.

I like the continuity. It's a long-term project - it was a five-year programme. It's not just going to teach once and then leaving. It's making it sustainable, and going back and adding whatever they need over the years. It's been a great project.

The person-to-person aspect has just stopped at the moment, although we're doing some teaching online. I have done some remote surgery to Cameroon this year, which is not all that easy, because the video link is not instant, and the technology is not always at the level where the feed is constant. There's often a bit of dropout or a bit of freezing. When you're trying to teach surgery, that's not always the easiest thing, but we've done a bit. It's not impossible, but it's obviously much easier if you can be there.

Technology is, for the first time, available. Online teaching is relatively standard now, with Zoom. It works very well, so giving lectures is reasonably straightforward.

We've got a platform called CyberSight, which is an education platform. It does several things. If I'm going to go to Cameroon, or Zambia, or somewhere in person, they can send me details of patients two or three weeks beforehand, with photographs and videos of their, say, cataracts. I can then assess the patient a bit more fully before I get there, and select the patients that we're going to operate on before we before we arrive. That's been a really useful thing in the last three or four years. We used to have to do all that as we arrived. This has made it much easier to get the assessment side of things done quickly.

I think from a practical point of view, and for hands-on medicine, online is the only way at the moment. Online lectures, and maybe some remote teaching again, are the things that I think we're going to concentrate on, so things like CyberSight are absolutely essential. I guess that's really our priority at the moment. I think as soon as the rules relax a bit, we can start to run things like simulation programmes, where people come to the plane, for example, and learn surgery based on models rather than on people. That's for the mid-term future. But I think air travel, international travel, is going to be knocked on the head for quite a while.

A lot of the programmes that we run are on hold. For example, we do a lot of distribution of antibiotics for trachoma in Ethiopia. That's had to go on hold as well, for a while. So even that sort of thing, which is not teaching and training so much, more just delivering a service on the ground, has also been interrupted. I think the whole service has suffered.

But I think in terms of the online platform, CyberSight has taken off in a big way. The number of people using it is approaching 20,000. People have realised that they can still get access to education, to quizzes. There's some mentoring that goes on - if they have a difficult case, they can effectively phone up a surgeon in another part of the world and ask advice. That's another aspect of it. These sorts of things are still going on. We'll just make more of that if the situation carries on. It's a good facility. It's timely, because we were in the in the midst of expanding it anyway, when COVID-19 hit. So, it's been a really useful thing to have had going.

We're still fairly active in the UK office in terms of trying to monitor what's going on around the world, generally, to see what activity we can bump up and when. We're still having regular meetings online, to try and sort all that out. In terms of my own personal commitment, I'm happy to join in and do whatever is necessary for online teaching and training. A couple of weeks ago I delivered a lecture to Cameroon at the request of one of the nurses, who wanted his team to know more about paediatric cataract management. So, we just set up a Zoom call and did that. That sort of thing is happening a bit more spontaneously, I think.


Returning to the NHS as part of the COVID-19 effort

I was at Stoke Mandeville in Aylesbury, Buckinghamshire, for 30 years, and I retired in December last year. So, I haven't had much of a retirement yet. I may be going back to do some more cataract work there when this eases a bit, because there's such a big backlog in the UK, of people waiting for operations. I may be drafted back to help with that. So, I probably haven't quite finished yet.

It's a difficult situation. I think most eye units around the country are back at work doing cataract surgery. I think at Stoke Mandeville we're planning to have a vanguard theatre, a portable theatre set-up, so we can actually run seven days a week of continuous surgery for several months to try and address the backlog. A lot of a lot of places are looking at that. I'll be a small cog in that machine, hopefully, at some point.

From the optometric point of view, we’ve realised over the years what a team effort this all is. A lot of our teaching abroad involves making people aware that it's not just the surgery that's important, it's the whole system. The optometrists, in monitoring paediatric cataract over the years, as they develop, are equally important. I think trying to develop that team effort is essential.