Two practice directors from the Hakim Group have raised over £3000 for Vision Aid Overseas by competing in the Virtual London Marathon.

Sarah Baldock and Nigel Terry completed the 26.2-mile challenge on 4 October, raising £3524 for the sight-saving charity.

Their contribution goes towards the Hakim Group’s pledge of raising £100,000 for Vision Aid Overseas, which has seen a significant drop in funds since the onset of the COVID-19 crisis.

The Virtual London Marathon saw 43,000 runners choose their owns routes and take to the streets across the UK. The London Marathon, postponed and reinvented this year as a result of COVID-19, usually takes place in April and acts as a major fundraising event for a large number of charities. An event for elite runners also took place on 4 October in St James’ Park, London. 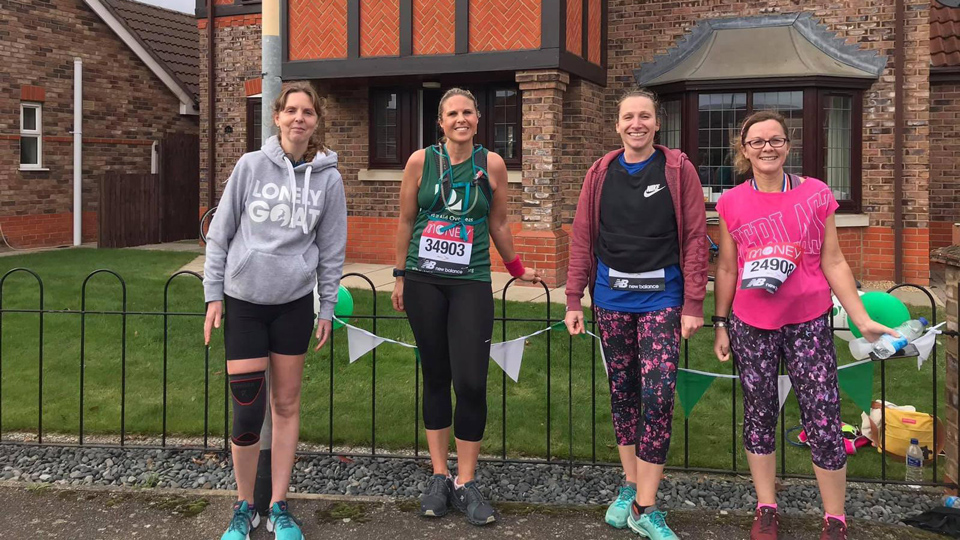 Sarah Baldock, second from left, supported by friends and family

Ms Baldock’s route involved 24 laps ‘around the block’ near her home in Heckington, Lincolnshire. She also hosted a bake sale and raffle, the proceeds of which were added to her total.

Mr Terry, who was taking part in his first ever marathon at the age of 57, owns three practices in the Black Country. He began and ended his route at Carolyn Parker Optometrists in Penkridge, Staffordshire.

His wife, Joyce, a co-director at the practices, accompanied him on her bike to provide moral support.

Mr Terry said: “I’m just delighted to have completed it. To be able to share the experience with family and friends along the route was really quite special.

“But most importantly we’ve raised money for such an important cause. Especially at a time like this, charities that support our eye health and general wellbeing are so important, so thank you to everyone who contributed and pushed us closer to our target.”

Ms Baldock, who is co-director and optometrist at Wigram and Ware Opticians in West Norfolk, said: “Vision Aid Overseas is obviously a cause that is very close to my heart, and being part of the Hakim Group we have strong connections with the charity, so it was a no-brainer who to choose.”

Both fundraising pages are still open, with Ms Baldock raising £2298 and Mr Terry £1296 so far.