Dispensing optician from Tyrrells and Embery Optometry, Usman Patel, has raised £330 for the East Lancashire Hospice in a charity 10k run 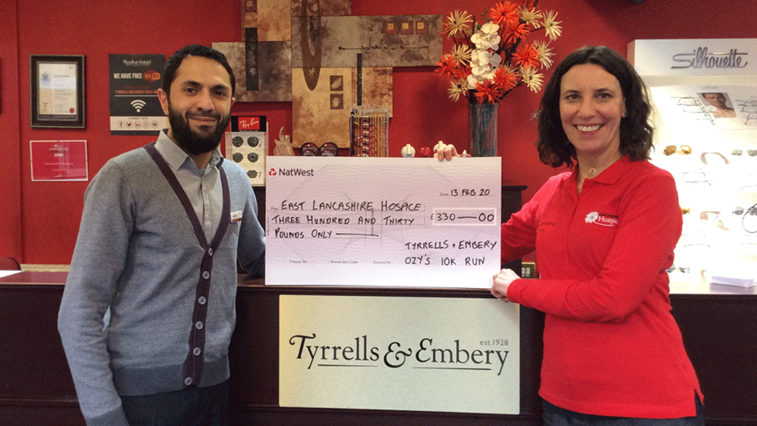 A dispensing optician from a Blackburn-based opticians has raised £330 for East Lancashire Hospice in a charity 10k run.

Usman Patel, from Tyrrells and Embery Optometry, which is part of the Hakim Group, ran the East Lancashire Hospice 10k in support of the hospice that provides specialist palliative care to patients with life-limiting illnesses and also supports their families.

The money raised adds to the wider fundraising efforts Tyrrells and Embery Optometry undertakes for the East Lancashire Hospice. The practice takes part in the charity’s annual Corporate Challenge, which encourages businesses to compete to raise the most money across a calendar year.

Speaking about the importance of the charity within the community, Mr Patel said, “I think we all know someone who has benefitted from their care and dedication.”

“We’d like to think we’re a community-focused practice at Tyrrells and Embery, so along with the Corporate Challenge, we hope to continue to support them whenever and wherever we can,” he added.

Mr Patel completed the run in just over 51 minutes and was one of over 400 fundraisers who took part in the 10k. The charity run has raised over £84,000 for the hospice over the past six years.

Calling the Tyrrells and Embery Optometry team “great supporters” of the charity, Jennifer Quinn, fundraising lead at East Lancashire Hospice, said: “We were absolutely delighted when Usman signed up for our 10k.”

“We were not only impressed with Usman’s time in the 10k but the amount he raised too. We really love working with local businesses and Tyrrells and Embery are great examples of a community minded, generous and socially engaged business. We are very proud to have their support,” Ms Quinn added.