No horsing around: Britain's first guide horse hits his straps

Digby, a nine-month-old American miniature, is being trained to help a visually impaired man with a phobia of dogs navigate the streets of Blackburn 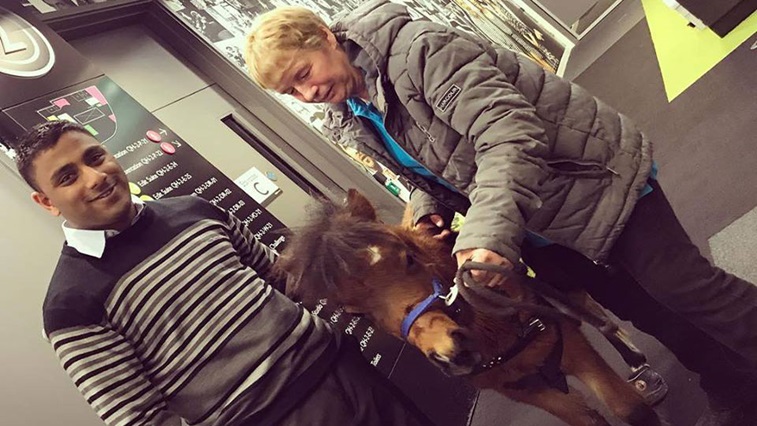 Each morning Katy Smith gets up before the sun rises and heads down to the stables at her Northallerton property to feed her eight American miniature horses.

There she is greeted by Britain's first guide horse-in-training, Digby.

"I have had him since he was first born and when I get up at half past five in the morning, he is the first one who starts the chorus of whinnies," she told OT.

A phobia of dogs has prevented Mr Patel, who has retinitis pigmentosa, from being paired with a guide dog.

Digby and Mr Patel have met three times as the two-and-a-half-foot foal completes his training.

"There is definitely a bond growing between Mohammed and Digby," Ms Smith shared.

"Mohammed is quite a chilled sort of guy. Digby is on that same level. You can see Digby listening to Mohammed's voice when we go out and about around town," she observed.

Ms Smith said that Digby's training involved a range of tasks, including getting used to different floors, heights and curbs, and becoming familiar with zebra crossings.

The South Yorkshire Police's mounted police section has helped with the young horse's desensitisation training, while the staff at Darlington Railway station have allowed Digby to get used to the barriers and different noises at the station.

"Eventually, once he is accustomed to everything, he could go on the train," Ms Smith shared.

She has also been in touch with North Yorkshire MP Rishi Sunak about allowing Digby the same level of access to cafes, shops and other public spaces that is provided to guide dogs.

The unusual assistance animal has been greeted with some surprised reactions while completing his training on the Northallerton High Street, Ms Smith told OT.

"From day one, because he is just the same size as a big dog, people have had the same reaction. They walk past, then they double-take and go 'Oh, it's a horse'," she shared.

"Once they know he is being trained for a specific job, it has all been very positive."

Ms Smith describes Digby as a chatty, bold horse who loves to learn.

"His brain is like a sponge. He knows the difference between when he is going out to the field and when he has his harness on and he is working," she added.

She shared that miniature horses have already been used as assistance animals in the US.

As well as being useful for visually impaired people who have a phobia of dogs, they can help people with specific allergies or who are not able to have an indoors assistance animal.

"If you have had horses in your life and you lose your sight, you might want to carry on that bond or connection," Ms Smith shared.

She told OT that the experience of training Digby had been personally rewarding.

"Helping people and giving them a life that everyone is entitled to is the most rewarding thing," Ms Smith concluded.