The charity has sent the books to mark International Literacy Day 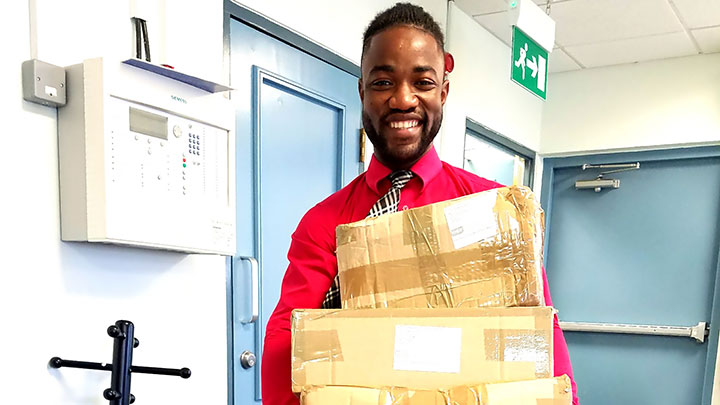 The Royal National Institute of Blind People (RNIB) Scotland has sent 55 boxes of books in braille and giant-print to a school in Jamaica.

The books have been sent to the British Council office in Kingston, Jamaica for distribution to the Salvation Army School for the Blind and Visually Impaired.

The school’s principal, Iyeke Erharuyi, said: “There is a very limited access to books in alternate formats for low vision and totally blind children in Jamaica, so we are very grateful for initiatives such as this. Granting a child with visual impairment an enabling environment means they can break that glass ceiling.”

The school’s need for accessible children’s books was first highlighted by Glasgow city councillor, Graham Campbell, who has previously worked with the British Council in Jamaica. He referred them to RNIB’s Diversity in Sight initiative in Scotland.

RNIB’s Diversity in Sight manager, Gozie Joe Adigwe, explained: “We hope this will help ensure that children in other countries aren’t excluded from the world of literature – a world that can do so much to help shape the person we become.

“I couldn’t imagine being deprived of my favourite stories from childhood. No child should be denied the chance to enjoy the same stories that stretch the imagination and sense of wonder as their sighted peers.”

Mr Erharuyi added: “We would like to thank the British Council, RNIB and Flag Up Scotland Jamaica for this very timely donation, as we will be doing a drive to retro-fit the school library as part of our 90th anniversary.”

RNIB explained that it maintains the largest collection of books for adults and children in Europe with a library of over 21,000 titles in audio, braille and giant-print, lent free of charge to people in the UK with sight loss.

The donation has been made to mark International Literacy Day (8 September), which aims to highlight improvements in world literacy rates and what challenges remain.

British Council country director, Olayinka Jacobs-Bonnick, said: “We are very excited to be able to donate them to the Salvation Army School for the Blind and Visually Impaired as a part of our International Literacy Day celebrations, and to underscore the fact that blind and visually impaired persons do actually read. Equality, diversity and inclusion is a key area of work for the British Council worldwide.”