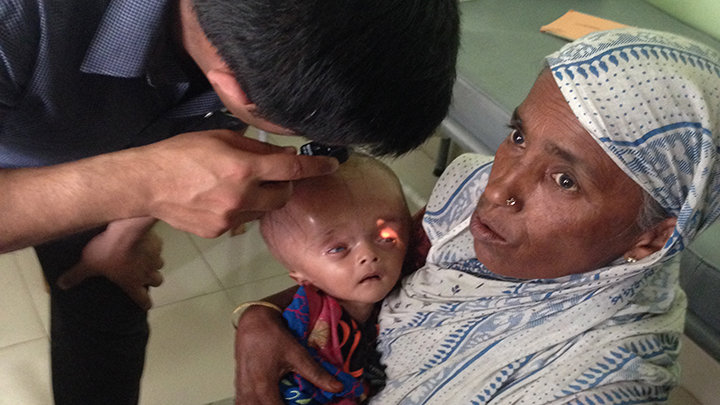 How did you first become involved in the project?

I have always had a desire to volunteer for a Vision Aid Overseas-type project, but due to a variety of factors, I had not been able to fulfil this goal.

Mizanur Rahman, the founder and chairman of the Just Help Foundation, a local charity based in Hyde, approached me to ask for advice and support on the final stages of his dream to build a charitable eye hospital in Bangladesh to help reduce reversible blindness due to cataracts.

He needed advice on equipment, as well as the technical side of eye care services. He explained that, until the hospital was fully built and operational, eye camps were being funded by the Foundation on a periodic basis.

To be honest, I was wary at first – this was a small independent organisation, unlike the larger organisations that carry out such work. However, I was keen to take on the challenge and help out and try to make a difference.

What steps did you take to support the programme?

I decided to help fund a full eye camp, and approached Imtiaz Ahmed, a director at Eyecare Optical Ltd where I work. With his approval and full support, we placed charity collection tins in three of the practices.

I was overwhelmed by the charitable response I got from the patients, as well as support from the staff. Within five weeks we were able to help raise the required total for the next eye camp.

The date of the camp was mid-July 2016, and I flew out to join the camp to help out with refractions and general eye examinations, and to observe the work being carried out by the rest of the team.

How did you find the experience on the ground?

The experience was a real eye-opener. The number of people that attended from far and wide was phenomenal. Around 220 people turned up, and 47 had mature/hyper-mature lens opacities, and visions of HM/CF. Those who were willing to have the operation then were taken to VARD Eye Hospital, where they were all prepared for surgery.

As they waited I could see they were nervous, but they told me how grateful they were for the chance to regain the gift of sight. I found out that a woman who was over 60 years old had travelled approximately 35km to receive the treatment, while an old man said that he had been unable to see his grandchildren born in recent years.

Another woman said that she was made redundant from the tea garden she worked in because of her vision loss, and that she would be able to work again after the operation. It was a heart-warming, humbling feeling, and really put into perspective how lucky we are in the developed world, where we refer patients with 6/12 VAs.

What are the next steps for you and the work of the Foundation?

I am very grateful to have had the opportunity to participate, and I hope to remain involved in this project. I would urge other practitioners to take part in this project or similar projects, large or small – it can make a life-changing difference to deserving lives.

The Just Help Eye Hospital is now in its final phase of building work and is in need of a final push to be a fully functional operation, enabling cataract operations and general eye examinations to take place on site.

The Foundation has been lucky enough to receive equipment including a reconditioned keratometer, an ophthalmoscope, and a trial lens set from Specsavers Opticians, and Keeler UK has donated two new ophthalmoscope and ret sets. However, there is still a need for more help and donations of equipment.

More information on the work of the Foundation is available on its website.