Helping those who served

OT  speaks to the group manager of Blind Veterans UK’s No One Alone campaign, Lara King, about how the initiative is successfully driving referrals

01 Blind Veterans UK launched the No One Alone campaign on October 2012.

As an organisation, we have been established for 101 years and aim to provide dedicated support to blind and visually impaired ex-Service men and women, no matter when they served or how they lost their sight.

It has long been the case that all veterans are welcome, regardless of the cause of their sight loss, yet before we established the campaign, the number of new beneficiaries coming forward had begun to dwindle. We knew that there were a lot more people out there who we could help – in fact, the latest research tells us that there are up to 59,000 blind and visually impaired ex-Service men and women in the UK. With a desire to reach more of these veterans, we established this dedicated campaign.

"Before the No One Alone campaign, the sector simply had a very low awareness of who we are and what we do"

The multifaceted initiative, which combines a range of marketing, PR, stakeholder engagement and advocacy work, has enjoyed much success over the last four years, and the number of veterans that we are delivering support to is now increasing year-on-year as our brand awareness within the eye care sector grows.

02 From Alec Newman and Michael Parkinson, to Philip Schofield and Barbara Windsor, the celebrity endorsements that we have secured have helped the campaign reach a mass audience.

Actor Alec Newman was one of the first celebrities to endorse the No One Alone campaign in March 2013. We had been supporting him in preparing for a role that saw him play a visually impaired gentleman. As a result, Alec linked up with one of our veterans, Billy Baxter, and they appeared on ITV’s Daybreak to talk about the campaign.

It is amazing how much awareness has been raised through the support of these household names – they have the potential to take us to a national audience and put a spotlight on what we are trying to say. However, while these celebrities are well respected and have a high public profile, we do seek people who are relevant to our supporters or cause as well.

03 As part of our advocacy work, we hosted our first Parliamentary event in September 2014, which was attended by over 30 MPs and Peers.

This was a general event with the aim of developing stronger relationships with MPs and the Department of Health so we could reach veterans newly diagnosed as visually impaired. What arose from this was our collaboration with a number of other sight loss charities, including the Royal National Institute of Blind People, to produce an information guide called Sight loss: what we needed to know. It's a guide that everyone in the sight loss sector has worked on together and we are now in conversation with the DoH about how it could be adapted and distributed by the NHS. 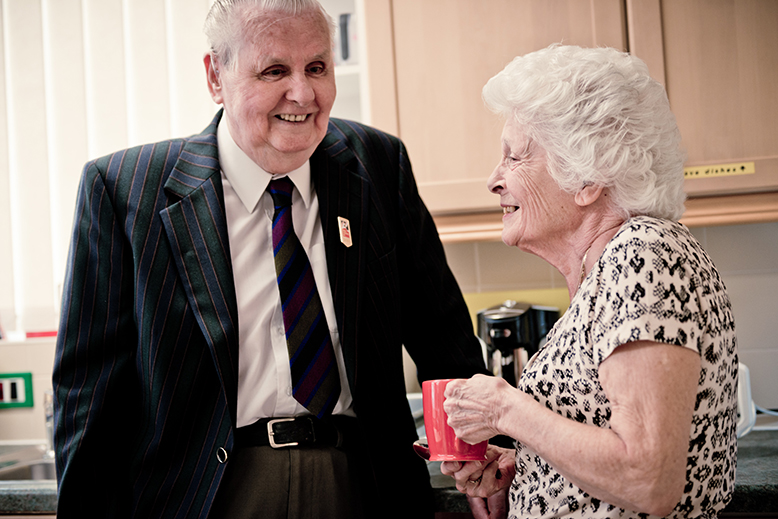 We hosted our second parliamentary event in February this year, with the aim of reaching out to local authorities who have a statutory requirement to contact people at the point they are diagnosed as visually impaired, to encourage them to ask people during this process if they have ever served. Many veterans do not self-identify as such, so it’s really important that all social and health care professional who comes across people with sight loss asks them if they have ever served, including National Service, and then sign post them to us.

Following the event, seven MPs wrote to their local authorities to encourage this referral, which is a really positive step forward. The event has certainly helped our ongoing dialogue with government and local authorities, and we are banging on the right doors.

Our advocacy work is very much about playing the long game, and we are pleased to have some well-known government names working with us, which is a big achievement.

04 We set up a partnership with Action for Blind People in April 2015.

The purpose of the partnership is to raise awareness of each others’ services with our beneficiaries.

Action for Blind People has independent living coordinators on the front line who interact with visually impaired people in the community, and sight loss advisors in the hospital, and they have built it into their process to ask people if they have ever served. If they have, they refer them to Blind Veterans UK.

Similarly, we have taken Action for Blind People's leaflets and distribute them at our three centres in Brighton, Sheffield and Llandudno to raise awareness.

The partnership is all about using the strengths of both charities to reach and support more visually impaired people.

05 Being shortlisted for Campaign of the Year at the Vision Pioneer Awards in June demonstrated just how far we have come in raising awareness of the charity within the eye care sector.

As a charity, we have always been well known within the military sector, but for us, in terms of finding veterans who are eligible, the eye care sector is equally important. I don’t think that we would have been on the awards’ shortlist a few years ago because, before the No One Alone campaign, the sector had a very low awareness who we are and what we do.

Previously, many people thought we were only there to support veterans who had been injured in service, but now we are getting the message out there that it’s for anyone who has ever served, regardless of what caused the sight loss.

To be shortlisted for the award gave us the platform to talk about our work further and it is certainly a sign that we are making good progress. Being shortlisted came at a time when we marked our most successful year to date having recruited 875 new veterans in the last business year. Looking ahead, we want to keep building strong relationships with the eye health sector so we can reach and support even more blind veterans than ever before.