Optometrist and founder of Eyes4Everest, Shaun Chang, speaks about providing eye care to children and adults living near Everest

1. Eyes4Everest was officially established in July 2014 to provide primary eye care to people living in the Everest region of Nepal through volunteer sight-testing missions.

I grew up in New Zealand and as a child I was inspired by Sir Edmund Hillary, the first man to reach the peak of Mount Everest, who would visit my school to talk about the sherpas and his work in the Everest region through the Himalayan Trust.

Having always been motivated by the adventurer, in 2013, following an attempt of the famous Gokyo Ri walk, I visited Khunde Hillary Hospital in the heart of Sargamatha National Park, which was founded by Sir Hillary.

During my visit, I spoke to the hospital’s director who, on learning that I was an optometrist, showed me its limited eye care equipment. It consisted of bags of donated glasses, an old trial lens set with half of the lenses missing and a Nikon vertometer that had been donated to the hospital, but no one knew how to use it.

"I tried that day to teach the staff as much as I could, but I knew that more had to be done – I returned to Australia to form Eyes4Everest"

By the afternoon, I had sorted through the trial lenses and had begun labelling the donated glasses. I tried that day to teach the staff as much as I could, but I knew that more had to be done – I returned to Australia to form Eyes4Everest.

2. The Everest region of Nepal is remote and access to healthcare is limited. Prior to Eyes4Everest's first trip in 2014, there was no primary eye care provider at all.

Returning to Nepal as Eyes4Everest, the team visited the Khunde Hospital where the hospital director explained how local children particularly were suffering academically due to uncorrected refractive error.

During that first trip, we expected to see around 80 children. However, two optometrist volunteers tested the sight of 150 people – 123 of which were children. People came from miles and miles away to have their sight tested, despite it being a national holiday.

Last year, we returned to Everest with a larger team consisting of five optometrists and saw 472 patients, expanding beyond testing children. This year we hope to build on this further still, as at least seven optometrist volunteers make the three-week trip in October.

Since our first trip we have returned annually, alternating visits between the western and eastern region of the Everest National Park. 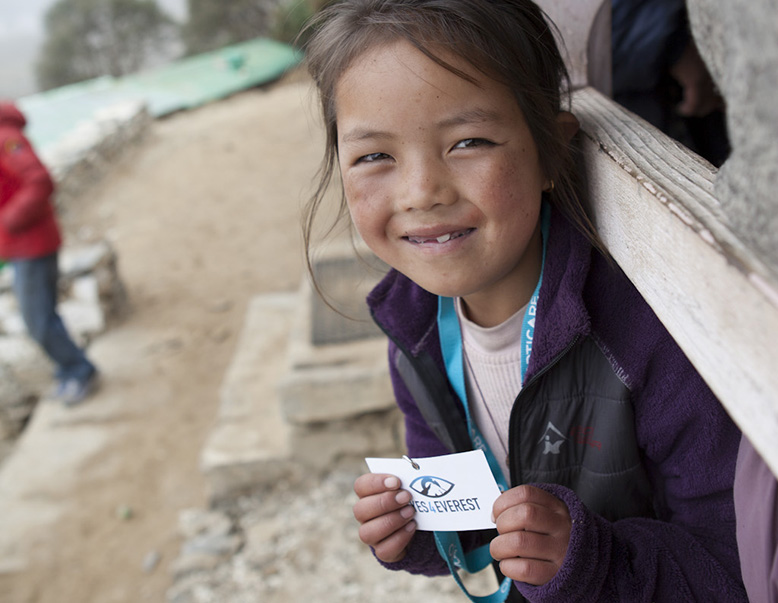 3. We do not simply screen people's vision, but offer a comprehensive eye examination, incorporating retinoscopy, subjective refraction and binocular vision – that's what I do in Australia, so why would I change it for the people of Nepal?

Snow blindness and other UV-related anterior eye pathology is very common in the people we see, so we prescribe sunglasses, as well as spectacles. We also identify people who require further management by an ophthalmologist and refer them.

When we are doing the sight tests, we collect the details of those who require a prescription and take the prescriptions back to Kathmandu where the glasses are made up by a local optometrist who expressed a desire to support the charity.

It costs us $20(AUD)/£11 a frame and sherpa guide then takes the glasses back to the villages when they are ready. This helps to sustain the local optical industry in addition to providing durable, good-quality eyewear.

We are also currently in talks with a Kathmandu-based ophthalmology group in order to establish a sustainable approach of caring for patients from the Everest region.

4. Our goal is to secure a permanent base at a hospital in the South Kathmandu Valley.

In order to achieve this, we must raise $80,000(AUD)/£46,000, which will allow us to buy a 33% share of the hospital located in the Lalitpur region of Kathmandu that services a population of around 200,000 people. If we are successful, it will be the only eye hospital in the region.

The hospital already performs cataract surgery and provides basic refractive services, but I feel like we could enhance its eye care offering extensively by adding binocular vision and contact lens clinics, for example. There is lots of opportunity for growth there for us.

We are hoping that we will have raised enough to secure the hospital by our October trip this year so that we will be in the country to sort out all of the legal processes that come with it.

We would like to continue to run mobile eye clinics in the Everest region, and any profit that we make from the hospital services would hep fund this. Owing to Everest’s mountainous terrain, the travel and transport of sophisticated eye testing equipment is difficult. Therefore, mobile clinics and volunteer missions to reach remote regions are essential.

Looking to the future, I would like to see Eyes4Everest be able to service the whole of the Everest region. My heart is in Everest because of Sir Hillary. However, a lot of people who have joined Eyes4Everest have connections to different parts of Nepal and there’s no reason for us not to expand to these areas in the future.

Visit the Eyes4Everest website to learn more about the charity.