In all the towns in all the world

A new campaign hopes to attract out-of-the-box thinkers to solve the challenge of getting spectacles to the 2.5 billion people who need them 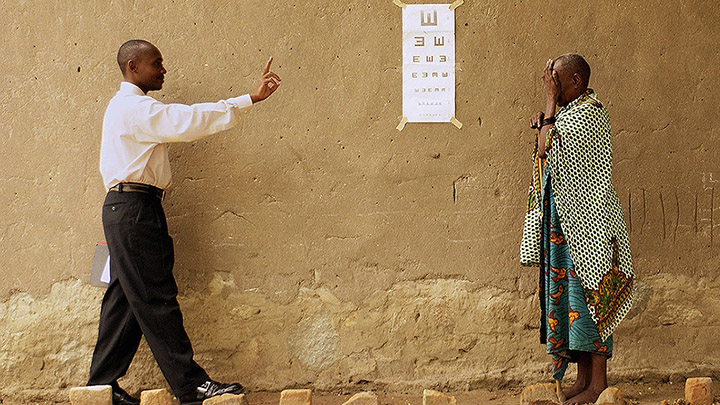 Fresh from a win for Rwandan eye health, philanthropist James Chen is launching a new campaign to tackle the global problem of people who do not have access to refractive error correction.

The Clearly campaign is offering $250,000 in prizes for ideas to transform how vision care is provided in developing nations, alongside a series of problem-solving labs to be held across the world.

The 2.5 billion people worldwide who need but lack spectacles is a problem, Mr Chen told OT, highlighting that he has focused his efforts towards it for over a decade.

After seeing the potential of adjustable spectacles in the early-stage Adlens technology, he founded charity Vision for a Nation. The group have been working with the Rwandan government since 2009 to build locally accessible eye care services throughout the country.

Mr Chen, a co-owner of Adlens, explained: “When we started in Rwanda we had no idea if we could put together something that could help the average person in Rwanda to see clearly. People were saying, ‘No, no, no, it can’t be done’ but five years later, it’s done … Now any Rwandan citizen who has something wrong with their eyes has access to the national clinic system, 502 clinics, and 2000 trained nurses.

“That’s the first time, as far as I know, in the history of a developing-world country where everyone in the country now has access to a primary eye care service,” he emphasised.

The trained nurses can treat people with minor eye conditions, offer a pair of £1 spectacles or refer people with more serious conditions to a doctor, Mr Chen highlighted.

But, unlike Rwanda, many other developing countries do not have a national health service already in place. “And it’s still something that is quite expensive and challenging to do, because you have these trained nurses,” he said.

The launch of Clearly is in response to these issues. But another eye health development has also caught Mr Chen’s eye – the Peek Vision smartphone eye examination system.

“My take on this was that it was the key to surmount the problem of doing basic eye screening.”

The one-year Clearly campaign, with the seven-figure sum funded by the Chen family, is calling for experts to get involved and find a solution that will enable eye services to reach people even in the most remote corners of the world – within a lifetime.

“The objectives are to raise awareness in the outside world about this issue … and trying to bring people from outside of the industry to focus on this issue. When you throw a bunch of smart people together, out-of-the-box thinkers and creative types, they will figure out things that we wouldn’t necessarily see,” he said.

People with a mind for logistics – or businesses with global delivery networks already in place – could provide invaluable insight, Mr Chen emphasised.

“When you link this to the issue of road traffic safety, for a business with so many drivers … it becomes a corporate responsibility,” he explained.

But optometrists with expertise in the area are still vital, he said, adding: “We’re hoping the profession will rally behind the campaign.”

The Clearly Vision Prize is now open, and closes on 7 July. The first Clearly lab was held in Austin, Texas, in April and the next will be held in Hong Kong on 25 May, with others to follow.