Two brothers ran the London Marathon last month as a homage to their great uncle, Professor Norman Ashton CBE, the founder of Fight for Sight 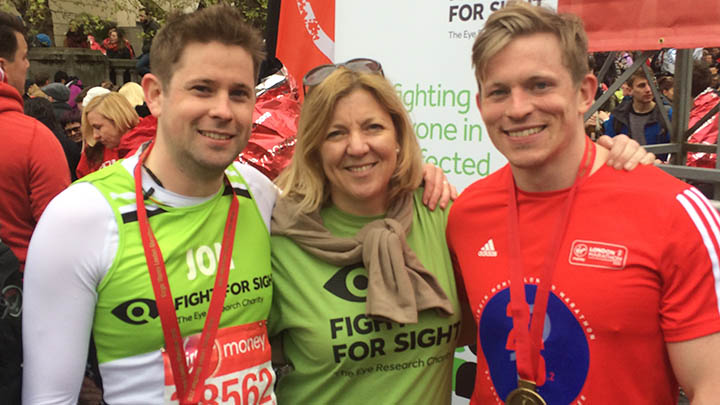 The inspirational legacy of a world leader in eye research and the founder of Fight for Sight lives on in his two great nephews, who ran the London Marathon last month (24 April) to raise money for the charity.

Brothers Jon and Robert Bennett ran the marathon together step by step, both crossing the finish line after a toiling four hours and 27 minutes.

The brothers ran for Fight for Sight, a leading UK charity that funds eye research to prevent sight loss and treat eye disease, which was founded in 1965 by their great uncle, the late Professor Norman Ashton CBE.

As well as founding the charity, Professor Ashton published over 200 papers and trained numerous ophthalmic pathologists. His greatest breakthrough is considered to be his 1953 discovery that excessive oxygen given to premature babies can cause blindness.

Robert, who lives in Jersey and works for an investment agency, said: “Our great uncle was an incredible man and we’re proud of his achievements and how his life-long work helped to save people’s sight. Fight for Sight continues to fund vital eye research across the country, so I am proud to have run with my brother to help raise both awareness and sponsorship.”

Jon, an engineer who lives in Gloucestershire, added: “We ran the whole course together and it certainly helped keep us both going at times. It was hard work yet enormously satisfying and we were blown away by the incredible support all the way round the course – from family, friends, Fight for Sight, and the general public shouting encouragement. It really does help to push you along.”

You can still sponsor the Bennett brothers and Fight for Sight by visiting John or Robert’s JustGiving pages.