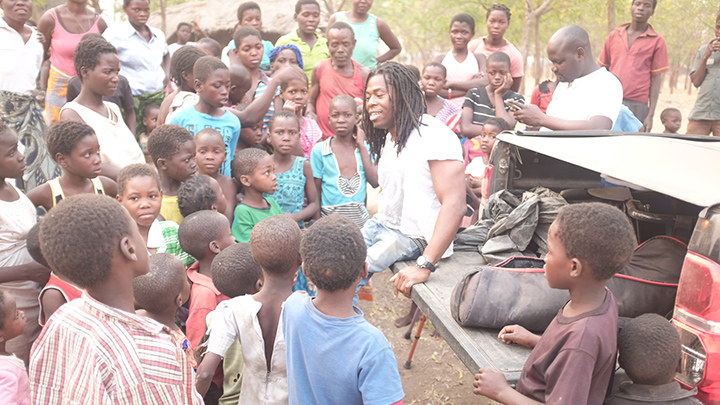 A short video which follows the story of a 14-year-old girl from Malawi, Rose, who was almost completely blind due to cataracts has received more than five million views after being posted on Channel 4 News’ Facebook page.

Rose’s story was filmed for an episode of Unreported World: Fight for Sight, which aired on Channel 4 in October. TV presenter Ade Adepitan met Rose as she had an eye examination and prepared to undergo surgery to remove her cataracts and get her sight back. He also met ophthalmic clinical officer Rex Bwana-Usi, who performed eye examinations on the teenager.

Prior to the surgery, Rose had had no vision since she was a baby. She was desperate to be like a “normal” teenager and to go to school with her friends and learn to read and write. However, this remained unlikely until a Sightsavers outreach clinic visited the area of Malawi where she lives.

Taken to the clinic by her stepfather, Rose’s eyes were examined by Mr Bwana-Usi.

Blogging about the experience of watching Mr Bwana-Usi work, Mr Adepitan wrote: “We found out about the many mind-boggling challenges he has to deal with just to get to these patients. Reaching his patients is only half the battle because Rex then has to try and get them to hospital for treatment. He has to do all of this even though his department doesn’t have an ambulance. To me his job seemed like an impossible mission.”

Speaking on BBC Radio 5 Live’s Hit List programme on 6 December, Sightsavers CEO, Caroline Harper, said: “We are so excited to see the video do so well. Rose’s story is so poignant. When you see the end part of the video and she looks in the mirror and sees herself for the very first time, and laughs, makes me well up every time. The impact on her life is phenomenal.”

Ms Harper added: “I hope people will watch the video and want to get involved. At the moment, we are in the great position whereby for every donation we receive, the government will double that until 15 December, and we will be able to reach even more people with visual impairments, train more doctors and provide more equipment.”