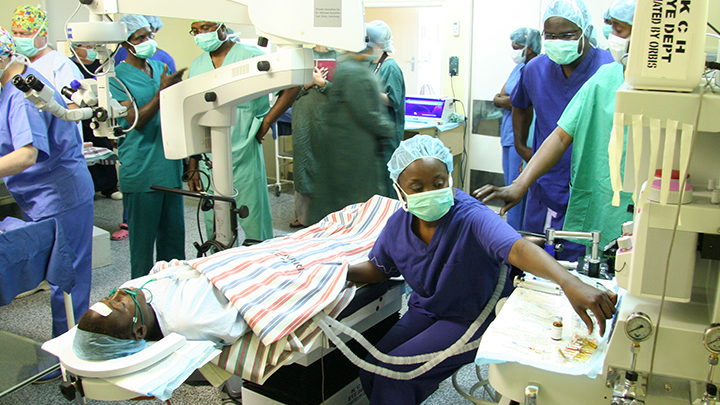 Orbis has launched a three-month campaign to raise funds for the expansion of its work in Zambia, which aims to prevent and treat childhood blindness. Director of external relations at Orbis, Allan Thompson, shares the eye care charity’s six key moments in Zambia

01 Orbis started working in Zambia, a country where 78% of its population lives in poverty, in 2011.

Tragically, the country has one of the highest rates of childhood blindness globally.

Since entering Zambia four years ago, Orbis has been working in partnership with the country’s Ministry of Health to establish a centre for paediatric eye care.

Based in Kitwe Central Hospital, the Kitwe Eye Annexe is the first of its kind in the country, and over the last three years has carried out surgeries on around 1,000 children with cataract and other complex eye conditions.

02 Launched on 4 November 2015, Vision for Zambia marks phase two of Orbis’ programme in the country, which aims to establish a sustainable system for the vision screening, diagnosis and subsequent treatment of children with sight impairment.

Focused on the Copperbelt region of northern Zambia, which is one of the country’s most highly populated provinces, Orbis will seek to support the establishment of primary and secondary eye care services. We will train local community eye health workers and primary health workers in basic eye care. The more complicated cases will then be referred through to either secondary eye care centres or the Kitwe Eye Annexe if needed.

Primary healthcare workers performing the screening in the Copperbelt region will pilot a mobile app called Vula, which will enable users to take images of a patient’s eye to send to an ophthalmic clinical officer for advice.

03 The campaign has secured match funding from the Department for International Development (DFID), which will match donations made by the UK public during the three-month campaign.

We hope that the UK public will find it an exciting appeal to support.

Over the coming months, Orbis will raise the profile of the campaign through advertising and leaflets in the press which highlight the stories of the children in Zambia [we] support. We’re also working with partners, such as Searcys and Sock Shop, who are supporting our appeal in store and online.


04 Alongside the campaign, Orbis has launched a microsite, www.visionforzambia.org

We are asking 5,000 people to sign up to the website to learn more about the campaign. In doing so, one of our generous donors will donate £1 for every person who signs up. With DFID’s match funding, this activity alone could generate £10,000 which would be used for phase two of our programme in Zambia.

05 Educating people living within the Copperbelt region about eye diseases and eye care will be key to phase two of Orbis’ programme in Zambia.

Through previous experience, we know that the best way to get information out to people living in rural communities is through radio and community films. In the early stages of phase two, we will be hosting a series of community film events where we will air a film about childhood blindness and cataracts.

The film will be screened in villages across the region and traditional healers, who are normally people’s first port of call, will be invited. Ophthalmic nurses will be on hand during the events to perform screening and discuss eye care with people who attend.

It’s a chance to show this film and for people to talk about childhood blindness and how to identify it. We keep hearing stories about children who develop cataracts at a young age, but are told by family members that it will go away so they don’t seek treatment. This is about encouraging them to seek help and speaking to them about the high quality service we have created at Kitwe.

06 Following the end of the campaign, Orbis aims to put its plans into action over a three-year period from June 2016.

Success in phase two is screening the vision of tens of thousands of children, and diagnosing and treating eye conditions when necessary. Above and beyond that, we would like to have established a paediatric eye care system, run by the Zambian Ministry of Health, that is sustainable. Success would also be that we could expand the programme outwards to work in more provinces in Zambia.