My dad was a boxer when he was younger. When I was three, he got me a punch ball. My dad didn’t think much about it – it was just something for if I was bored. When I was 10 years old, I had my first fight. From there, I have never looked back. I’ve won four English titles; I have won a Great Britain title and I have represented England within international tournaments.

I have never been pushed into boxing, although my dad got me into it. I have found a love for it. For people who don’t know, boxing just seems like a punch up, but I don’t think of it like that. Boxing is a tough sport, but I see it more as an art form.

I look up to Muhammad Ali. Although he was criticised at the time, after he retired and even now, people look up to him because of the way he was inside and outside of the ring. His style was so different to all the others from that time period. A lot of people doubted him, but he never had any doubt in himself.

I do get nervous, but I feel that the nerves help me to perform better because I am more alert. Once I am in the ring I am alright – it is just the build up to the fight. When you are in the ring, you block out the crowd because of the adrenalin.

I can judge the distance and be more confident in my boxing. I don’t have the risk of a contact lens falling out or sweat irritating my eyes

I have been wearing Eyedream ortho-k lenses for about eight months. It is amazing. I only wear them at night so when I go out, I am just like anyone who doesn’t wear contact lenses or glasses. It is a real game changer.

I can judge the distance and be more confident in my boxing. Ortho-k gives me the ability to do what I want and to box at close, mid and long range comfortably. I don’t have the risk of a contact lens falling out or sweat irritating my eyes.

My optician, Simon [Mann, from Daybell and Choo, part of Hakim Group], has helped me so much with them. He has been patient and worked hard to make sure that I am getting the best experience for my boxing and life in general. 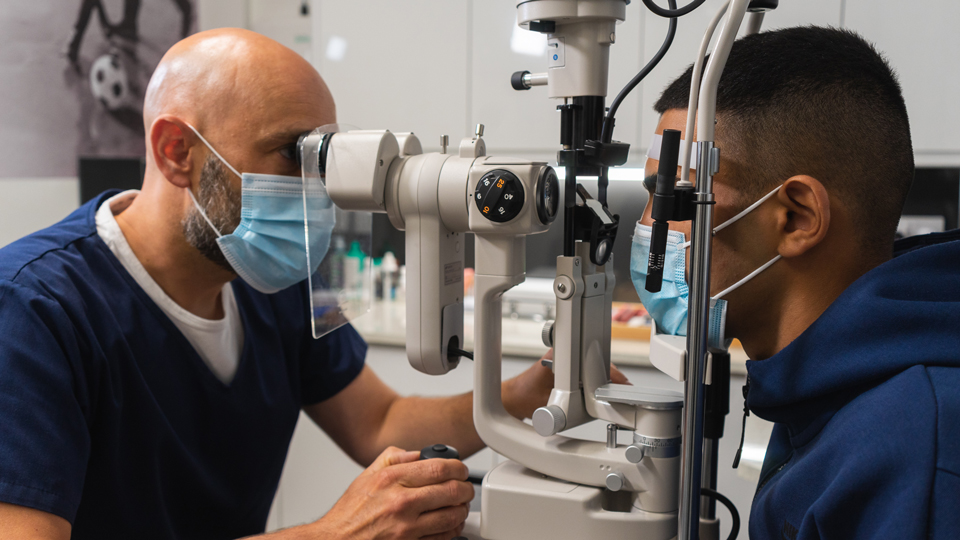 Hakim Group
Boxer, Khalid Ayub, has his eyes checked by optometrist, Simon Mann.
My ultimate goal is to become a world champion. I work hard; I am dedicated and disciplined. Everything I do is focused on boxing. With every training session I put my all into it because I believe that’s the attitude you have to have to get to the top.

My biggest role model apart from Muhammad Ali would be my dad. We are always together when it comes to boxing. Without him I wouldn’t have started boxing. Everything that I have done is because of him. I always listen to my dad and take in what he says. My parents do worry, but they know that I put everything into training. From their perspective, they know that I have done the preparation before I go in the ring.