“My first few years were spent wearing a white coat” 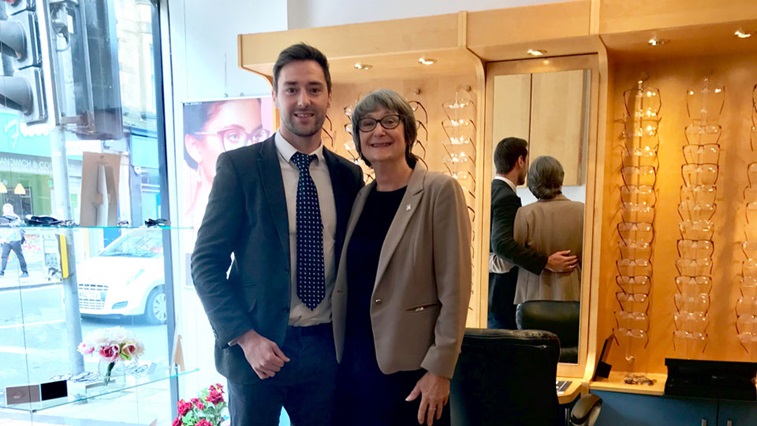 Congratulations on your retirement, what are you looking forward to the most?

Alison Coates (AC): I know that I will miss providing a service to clients, but I am looking forward to enjoying spontaneous travel, my garden, many hobbies and family. I’m also looking forward to not having to travel in rush hour each day.

How long have you worked in the optical profession?

AC: I followed my father who was an optometrist in Penrith. I started at Hudson Verity in Leeds on 22 August 1966, which was the place where my father had worked. I moved to London in January 1970 and was based in Putney at Dollond & Aitchison. I moved to be the manager of Beauchamp Place in Knightsbridge where Moorfields surgeons gave clinics. The Chelsea Pensioners were always brought in wearing their red jackets. I later moved to Nottingham where I managed a Co-op optical branch, but three years later moved to Yorkshire and took over the running of Dollond & Aitchison in Burnley. I left in December 1978 to have children and didn’t return to work until March 1985. I managed the Livingston branch of Dollond & Aitchison but was made redundant when they closed the practice in November 1990. In February 1991, Norville rang me to say that A I Rifkind needed someone, and Rifkind & Brophy Optometrists in Morningside became my second home for 28 years. People I have dispensed to include Alan Whicker, Ronnie Corbett, the Bee Gees, Frank Finlay, John Smith and the locals of Morningside.

What has been the biggest change that has influenced the way you practise?

AC: Technology has to be the biggest change. We now have an immense range available to provide accurate information concerning every aspect of our clients’ needs. My first few years were spent wearing a white coat. Glass lenses were one shilling and 10 pence. Waiting for new spectacles took a little longer but most of our work was sourced in the UK.

People I have dispensed to include Alan Whicker, Ronnie Corbett, the Bee Gees, Frank Finlay, John Smith and the locals of Morningside

What have you learned from working with the team at Rifkind & Brophy Optometrists?

AC: Working so long at Rifkind & Brophy Optometrists has been a joy. We may just be a small independent, but it has always allowed us to give the utmost personal service to people we genuinely care about. Having staff, who all have been with us for many years, means that an excellent team spirit exists. Loyalty, trust, dependability and lots of laughter only adds to the true enjoyment of what I have had during my long career in optics.

How has Ms Coates supported you in your role?

Ben Wilkinson (BW): I have had the pleasure of working with Alison for just over five years.

Alison has helped immensely with many aspects of Rifkind & Brophy including dispensing, ordering, adjustments and even sorting the accounts. This has allowed me to concentrate on clinical matters and has made my transition from optometrist to director run more smoothly.

What have you learned from Ms Coates?

BW: Alison has brought a wealth of experience and has taught me a lot. She really goes above and beyond for each patient and will offer individual care and attention to everyone. She really has taught me how things are to be done working within a great team at a great independent.

What is the one thing that Ms Coates brings to the practice team that will be missed?

BW: Alison’s dedication and attention to detail in general will be irreplaceable. She will be sorely missed. She has been the go-to person for dispensing, adjustments and all things glasses in Morningside for 28 years. We all wish her all the best in her retirement and would like to thank her for her great work over that time.