Newly-qualified optometrist, Nikki Sharma, discusses the benefits of the volk lens in the testing room 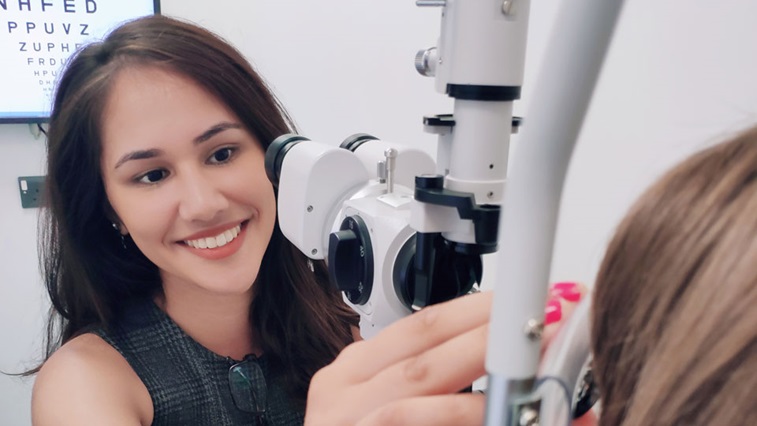 In just over a year in practice, I have quickly found that a tool that I cannot live without is my volk lens. The volk lens is of paramount importance when carrying out a technique that is clinically known as slit lamp binocular indirect ophthalmoscopy (BIO). However, many of us simply refer to this procedure as ‘volk’ due to the popularity of these biomicroscopy lenses that are produced by Volk Optical.

Like most optometrists, I was first introduced to the concept of volk at university.

I initially found several aspects of using the lens quite challenging. This included maintaining a steady working distance, correctly positioning my arm and getting a good view of the back of the eye.

Whilst undertaking my pre-reg, I increasingly noticed my reliance on volk. For example, when carrying out direct ophthalmoscopy on patients who were highly myopic was difficult as the image was extremely magnified and, in some cases, distorted. Not only did this limit my view of the periphery, but was also distressing for the patients who found it difficult to fixate in the distance due to their prescription. In these types of cases, volk offered the perfect solution. Not only was it more comfortable for both parties, but the image achieved was clearer and had a greater field of view.

When pathology is suspected, the use of a volk lens is unquestionable

When pathology is suspected, the use of a volk lens is unquestionable. The variable magnifications, and therefore field of view, offered with this technique can aid in detecting suspicious lesions that may be out of reach with a direct ophthalmoscope. It generally allows a more detailed view of what is seen (ie the presence of fluid, subtle colour changes, size). The information you can gather not only helps to form the basis of a hospital eye service (HES) referral letter, but also assists in distinguishing between malignant and benign conditions.

There are times in practice when I come across patients where the view of the fundus is limited due to small pupils or lens opacities. Sometimes these patients are not suitable for dilation for a number of reasons, such as narrow angles, high intraocular pressures, resistance to eye drops and previous adverse reactions. In many cases, rather than referring them into the HES for further examination straightaway, I take responsibility for the patient’s care and use my volk lens to make a clinical judgement.

Some might argue that it is easier to undertake retinal examinations with a direct ophthalmoscope when patients have small pupils, but I have found that by having a wide range of lenses available in practice, small pupils and media opacities are less problematic with volk lenses. While my go-to lens is the Superfield, I find that for these challenging patients a 90D works better, giving me a good overview of the optic nerve, macula and the entire posterior pole despite these factors.

Since I have mastered the art of using the lens, through many hours of practising, I have never looked back

Volk is recognised as a key skill by the College of Optometrists. As well as being a component tested in universities and during the pre-reg year, it is a compulsory station which must be passed in the final Objective Structured Clinical Examinations.

After speaking to my fellow practitioners about volk, a common theme is definitely present. Volk is not a technique that is straightforward and easily attained. Instead, it is part of a learning curve, where skills need to be honed with constant practice. I would encourage practitioners not to be disheartened if you are not able to achieve a retinal image straightaway. I would advise those learning volk to practice the technique alongside their usual routine, taking advantage of patients with large pupils. Since I have mastered the art of using the lens, through many hours of practising, I have never looked back.