“It was almost like flies or ants running across my eyes”

Optometrist at Carolyn Parker Optometrists, which is part of the Hakim Group, Katie Devey, and her patient, Jo Stokes, discuss a last minute sight test before going on holiday 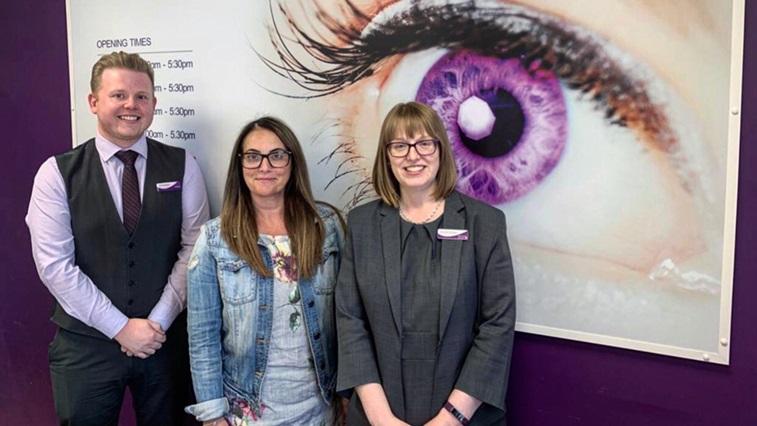 Jo Stokes (JS): I was seeing floaters in my eyes for some time. I can only describe it like flies or ants running across my eyes. It had got much worse as time went on. It was almost like a mouse was going across it every time I moved; it was bizarre. It was a fluke that I was even seen by Carolyn Parker Optometrists that day. I was due to go on holiday to Turkey and I wasn’t going to get the floaters checked. I happened to bump into the practice’s assistant manager, Jim Michie, on the street and when I described the floaters to him, he believed it was something serious, so he organised an appointment straight away.

What did the optometrist find and how did they explain the next steps to you?

JS: After using eye drops to dilate the back of my eye, Katie told me not to be alarmed but there was something that was not quite right. She believed I had a detached retina in my left eye and was referred me to New Cross Hospital in Wolverhampton. She reassured me that they were experts in this and they would be in touch. They rang the next day.

JS: I had a torn retina 12 years ago, so I was hoping it wouldn’t be as painful as that. But in reality, this has been just as tough as it has been a longer process and a long recovery. I mostly felt stopped in my tracks.

Did have to undergo further treatment and what has been the outcome?

JS: I had an operation to repair the torn retina at New Cross Hospital a few days later. I was told by the surgeon that I had two choices: have the operation or go blind in my left eye. I was actually awake for the procedure. As it was an emergency operation and I’d already eaten that day, I couldn’t have anaesthetic. It was a successful operation and I’ve had no after effects, but the only downside is that I will have to have cataracts operation in a few years. But that’s nothing compared to losing my sight, which is what could have happened.

JS: Absolutely. I have my own business and I’ve had a lot of customers come in and ask how I’ve been. A few have said they were also experiencing floaters. Obviously, it doesn’t always mean they have a detached retina, but I’ve told them all to get it checked to be safe. So hopefully I’ve made more people aware of the importance of a check-up.

JS: It’s definitely slowed me down and stopped me in my tracks as I was in the middle of renovating our house while running my own business. But I think it might have been needed anyway. I was doing everything in one go and it’s allowed me to calm down as I’ve had to rest in the recuperation period. I’m considering things more carefully now.

I might be more prone to having another detached retina and I have to have a cataracts operation, but it could have been so much worse. The consultant said that if I hadn’t seen Jim that day and went on that holiday, I would have lost sight in my eye due to the pressure from the plane. But everything’s gone back to normal now. I’m 50 next year and hoping to organise a holiday every month of the year in 2020, so that’s something I’m very much looking forward to.

Katie Devey (KD): I actually saw Jo through the MECS scheme. Reception staff had already triaged her symptoms and correctly identified that she needed to be seen within 24 hours. When Jo began to describe her floaters to me, I realised that they didn't sound like the typical ones you hear patients talk about every day. I knew that I needed to dilate her to get a better view. I used both tropicamide and phenylephrine eye drops to maximise pupil dilation and immediately saw the tobacco dust with the slit lamp. Volk examination then revealed a superior-temporal detachment with the macula still attached.

KD: I explained to Jo that I was concerned that part of her retina had become detached and that I wanted to refer her to see a specialist as soon as possible before it got any worse.

KD: I immediately rang our local ophthalmology acute referral centre at New Cross Hospital in Wolverhampton and explained my findings. I faxed the referral direct to them and they said they would contact Jo and arrange an appointment straight away.

When Jo began to describe her floaters to me, I realised that they didn't sound like the typical ones you hear patients talk about every day

KD: I always ask my patients to let me know how they get on and Jo rang the practice the next day to say she had been seen and listed for surgery. She even popped in a day or so afterwards to tell us how it went. As an independent practice, we really value the relationships we have with our patients and this situation was no different. Thankfully Jo is on the road to recovery and we’re happy we could help in referring her to hospital.

KD: 1. In this case, I tried to highlight where the detachment was and whether the macula was on or off so that the ophthalmologist triaging the referral could see how urgent it was and act accordingly

2. I also found that ringing ahead so the hospital team knew to expect the referral was helpful and meant that I could reassure the patient that they would be contacted the same day

3. As an optometrist we are always actively looking for these conditions and it is reassuring to know that, when they are found, the referral pathways are in place so that prompt treatment can be given.