To the edge and back

TV producer Vanessa Potter lost her vision and mobility over a period of 72 hours from a rare illness. She shares her path to recovery with OT 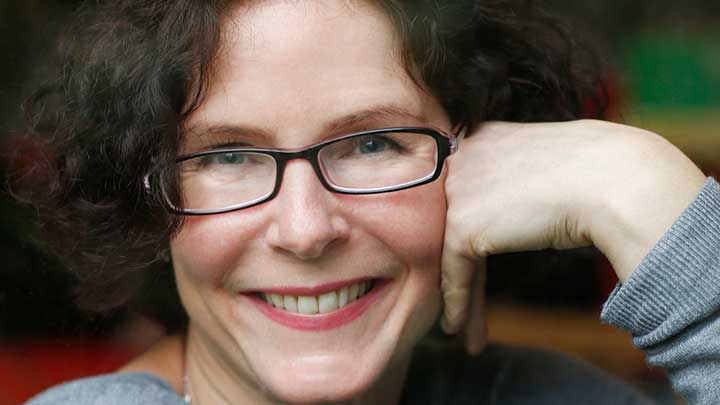 The illness hit me like a high-speed train. The first morning I woke up feeling a bit dizzy. My vision was still operational but I felt very strange. It was like there was static in front of everything. I went to the accident and emergency department but they sent me home because they couldn’t find anything wrong.

The second day was my daughter’s birthday. That morning I woke up and felt like I was instantly wearing sunglasses. Everything had gone very, very dark. I knew that there was something significantly wrong.

I was whizzed off to hospital and over the course of the next 48 hours I watched my own sight melt away. I was looking at hospital noticeboards, reading a letter, an hour later I could just about make that same letter out and then another hour after that it was gone.

I remember realising my vision had gone completely when I was taken in a wheelchair outside. I felt the bright sunshine on my face but I had absolutely no light perception. By that time, I was paralysed.

I was in hospital for 16 days. My sight began to return from absolute nothing. I opened my eyes to this swirling dark mist with the tiniest amount of light. Slowly, bit by bit, I started to get some silvery lines appearing. It was the building blocks of vision. Colour began to appear, lines started to appear, contrast kicked in. It was like my visual system was knitting back together.

It took me a year to recover. I have partial sight now with visual snow which is like looking through a piece of muslin. I also have profound colour loss meaning that I struggle to see contrast within colour. A forest of trees are all the same green for me.

My children and husband are very helpful. It was foggy the other day so my husband rang me up and said, “It is genuinely foggy.” I have to know that everyone else sees it too because that was my first symptom.

From the very first day, I recorded my experiences on an MP3 player. That’s how I was able to write my book, Patient H69, in such detail. As a TV producer, I thought everyone would do that. I’m a storyteller and I sensed a story happening, except it was in me.

It was a horrific, terrifying and unsettling time but there is also this very deep curiosity that went alongside it to understand what was going on inside my brain. After a few weeks, the hospital gave me their best guess at a diagnosis – neuromyelitis optica spectrum disorder, a very rare neurological illness.

Farah Gatrad, AOP clinical and regulatory officer said: “This case highlights that vision can change at any time in your life and while conditions such as this are rare, if something doesn’t feel quite right it is important to visit your optometrist who can offer advice, or direct you to the appropriate healthcare professional. Your optometrist is also ideally placed to help patients make the most of their remaining sight and can advise on the most suitable low vision aids.”

A series of patient leaflets are available on the AOP website.

As my sight was returning, there were a lot of blue recycling bins in my area. When I saw them, I knew they were blue but the surface had an effervescent shimmer all over it. I was looking at this thing and thinking ‘Holy moly, what is that?’

It was my instinct to go up to the bin and use another sense – I touched it. By touching it, that dampened the visual message and it went a normal flat blue. It worked on an auditory level as well. I could say the word blue and it would take away the sparkle.

My synaesthesia lasted for about two months and then it slowly faded away. It was a peculiar thing because I kind of missed it. At the time, I felt that synaesthesia was positive because it was my senses and my visual system trying to process the world.

What I have learned through the experience is that you can’t stop the rubbish thing happening in your life but you can choose how you respond to it. You can also choose whether you let it define you or not. It is amazing what you find you’ve got inside you when you need it.