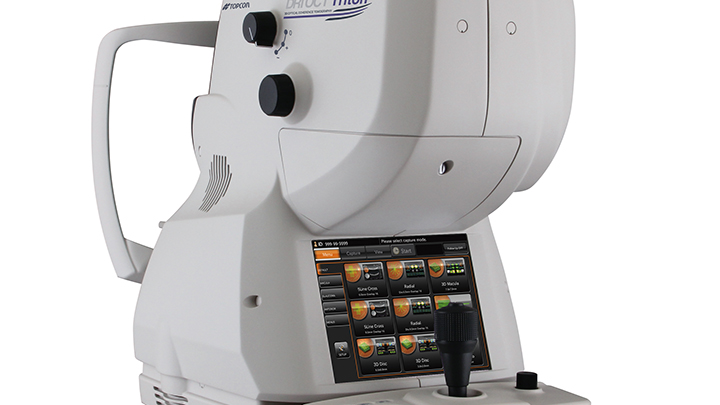 Having been released onto the market earlier this year, little is widely known about the capability or the components of Topcon’s newest OCT with Swept Source innovation

I must admit that when it arrived at the independent practice where I work, I found it quite overwhelming to learn how to use the device. And now, even after two months of exposure and hours of training, I’m still learning how to utilise some of its features to the best of its ability.

I’ve worked with a number of different optical coherence topography (OCT) devices during my almost two years in practice, and it’s amazing how the Topcon Triton has improved upon the little snags of other devices. Its invisible infrared scanner means that patients are not as easily distracted by the scanning line as it works its magic, while the scan also penetrates further into structures of the eye, such as the choroid, than ever before. It’s also quite impressive how naevi can be seen in both depth and width.

The scan’s resolution even allows new unseen vitreous structures and vitreo-retinal interactions to appear, which always provides an amazed patient reaction after discussing their floaters on screen.

A new feature to the device that provides great benefit is a memorised same position re-measurement at a later date, which allows the practitioner to follow up on any changes that may occur.

Using the Topcon Triton, patients with both suspicious discs and macula changes no longer need two separate scans, but can now benefit from a wide scan, with both structures of the eyes analysed for thickness and relative changes. This is brilliant for patients who cannot tolerate numerous bright flashes, and saves space by having less pictures on file. Comparative features allow not only comparison to the previous scan results, but also a full trend analysis that, with the right software, can be viewed anywhere remotely.

What’s even better is that since using this OCT, I am still yet to find a patient whom I would usually dilate for good imaging but still requires drops with this machine.

Sometimes, a good OCT scan can show the practitioner the unexpected and keep them on their toes. When the practice first received this OCT, I did a practise scan on a colleague and, although previous sight tests and fundus photos showed a flat and healthy macula, we picked up two longstanding asymptomatic posterior epithelial detachments (PEDs). Luckily the PEDs were small and did not need treatment, but it did spark a lot of internal research and debate. Therefore, if I’m ever in doubt about any anterior or posterior structure, or cannot see through a dense cataract, I know I can rely on the Topcon Triton OCT to help me out.