What was your first experience of optics?

It was probably being interviewed by Mr Walton, who was head of the Northampton College of Advanced Technology, for a place on the ophthalmic optics course. I was later accepted and enrolled in 1963.

I applied because when I left the Navy after two years of service, I was at a bit of a loose end as to what to do. A friend’s father was an optometrist and over dinner one evening he told me about optometry and how it was a great profession to work in because, when you help people, you see the positive difference that you have made to someone’s life immediately.

Was optics for you from the start?

Ophthalmic optics wasn’t, and after the first year I transferred onto the dispensing course. The medical side of the profession, being in a dark room testing eyes, just wasn’t my cup of tea.

What was your journey after qualification?

My first job in optics was during university when I spent Saturdays working at Dollond & Aitchison in Holloway, London. I continued to work there once qualified, balancing it with the odd day dispensing in Selfridges.

After a few years, I decided that I wanted to travel, and subsequently secured a job as a lab manager in Denmark with the American Optical Company. My employer then offered me a position as project manager setting up laboratories across south east Asia. During this time, I set up surfacing labs in Singapore, Indonesia, Bangkok and Hong Kong.

After two years, I was asked to relocate back to England to organise the John and Robert Fleming group of labs, which had been founded by the brothers of Alexander Fleming, who invented penicillin. They had 22 labs in the UK and my job was to modernise them.

In 1976 I relocated once more, this time to Switzerland, where I was managing a laboratory that was making American Optical Company A07 varifocal lenses. However, by 1978, my children were of school age, and I decided that it was time to stop travelling and I returned to the UK to be a dispensing optician.

"I had also grown increasingly frustrated by the frequency that I would phone a manufacturer to purchase a frame that I had spent a long time working with a client to pick, and it would be sold out"

In 1979 I opened an opticians – Roope & Katz Ltd – in St Albans, in partnership with optometrist Stewart Katz. After a year, I took on the business as sole owner, and today the practice operates as Black Eyewear.

Why did you establish Black Eyewear?

I established Black Eyewear unofficially around a decade ago because I was a bit fed up with the frame designs that were around. I had also grown increasingly frustrated by how often I would phone a manufacturer to purchase a frame that I had spent a long time working with a client to pick, and it would be sold out. This happened so often with black frames that I decided to design six frames in black myself and have them produced.

As a life long jazz fan, I decided to dedicate the collection to the Jazz Greats of the 1950’s, the same decade that had provided inspiration for the style of Black Eyewear.

It was certainly business as usual for the practice until one day in 2005 when a big, burley biker pulled up on a motorbike outside of the shop, came in and said ‘I’ve come to see those Black Eyewear frames of yours.’ He had come all the way from Belgium for my frames and I couldn’t believe it.

Realising the potential I had to create a brand, I began to focus on the frames side of the business and designed 10 more frames. I have continued to build the collection this way every year since.

How has the company developed over the last few years?

As the Black Eyewear brand grew, an increasing number of people travelled to St Albans to see us – so much so that, in 2012, I decided to open a pop-up shop in London’s Goodge Street. It has been really successful and has been there four years now.

Within months of moving into Goodge Street, we had doubled the business and remain there today.

There are now 106 frames in the Black Eyewear collection, with 13 new models due out in January. I introduce around 10 new models a year, but we are not replacing the old, just adding to the collection. 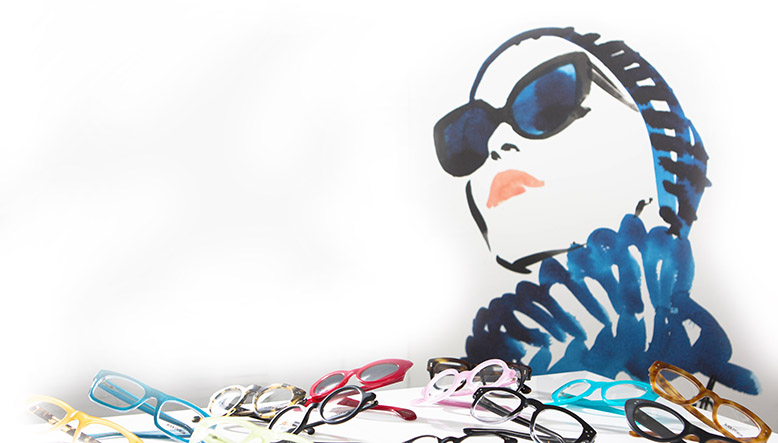 What is the most rewarding aspect of your job?

It has to be designing eyewear and receiving really great feedback from those you have supplied them to. For people to come in and say how much they like my designs and want to own a pair is an amazing feeling.

What’s been your career highlight to date?

Two years ago, Black Eyewear was recognised as part of Selfridges’ Bright Old Things campaign. Every year the department store searches the country to discover fresh, young designers and gives them a window on Oxford Street to show their creations.

While this initiative is traditionally known as Bright Young Things, in 2014 Selfridges focused on Bright Old Things. I was selected as a ‘Bright Old Thing’ and Black Eyewear featured in a Selfridges window and was sold in the store for around three months.

Another highlight has been the discovery that I’ve become quite well known – I have designed and produced frames for a range of great jazz musicians and have become known in the jazz industry as the ‘Bop-tician.’

What does the next step in your career look like?

As far as the business is concerned, we are enjoying it and would certainly like to expand if we can.

As the pop-up has worked so well, we are now looking across the country at other locations. While it is still in the research phase, Leeds, Manchester, and Bristol are possibilities. However, nothing is concrete yet.