“We talk about preventative measures, which is key to protecting the eyes of the future”

My priority: Balancing business with a new baby

Kathleen McQuade, of Aberfeldy Opticians in Perthshire, on how she’s planning to juggle running her practice with first-time motherhood

25 June 2020 Lucy Miller
As businesses look towards reopening for routine appointments*, OT is speaking to practice owners about a singular priority they have for the next few months. If you want to be featured get in touch with [email protected]

Who: Kathleen McQuade, owner of Aberfeldy Opticians
Location: Aberfeldy, Perthshire
Priority: Balancing business with a new baby
I had everything sorted before lockdown happened. I knew to the day I was going to finish; when I was roughly planning on coming back - obviously, it'd be a bit naive of me to say a specific date.

Luckily, I've managed to source a locum for cover. But as a new practice, I don't want to disappear into the background either. I still have to have a role to play, to show face in the practice, so that's been part of the plan. Luckily my husband works from home a lot of the time, so we can plan days that I can still come in to do a day here and there, firstly to maintain my skills, and secondly to maintain relationships with the patients and build on what I've been doing, thus far. And just to help oversee the running of the practice.

I'm lucky that I've got a great team that work here, because I'm in that test room from nine to half five at night. You occasionally see me come out at some point in the day, but I've got a good team that I can trust, and know that they'll help with the smooth running of the practice while I’m up to the wee hours in the morning, looking after the baby and trying to grab any sleep as and when I can.

Lockdown has thrown all my plans out of the window. I think it very much is going to be a case of flexibility. I'll have to know that I'm not going to be able to be in control of a lot of things when we go back, and it's just working around that that to find the best solution and keep the practice close to what we've maintained up until now. It's going to be interesting.

The other difficulty that we have up here, being in Highland Perthshire, is that it's difficult to find locums. There was the case of, ‘when are hotels going to open? Will I be able to find accommodation for people that come up here?’ There’s been a lot of that. But I have managed to find someone who is fairly local. That's been a huge saving grace and a huge relief, because I think the locum situation is going to be difficult. There are certainly going to be a lot of people maybe not taking on locums in the same way that they were beforehand. So, it's been good that I've managed to secure one for that period of time.

They're going to be more on the clinical than the business side. Our lens rep is going to organise training for her, to get her up to speed on the lenses that we sell, to ensure there's that continuity of knowledge and products that are being offered.

As a new practice, I don't want to disappear into the background. I still have to have a role to play

I'm lucky - I can see my house from where I'm sitting in the shop, just about. I'm only a minute away, which will be so handy. There'll be a lot of visits from me and the baby, but it will be me still running and managing throughout. Any issues that come up, I'm just across the road. I wouldn't expect the locums to have to take that on. Obviously, they have to take on the responsibility of their own work and manage their own side of things, which is the same in most practices. I'll still be on hand most of the time, hopefully, as long as the baby's not too much of a handful. That's the plan - the soft plan!

It was difficult when it came to taking on the practice, because I was working full time and I was trying to become an independent prescribing (IP) optom as well. Your days off are very limited, so it was a case of, at lunch, sitting there scrolling through contracts and going through it for the lawyers. I'm hoping that will stand me in good stead for multitasking when the baby comes along.


Planning for a second wave

I think the biggest fear is going to be a second wave of coronavirus, if that were to happen. It's trying to plan ahead for something like that. Obviously, it's so hard to plan for these things, as we've all learned. But hopefully we'll have a little bit more knowledge.

When it comes to thoughts of a second wave, I've got to make sure that our finances are healthy for that period of time. You do start to think, are the government going to be able to help us in the same way, with furlough and grants; these kinds of things? Will banks continue to give holidays for loans, especially for new businesses? Most new businesses will have some loan or other that they need to pay. I'd say that is the biggest challenge that I think we could potentially be facing, apart from having a baby. I've got a few weeks yet until that happens, so I think that should hopefully be okay. 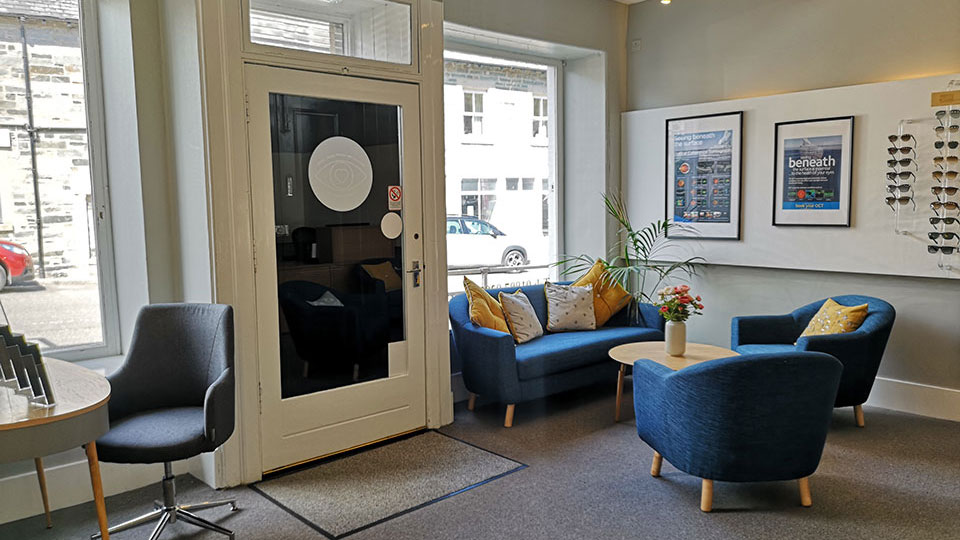 The interior of Aberfeldy Opticians

We're not quite out of this pandemic yet and there's just that element of the unknown to potentially contend with, again. Hopefully not, but that's something that's definitely going to be kept in mind in the coming weeks and months.

We're really lucky, where we are, being isolated from the big cities. But it only takes a couple of people and it can spread like wildfire. People here have been really courteous to one another when it comes to keep two metres apart, and the businesses that have been able to continue running have had queues outside the shop. I think Aberfeldy seems to be quite well-trained in the handling of coronavirus.

I'm lucky in the sense that I've only got one test room to look after; I haven’t got a clinic running. That's the benefit of some independents; you've got a smaller contamination unit to have to manage. And we've got a big shop floor. I don't have any concerns about people maintaining social distancing. I've got two desks set up for the staff when they come back; one is at one side of the room and the other on the opposite side. I don't see any issues. We've got plans in place and training to go through when things open up again, so I feel like we've got that box ticked. But we'll see.

There are three of us: two full-time team members, and one part time member of staff. I'm lucky that I don't have to worry about what staff to bring back and when. Once we're given the go-ahead for business to go back to normal, we'll be back with all the PPE and health and safety measures in place, maintaining some of the aspects of lockdown.

It'll be difficult at the start, but the joy of being self-employed is that you've got that flexibility later on

There will still be a lot of people shielding, so it's a case of being able to continue the triage work that we've been doing over the phone. If we have to see them, it’s being able to put them at ease that the practice is well-controlled, there are hygiene measures in place, that they don't have anything to worry about, that kind of thing. I think we're sorted on that front, but it is the thought of going into lockdown again that is the worry.

It's going to be difficult for the first few months; there's no doubt about that. Just getting into routine with the baby, and then being able to hopefully establish some kind of routine within the first three or four months to allow the freedom to go back to work. It'll be difficult at the start, but the joy of being self-employed is that you've got that flexibility later on. It's going to be tough but hopefully easier in the long run, with that scope for flexibility being something to look forward to.

Getting business back up to normal. I was speaking to one of our lens reps, who was talking about promotions and things like that, and trying to entice more people in order to get back up to where we were prior to lockdown. He was very positive. He was saying that in Ireland and France they're back up to where they were prior to lockdown, if not a little bit more, especially as patients have maybe a bit more disposable income because of the money that they've saved through lockdown. I think one of the things that we'll be focusing on is getting really good offers to entice patients, and to try and get things back up and running and a sense of normality about the place again. I think it's just about being positive about selling again. All businesses in the UK are going to be thinking the same. Hopefully we're in for a good summer and we'll all need sunglasses.

*At the time of publishing Scottish optometrists, such as the one covered in this article, have not yet been given the green-light to open for routine practice