We’ve all done it. Well, at least I have. Taking that stoical approach when encountering the poor homeless soul slumped in a doorway on a miserable winter’s day: eyes forward; quicken the stride; an improvised glance at the watch even. Far too busy. Nevertheless, catch me on a good day, and I will often show a modicum of empathy towards those less privileged than ourselves. In fact, a couple of years ago, prompted by my youngest daughter’s concerns, we decided as a family to take a pro-active approach in trying to help some of life’s more vulnerable folk.

The initial challenge when embarking on this task was to work out what we could actually do to help homeless people in a meaningful way. Buy them a sandwich? A drink? Should we offer money, or will this just fuel a vicious cycle of drug and alcohol dependency? Helping the homeless and identifying individual needs is certainly a complex issue.

As it turns out, in our experience, and perhaps counterintuitively, often the need for food isn’t at the top of the priority list for many in the homeless community. Bedding, clothing, and other daily essentials that most of us have ready and unquestioning access to, such as toiletries, are typically the ‘hot ticket’ items. The lack of structured access to healthcare services is also an obvious concern.

In my role as trustee of a homeless charity in Birmingham I have encountered numerous service users with a range of health issues, for instance, many are unable to chew food due to years of neglected dental hygiene. Others I have met on the streets are in a desperate state trying to cope with severe visual impairment.

As an optometrist something which always strikes me as quite astounding when hearing about these struggles is the lack of uptake of eye tests even among those with easy access to these services. In other words, your average full-time employed, securely housed, Joe Bloggs. And dare I say it – males do seem to be the worst culprits in my experience.

It is worth pointing out that a visit to the local opticians is not just about checking if you need glasses. It is a staggering statistic that one million people in the UK are living with avoidable vision loss. Yet, through a detailed sight test, an optometrist can detect early signs of eye disease even before symptoms appear, which can allow for timely intervention before it’s too late.

The recommendation is to have a sight test every two years, or more often if your optometrist recommends it. Most of us are lucky to have easy access to an optometrist on our high street, and, on a final point to underline how fortunate we really are, many may even qualify for an NHS-funded sight test.

Like food, warm shelter or a front door key, good vision is something we may all sometimes take for granted, but why risk it? 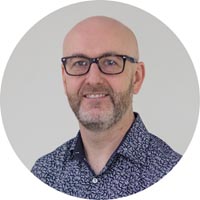 Optometrist, Dr Ian Beasley, is Clinical Editor for Optometry Today, Head of Education for the Association of Optometrists and postgraduate researcher at Aston University