Getting back behind the wheel

From fear and nervousness to excitement and joy via some excessive perspiration, Emily McCormick on re-learning to drive

A few months after my 17th birthday I got behind the wheel of a car for the first time and began to learn to drive. Twelve months, 55 hours (roughly) and two tests later, I was officially a driver.

Just five days after I gleefully clasped the pass certificate in my hand, I flew the family nest and moved to the ‘Big Smoke’ to embark on my next adventure into adulthood – university.

Studying and later working in the capital meant that for the next 16 years, I never had the need or opportunity to be in charge of a vehicle again.

Earlier this month, I got back behind the wheel and took to the roads around the area that I now call home – Reading. For those of you living and driving in the area, fear not, I did not get behind the wheel alone. However, perhaps worryingly, I could have done if I wanted to.

In fact, as a colleague informed me, my 16 license-holding years even made me eligible to teach someone else to drive.

After deciding to start driving again, I knew instantly that I didn’t have the confidence (or skill level) required to simply purchase a car and drive away happily ever after. Having refresher lessons was a no brainer.

Following a 25-minute call to a large lesson provider which involved questions about my needs, experience and circumstances my first lesson was booked. I was even reassured that there are an increasing number of people in my position having refresher lessons after a number of years out of the drivers’ seat. Working in the area that I do, I made a mental note that neither my sight nor my vision requirements was mentioned.

Sliding nervously into the driver seat, a whistle-stop tour of the Highway Code followed, but again, nothing about my vision was mentioned. Could I read that number plate 20m away still? Do I require glasses for driving? Neither were asked, yet I was off on the road.

While a sight test is recommended every two years, it is not compulsory. Therefore, despite the last time I read a number plate being 16 years ago, I could get in a car without question – a discrepancy that the AOP is highlighting in its Don’t swerve a sight test campaign.

According to statistics, there are 2,900 casualties on the roads each year due to poor vision. If I’m honest, reflecting on my re-learning to drive experience, I’m surprised it’s not higher. My next stop was my optometrists for a sight test. 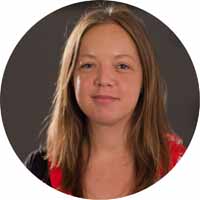 Emily McCormick is the AOP's Deputy Editor and Web Editor