“She had never seen her child’s face before”

One day in 2012, Fatuma left her house carrying her young baby in her arms and walked for more than nine hours, asking directions along the way.

The only information she had to navigate with was the rumour that a doctor was returning people’s sight – a sense she last remembered having when she was four years old.

She arrived at Dr Andrew Bastawrous’ clinic with torn clothes after narrowly avoiding being run over by a lorry.

The co-founder and chief executive of social enterprise Peek told 100% Optical delegates that he could immediately tell Fatuma was blind by the way she navigated across the room.

“She sat down at the slit lamp and when I examined her I saw a very familiar scene. Both eyes were filled with very dense cataracts,” he said.

Staff performed cataract surgery, restoring a sense that Fatuma had been without for more than 20 years.

“As soon as her patch came off she had this big beaming smile. All she could do was stare at her nine-month-old baby. She had never seen her child’s face before,” Dr Bastawrous observed.

Delivering his keynote address, Vision 2020 and a vision for the future of smart eye health, Dr Bastawrous shared that while it was heartening a simple solution could be delivered for Fatuma, there was a sense of despair that she had been unnecessarily blind for so long.

He highlighted that uncorrected refractive error is responsible for the majority of unmet visual need worldwide.

There are far fewer optometrists per capita in Kenya than in the UK, with most eye care workers based within cities.

“As you go out to the more remote parts of the country you can have a single eye care provider responsible for the eye care of millions of people,” he said.

Dr Bastawrous treated 5000 patients across 100 different locations to gain a better understanding of the eye care issues in Kenya.

As soon as her patch came off she had this big beaming smile. All she could do was stare at her nine-month-old baby

He shared that many of the clinics were in remote locations without access to basic services. Of the 100 clinics, 67 did not have a sealed road and 80 did not have a power supply.

Dr Bastawrous shared that hundreds of people would line up for each clinic seeking treatment.

“The majority of people who were in those queues were sight impaired and didn’t need to be,” he said.

Rather than feeling relieved that he could address unnecessary vision impairment for those patients that attended the clinics, Dr Bastawrous began to be troubled by further questions.

“I started to feel that this problem is even bigger than I realised. What I started to question is who else isn’t in this queue? How is this going to work in the longer term?”

A lightbulb moment came when he noticed a patient using a mobile phone in one of the clinics he worked in.

Even though there are limited basic services in Kenya, Dr Bastawrous shared that 80% of people have access to a connected mobile device. 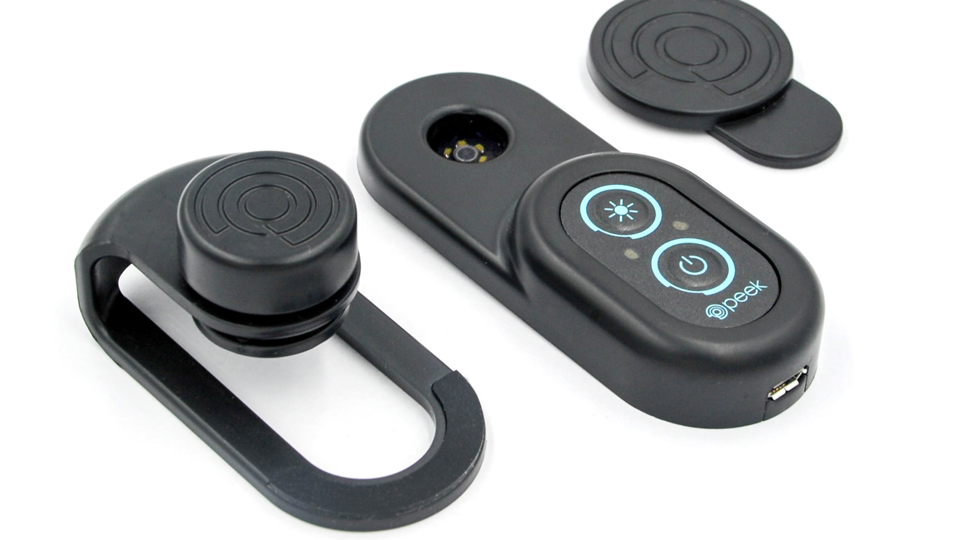 The Peek Retina smartphone adapter
This revelation prompted the development of the Peek Acuity app; a smartphone-based vision test that can be delivered by non-healthcare workers.

“That helped us to work out who couldn’t see but we wanted to understand why people couldn’t see. To do that we needed to get a view of the back of the eye,” Dr Bastawrous said.

The team developed Peek Retina; a smartphone camera adaptor that provides a view of the optic nerve and macula using the camera’s flash.

To highlight the personal impact that correcting vision can have, Dr Bastawrous described his own experience of being fitted with glasses.

He said that his reports described a lazy child who did not pay attention when he was a young child, but his grades improved after he went for a sight test of at the age of 12.

An optometrist fitted him with spectacles after discovering that he was a -8.00 dioptre myope.

“They were pretty shocked at how poor my sight was,” he said.

“I didn’t know that the world could look differently to what I was seeing. I will never forget that moment of looking across the car park and seeing leaves on the trees and the detail of the gravel on the pavement,” Dr Bastawrous shared.

As well as improving his academic performance, Dr Bastawrous found that glasses helped him to perform better socially and in sports.

“Literally everything changed as a result of an invention that is 700 years old. I was not yet aware that such a simple solution was not globally available,” he observed.