The world at your fingertips 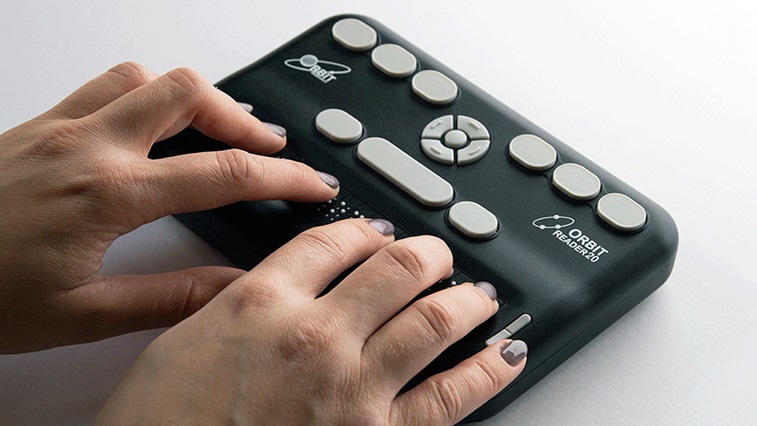 A new device aims to bring refreshable braille to a broader audience by lowering the price point.

The Orbit Reader 20 is a similar size and weight to a single hardback novel. This diminutive device has the capacity to store thousands of books, allowing users to browse their own personal library while waiting for a train, flying to a holiday destination or reviewing notes before an important presentation.

“With the Orbit Reader, you can access books, magazines and journals on a small device that enables you to read as you go,” he shared.

Mr Clarke explained that before the Orbit Reader 20 was launched, refreshable braille devices cost at least £2000.

“We wanted something that was much cheaper than anything that had been in place before,” Mr Clarke said.

Despite having to make some concessions to reach a lower price point, Mr Clarke emphasised that the reading experience, connectivity and braille quality remained excellent.

“For me as a user, I have used many braille displays over the years and one of the issues sometimes is that the dots can be faded or not high enough,” he shared.

“But the braille quality, which I think is one of the most fundamental points of all, is really very good,” Mr Clarke said.

The device enables more blind and partially sighted people to access information and reading materials at the same time as their sighted peers.

Mr Clarke shared that when he was at university 25 years ago, he needed to have someone read books to him or spend half a day beside a scanning machine.

“Historically publications simply haven’t been available to blind and partially sighted people at the same time as they have been to the main market,” he explained.

“You can now simultaneously access a book through iBooks or Kindle at the same time as everyone else. I think that is really important,” Mr Clarke said.

In the first month of sale through RNIB, more than 100 readers were sold.

Mr Clarke said initial feedback on the device has been very positive.

“What I would love to see happen is for it to be widely used in schools, education, employment, but particularly in leisure,” he said.

“It can be quite a hassle to access reading material; sometimes you only have the audio or the braille hardcopy. To give people choice and access to information in a format that they want, where it can truly be a pleasure, would be brilliant,” Mr Clarke concluded.